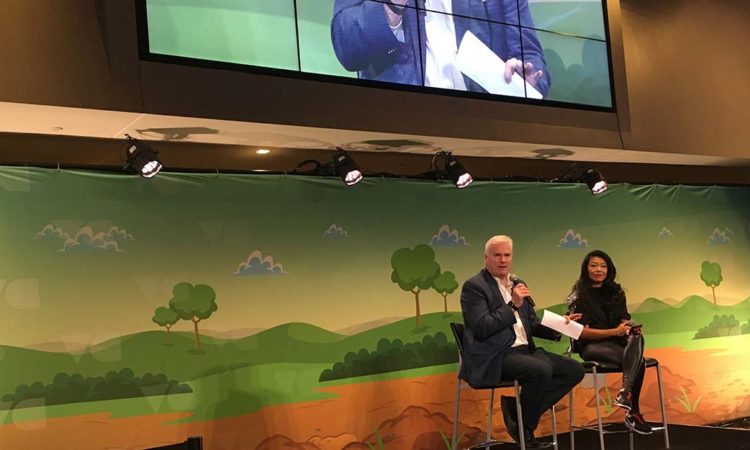 Minnesota congressman Tom Emmer advocates for a hands-off approach to regulating cryptocurrency.
By Dan Niepow
May 23, 2022

To the legions of digital art aficionados and cryptocurrency adherents gathered at U.S. Bank Stadium for the “VeeCon” NFT conference this weekend, Minnesota congressman Tom Emmer had a clear message: I will not stand in your way.

At a Saturday question-and-answer session, the Republican lawmaker portrayed himself as a crypto-friendly lawmaker with little interest in regulating the financial technology.

Alongside environmental concerns, there is the potential for fraud in the NFT marketplace. Even Gary Vaynerchuk, the serial entrepreneur who organized VeeCon, has a blog post on “how to protect yourself from NFT scams.” While some lawmakers would like to see NFTs and cryptocurrency subject to the same regulatory scrutiny as Wall Street banks, Emmer wants the government to take a more hands-off approach. In his view, the technology is transparent enough that it essentially regulates itself. The coding that underlies each NFT is publicly available, though the average person may not grasp how to interpret it on first glance.

If Vaynerchuk is the high priest of crypto, Emmer is perhaps one of its most faithful deacons. Swan Sit, an NFT creator and advisor, introduced Emmer as “basically a unicorn.”

Indeed, amid a slew of celebrities and influencers, Emmer was the only elected official to speak at VeeCon. In Congress, Emmer represents Minnesota’s sixth congressional district, which includes St. Cloud.

Emmer started the session by stating that crypto is “not a Republican or Democrat thing.” He pointed to the Blockchain Caucus, a bipartisan group of lawmakers founded by Colorado Democrat Jared Polis and South Carolina Republican Mick Mulvaney in 2017. Emmer described it as the “go-to group” educating congressional colleagues on the technology.

In addition to the caucus, Emmer also sits on the House Financial Services Committee, which would likely oversee any future regulations on crypto.

“You’re not going to stop this,” Emmer said of cryptocurrency. “This is going to happen with or without government.” His aim, he said, was to ensure that crypto companies feel welcome in the United States.

“I want all of you to stay here and prosper here,” told a packed crowd of NFT aficionados in the suite. That remark sparked rapturous applause from the crowd. “We’ve never heard this from a politician,” said Sit, who interviewed the lawmaker. “Incredible.”

Despite Emmer’s opening remarks about the nonpartisan nature of crypto, his session at times seemed more like a political rally with libertarian leanings. He described the U.S. government’s attempts to regulate finance as a “legalized mob-type business model.” He called the U.S. Senate “a senior citizens’ home” and referred to Massachusetts Democrat Elizabeth Warren as “Senator Karen,” a quip he borrowed from Tesla CEO Elon Musk. Warren, who has pushed for stronger regulation of banks, has expressed concerns about crypto and its impact on consumers.

Emmer said that Warren and several other lawmakers “don’t understand that this whole technology is already transparent.”

“You can see it all,” Emmer said. “Our media even reports it as, ‘you know, this is really scary because Russian oligarchs are going to hide this crypto.’ … We already know where approximately 70 percent of the Russian crypto is, and the 30 percent we don’t know is probably in someone’s wallet, but if they want to move it, we’re going to see it moving.”

When asked about antitrust concerns in light of a recent mega-merger in the NFT industry, Emmer was unfazed. In his view, government regulators are essentially unnecessary intermediaries in the marketplace.

“I think the people out here are going to control this much better than the government has,” Emmer told the crowd, again to raucous applause. “Government can’t enable you. Government is not your answer. All government can do is get in your way and make it more difficult for you to succeed.”