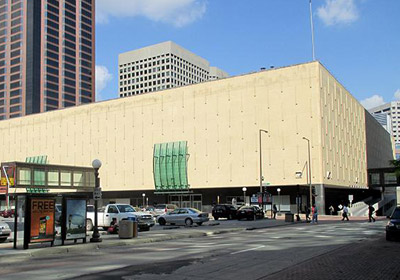 St. Paul And The Troubles Of Redeveloping Awkward Buildings

When the conceptual plan for developing some of St. Paul’s most prime real estate was released in March of this year, it seemed like it could check most of the boxes of any downtown booster’s wish list.

The future outlined in the plan, “Prosper: Momentum is Building,” [PDF] was especially impressive when it came to the block in the center of downtown, where the abandoned Macy's department store site once filled a key block with mid-century mediocrity.

Instead of a windowless block of bricks, there would be glassy office and residential towers, along with a low-rise entertainment and retail complex, including a multiplex theater, a hotel, street-front shops and — if the renderings were to be believed — lots of young and fashionable people.

“While people might have called such a plan for downtown St. Paul far-fetched just a few years ago, today they simply ask, ‘How soon can we make this happen?’” Mayor Chris Coleman said in his state of the city speech that same month.

Now, six months after Coleman delivered that speech, eight months since he urged the St. Paul Port Authority to purchase the Macy’s site and a year and a half after the department store chain announced it was abandoning St. Paul, a different reality is setting in: that the old Macy’s building likely isn’t going anywhere.

It is not from lack of interest. It is, instead, the building itself. After paying $3 million for it, the port authority wanted to tear it down to make it even more attractive to prospective developers. But then came sticker shock: the engineers estimated demolition would cost $13 million.

“In a perfect world, we’d have $13 million sitting around that we had nothing else to do with,” said Lee Krueger, senior vice president of development for the port authority. “We don’t.”

Which means a site the port authority’s sale brochures proclaim as holding the epicenter of downtown remains exactly that kind of building most cities don’t want at the epicenter of their downtown —  it’s big, it’s homely, and it’s empty.

So now what? While the ongoing struggle to develop the site doesn’t change its importance to the redevelopment of St. Paul, it does raise larger questions that aren’t likely to go away, either: about struggles of retail in the city, about the evolution of the city's downtown core (and whether the Macy’s building is itself historic); and about how involved the government should even be in real estate development.