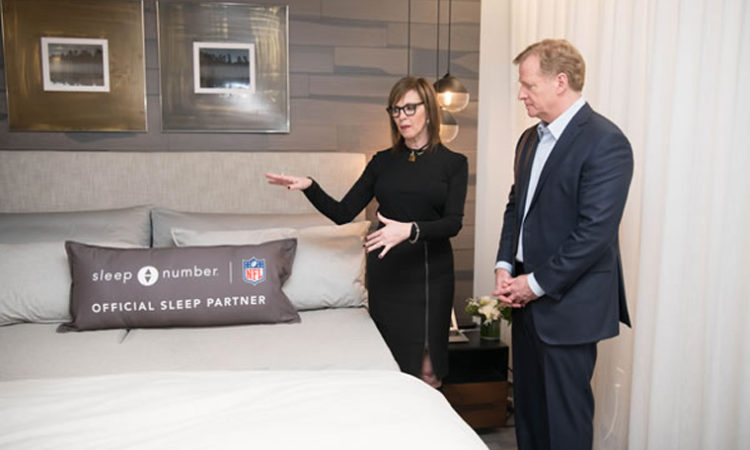 For the next five years, rookie players will also have the option to receive a free Sleep Number 360 Smart Bed when they join the league.
By Sam Schaust
February 01, 2018

Every player in the National Football League was offered a free Sleep Number 360 Smart Bed to take home on Wednesday.

At a news conference at Sleep Number’s Minneapolis headquarters, Shelly Ibach, CEO of the bed maker, and NFL Commissioner Roger Goodell announced the offer as part of a five-year partnership. The league’s roughly 1,700 players will each receive a voucher for one of Sleep Number’s 360 Smart Beds and, according to the Star Tribune, another 300 vouchers will be made available to rookies each season.

By and large, the two organizations believe their partnership will encourage the clubs within the league to better understand how improving sleeping habits can impact on-the-field performance, much in the way scientific measures have been applied to player workout routines.

“We are constantly assessing world-class technologies and partners and know this unprecedented partnership will provide players the ability to improve their performance through individualized, smarter sleep,” said Goodell in prepared remarks.

Sleep Number’s 360 Smart Beds typically retail between $2,350 and $5,700 depending on the size of the bed. While you’re sleeping, the bed collects data like your heart rate and tossing and turning patterns, sends it to an app on your smartphone and scores your sleep performance. Sensors in the bed can even detect snoring and adjust automatically to eliminate the noisy habit.

Before the announcement, both the Minnesota Vikings and Dallas Cowboys had been working with Sleep Number to improve their players' sleep habits.

“We’re excited to make a difference for these world-class athletes as they benefit from our SleepIQ technology and the effortless adjustability of our beds,” Ibach said in a statement. “And we are thrilled to be entering a long-term partnership with a performance-based organization like the NFL.”