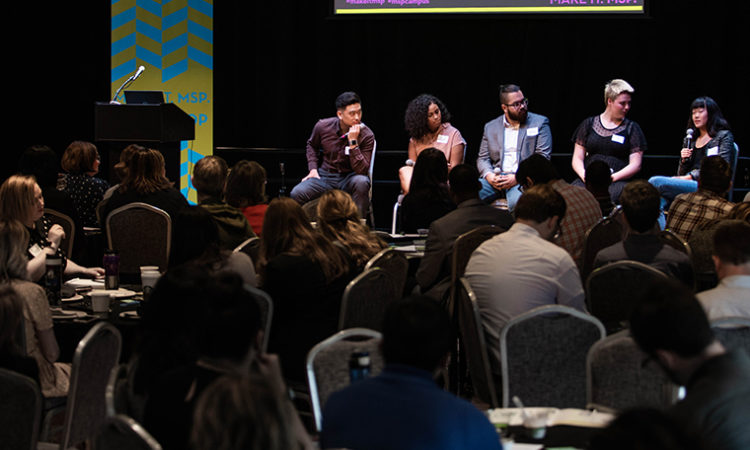 Generation Z has begun entering the workforce. How can companies bring them on board, and keep them?
By Dan Niepow
August 19, 2019

It doesn’t seem like very long ago that “millennial” was the top buzzword in the corporate lexicon.

For years, HR pros pondered ways to attract and engage a new generation of workers who were, well, just a bit different than their predecessors. Millennials – typically defined as those born between 1981 and 1996 – grew up in the shadow of 9/11, amid the explosion of the internet.

In the workplace, millennials usually aren’t lifers, researchers say. They job hop. They look for a meaningful connection to their jobs. And it turns out that the post-millennial generation – known as Generation Z – shares many of the same qualities.

Regional economic development group Greater MSP on Friday held an event in downtown Minneapolis to take a closer look at Gen Zers – and how they might fit into the recruitment puzzle.

About 150 people attended the event, held at 900 Studio. Several Fortune 500 companies sent representatives to the gathering. That included Best Buy, Target Corp, U.S. Bank, and General Mills. The start-up scene was well-represented, too.

The event coincided with the release of Greater MSP’s report on Gen Zers.

Generation Z – broadly defined as anyone born after 1996 – is the most racially and ethnically diverse generation to date: 48 percent of Gen Zers are people of color, according to Greater MSP’s research. In the 30 largest U.S. metros, that number is actually closer to 63 percent, said Matt Lewis, VP of strategic initiatives with Greater MSP.

In the Minneapolis-St. Paul region, about 38 percent of Gen Z residents are people of color.

Like millennials, Gen Zers want to find jobs that align with their own set of values. In a survey conducted by tech startup RippleMatch, more than half of Gen Z respondents said a company’s “mission and values” were key factors in their decision to take a job.

Of course, adequate pay is important to Gen Zers, too. And with good reason: In Minnesota, students are graduating college with an average debt of more than $32,000, according to Greater MSP’s report.

Still, pay isn’t everything. Thirty percent of respondents in the RippleMatch survey said they’d even be willing to take a 10 to 20 percent pay cut to work for a company whose mission aligns with their own.

At Friday’s event, Greater MSP convened a panel of Gen Zers to provide a more qualitative perspective on the data. Panelists agreed about the importance of a company’s mission and value.

Panelists also agreed that some of the old-school methods of recruitment – career fairs, for example – tend to fall flat with the younger set.

“We have been using the same hiring frameworks we’ve been using for decades,” said Philip Xiao, CEO of Homi, a Minneapolis-based recruiting startup. Xiao moderated the Gen Z panel.

“Things are changing,” he added. “You can’t apply the same frameworks used to hire baby boomers to hire this next generation. They’re in completely different places.”

For Gen Zers, it’s often more important to find a personal connection with a company and its employees.

“Intentionality” was another word thrown around quite a bit at Friday’s event. Panelist Jazmine Logan, a program assistant in the city of Minneapolis’s department of civil rights, said businesses can—and should—be more intentional in their efforts to recruit diverse populations. That could mean recruiting from student organizations geared toward specific populations, such as groups for women engineers.

Ollie Kalthoff, another panelist, said companies can do more to make recruiting events and career fairs more accessible. For instance, firms could have interpreters at events for the hard of hearing, or add folks’ pronouns on nametags, said Kalthoff, a student at Century College.

Recruiting Generation Z is simply a matter of “treating people like people,” as Xiao said.

“Hiring is and always has been about people,” he said.