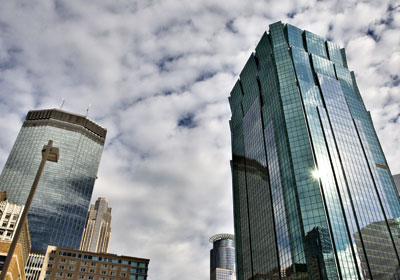 R.T. Rybak: Shoring Up the Foundation

January marks 10 years in office for Minneapolis Mayor R. T. Rybak. During his tenure, the city has reduced its debt by $200 million while weathering two recessions and a significant decline in revenue. It also has achieved a drop in serious crime; increased high school graduation rates—especially among Hispanics and Asians; landed the new Twins ballpark; and maintained a quality of life that continues to earn “best of” designations by various major media.

How much credit does the mayor deserve for all of this? Actually, quite a bit. Despite the city’s “weak mayor” leadership structure, Rybak sets the budget, and has veto power over the City Council (a mayor in a typical weak-mayor system does not). More important, he says, is his ability to create coalitions and partnerships that transcend often fractious (different shades of DFL) city politics.

We sat down and talked about his first ten years in office.

When you ran for mayor, what were the initiatives where you told yourself, ‘If I’m elected, I’m going to hit these?’ And how have you done?

I grew up in a city that believed in itself and did big things. And one of the reasons I ran is I felt that we weren’t reaching high enough, and weren’t getting enough big things done.

So the points I made back then were that we needed to quit subsidizing so many individual projects and do more to help build the common infrastructure that helps everybody succeed. The second thing I talked about is that the city should be doing more to get the work force ready for tomorrow. So in those two areas, we’ve done a lot.

We put a screeching halt to the very liberal use of tax increment financing to fund many different projects, and instead used it only in a couple of key spots that I think are very defensible [Denmark-based Coloplast, which relocated its North American headquarters and 600 jobs to Minneapolis; and Midtown Exchange on East Lake Street, where Allina Hospitals and Clinics relocated 1,600 employees, and Midtown Global Market became home to 60 small-business food vendors].

What have you done to spur economic development in Minneapolis?

We shifted resources into things like the Two Percent Loan Program, which has stimulated scores of small businesses around the city—corner stores, new restaurants, new one-of-a-kind businesses. [The program has made 1,000 loans totaling $28 million, which have helped create 2,000 jobs and retain 9,000 jobs. It provides financing to small businesses to purchase equipment and make building improvements. A private lender provides half a loan at market rate, and the city provides the rest, up to $50,000, at 2 percent interest.]

We focused more on the common ground. I’ll give an example. Instead of putting our time and our money into an individual project, we focused on getting $130 million in federal funds to remake Marquette Avenue and Second Avenue South into transit corridors that dramatically sped up the rate at which buses can come into the center of town, delivering more riders than a new light rail line. That helped us attract businesses who came to the city not because of a check from us, but because they had better access to downtown.

We also took an idea that had been on the table since way back in the ’80s, when I was with the Downtown Council, and made it happen—the creation of a Downtown Improvement District . [The DID is a nonprofit that provides services to make 120 downtown blocks cleaner, safer, and easier to navigate. It has assisted 212,637 pedestrians, picked up 2.4 million pounds of street litter, and saved more than 24 lives since it launched in 2009.] There’s a friendly face out there on the street. And those little things benefit everybody and positively impact economic growth.

What’s been your greatest achievement as mayor?

The Minneapolis Promise. No question. It’s seeing thousands of kids get a better future.

Seven years ago is when we started the Minneapolis Promise and when we began saying to ninth graders, ‘Every kid has to develop a life plan’. We’ve really focused on that, and graduation rates for kids of color are going way up. I’m not in charge of the schools. But we said, ‘OK, that’s one thing that we can really focus on and move the dial.’ In the past seven years, I’ve spoken to every ninth grader in Minneapolis schools about careers. That’s my favorite thing to do.

For those who may wonder, why is this important for our economy?

I can guarantee you, I will be able to walk through the skyway system 10 years from now and see a more diverse work force filled with kids from Minneapolis schools who’ve been through their Step-Up jobs and are working at every good business in the city. I can also guarantee that those businesses are going to be more competitive globally because of the language and cultural skills of their employees.

You mentioned that Minneapolis wasn’t reaching high enough before. In the last 10 years, what are two instances in which it reached as high as it should?

Workforce development is one piece of it. The other would be Access Minneapolis, our vision for transit—fusing light rail and bus rapid transit and making Minneapolis the number-one bike city in America. Six years ago, we envisioned all this, and we’re implementing it, even though we have gone through a period where resources have shrunk so dramatically.

Let’s talk about those resources. The city’s revenue streams are likely to decrease again as the economy stays soft. How do you maintain what you’re doing and go even further with fewer resources?

I knew there were some financial problems when I came into office. But in the first couple weeks, my jaw was almost on the floor. I had no idea it was as bad as it was. By month two, it was really clear that we were going to have to change our focus. And I was going to have to spend a lot of time fixing the finances.

We went to the core issues. The first was debt. As of [2011], we have paid down $200 million in debt. We’ve been able to weather really serious times because we’re not carrying the debt we did 10 years ago. That meant we restored our bond rating. That meant it cost us less to raise the money to repave the streets. And that meant we could launch a new program to invest in infrastructure.

We also had to shrink the size of the city’s work force from 4,100 to 3,600. A lot of really talented people lost their jobs. And we had to dramatically reshape the way work is done around here. But we did so by launching outcome-based management, where we have metrics for every department that are tied to our budget and the performance reviews of our department heads.

What’s been your biggest mistake since taking office?

We didn’t make the progress I wanted to see with our ability to increase retail downtown. We still haven’t figured out whether [the solution] sits in the private sector or the public sector. But somehow, we’ve got to do a better job with it.

What specifically do you want to go after next?

I want to raise the bar. We should be one of the, if not the greatest American city of this time. That seemed delusional a decade ago. It’s achievable now, which makes me anxious to get there.

We should be creating more jobs and incubating more small businesses. I don’t want one of the largest gaps between haves and have-nots in the country.

We talked about how important that is in general, and we talked about the lack of resources going forward. Are there some specific partnerships that you’re looking to do more with, either with companies or individuals?

Well, one partnership is with the president. The federal dollars brought in since he became president have doubled. It’s also been great to have a governor who doesn’t want to find a way to bash Minneapolis. There are also all the foundations and the businesses and the nonprofits, many of which didn’t know me when I came in 10 years ago. We’re now deeply engaged on various projects with them.

You know, Minneapolis is like a family—sometimes a slightly dysfunctional one, but one that, if you somehow can pull it together, isn’t about one person but about the whole thing.