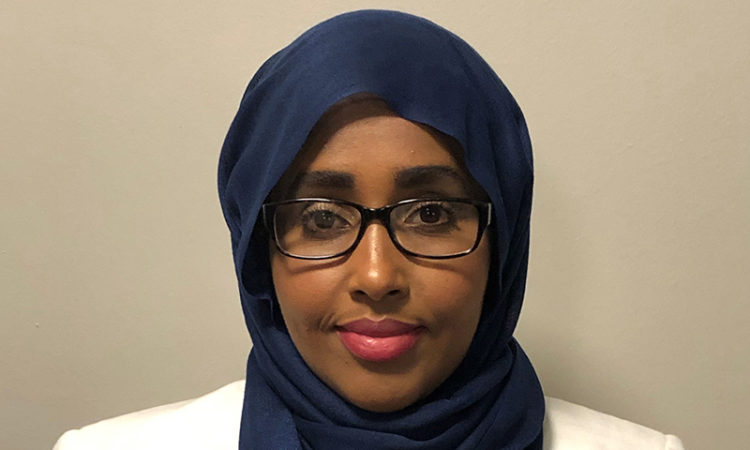 Anisa Hajimumin has her work cut out for her as the state’s new assistant commissioner of immigrant and refugee affairs. Working under Minnesota’s Department of Employment and Economic Development, she’ll examine long-running systems and policies that make it difficult for immigrants and refugees to find work or start a business.

But Hajimumin appears equipped for the job, having founded and led two businesses that provide support to communities of color, immigrants, and refugees.

She also previously served as the minister of women, development and family affairs in the Puntland region of Somalia, where she drafted and facilitated the passage of Somalia’s first bill to prosecute sexual offenders. Through Hajimumin’s leadership, Somalia was the first African country to sign onto the campaign to end female genital mutilation. As minister, she also directed a program to prevent human trafficking, established a social protection program for women and children, and coordinated the building of a center serving people with disabilities.

After immigrating to Minnesota in 1996, Hajimumin earned a master’s degree in public administration from St. Paul’s Hamline University. Her new role is supported by a collaborative grant between DEED and the governor’s office.

Entering into the new role in a tumultuous time, Hajimumin is focused on eliminating fear, removing obstacles, and advancing engagement.

TCB: What are your primary goals, plans, and intentions for the new position?

Hajimumin: I will be focusing on interagency efforts to promote inclusion for immigrants and refugees in Minnesota, and particularly workforce development, which will be the guiding priority. So my team will be able to coordinate interagency efforts in identifying and removing systemic barriers preventing immigrants or refugees from fully participating in Minnesota’s workforce. We’ll also be listening to the problems that refugee populations are facing and how DEED can help find a solution.

Q: How will your previous work and experiences inform your work in this new role?

A | Since I moved to Minnesota in ’96, I have been an active supporter and advocate for immigrant and refugee growth and development here. I went to school here, I grew up here, I’ve spent most of my life in Minnesota, and I’m an immigrant myself, and someone who’s experienced as an entrepreneur, with business executives, and governmental leaders. I served as the minister of women, development and family affairs in Somalia, which is equivalent to the U.S. Department of Health and Human Services, establishing policies and looking at how systems and policies have affected women and children and marginalized communities in Somalia. There are similar things that are happening here. And that is something I’m prepared for. It’s something that I feel I’ve done in the past, which will help me with my experience and educational background doing the same thing: examining state systems and policies that we have here. What is preventing immigrants and refugees from finding work or starting their own business? And how can we have a dialogue between state officials and community members and get on the same page?

Q: Could you talk a little bit more about the similarities that you see from your work in Somalia to what your work will look like in Minnesota?

A | The immigrants and refugees here are minorities. And in Somalia, I was part of the majority advocating for marginalized communities, establishing policies pertaining to the female genital mutilation, and the sexual offense law.

That helped me understand how to advocate for others that are feeling marginalized. But when I’m here, I’m also considered a minority person, or a member of the community, and it’s something that I feel like I’ve experienced on both sides. But on a policy level, I believe that Minnesota is a place where families are all welcome, regardless of background and ethnicity, but there are systemic barriers. And with those, it’s something that’s universal. However, here in the United States, in general, and particularly Minnesota, we have systemic racial obstacles for people of color, especially immigrants or refugees that were not born and raised here. … It’s quite confusing. And it’s something I myself have also faced in the past. You’re coming to a new country, you’ve learned the language, but also you’re understanding the culture, and then you’re trying to fit in and still trying to strive in life educationally, financially. And successfully establishing that essential level requires you to have to work three times more than the person born and raised here.

Q: What are some of the biggest hurdles you see to the things that you’d like to accomplish as the assistant commissioner?

A | I would say I’m focusing on DEED’s effort to combat Covid-19 and how the state overall is affected economically. But also particularly looking at how immigrants and refugees are affected by the civil unrest and Covid-19. And on top of that, also engaging with employers that are hiring and hearing from immigrants and refugees. They’re good candidates to be hired––but what obstacles are they facing? There are a lot of immigrants and refugees that have been educated in their homeland. But when they come here, their degrees or educational background or experience aren’t considered enough qualification for them to be hired for the profession that they’ve been trained for. For example, many of them are now driving Uber and taxis just to make ends meet. So looking for ways to collaborate with the employers, with the education system, and go from there.

Q: In general, people aren’t as trustful of the government institutions as maybe they have been in the past, and immigrants and refugees face those barriers to access. What are some ways that you’re going to be looking to address those things?

A | The whole thing that has held us all apart is fear. And with fear, we will not be able to reach any goals or establish any results. And for me as an immigrant, and somebody who herself is a Minnesotan, a Somali citizen, and a Somali American, I don’t have that fear and I don’t want to have that fear. Because I want people to face me and say, despite their skin color, I want to be educated about what’s happening within the immigrant and refugee communities. And there is no stupid question. Not only that, I want to be able to engage with the immigrants and refugees to come out and partake in the educational processes in informing other Minnesotans.

I am very optimistic, despite what’s all happening. I am part of the state, yes. But I am hired to address these issues, I’m hired to work as the liaison between the governor’s office and these communities. And so my job cannot be a place where I am fearful. It has to be something that I’m courageous enough to speak to anybody and talk about this. And the thing is, it’s something I’ve experienced. Working as a minister in Somalia, I was able to sit in front of traditional leaders that did not want to hear from a woman, let alone a diaspora female who was educated abroad. So, if anything, I’m more fired up to really do this and go out there and talk to people. This is my second day in office, and I’ve already got things to put together to hopefully start next week to be engaging with the community members, and start these conversations.

Q: Is there anything else the business community should be aware of as you’re moving through your new responsibilities?

A | We just want to get people engaged and have them talk and engage with the government members. We’re trying to make a difference, so let’s hear the problems so we can establish the solutions.