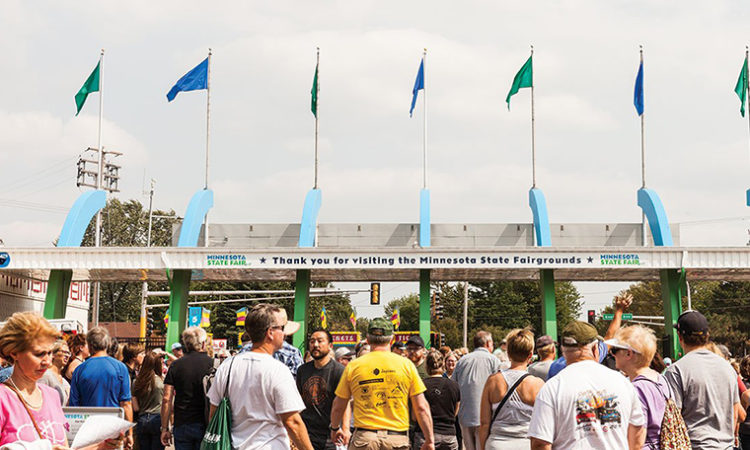 A crowd at the Minnesota State Fair in 2018 (Photo by Caitlin Abrams for Mpls.St.Paul Magazine)

Minnesota State Fair Is Off

The Great Minnesota Get-Together has been canceled.

On Friday, the Minnesota State Fair’s board met and decided to cancel the 2020 fair. In a statement, general manager Jerry Hammer acknowledged that the decision will affect “thousands of businesses and tens of thousands of people whose talent, dedication and love bring the fair to life.”

But, he added, canceling the fair is “the right thing to do.”

“No one knows what things will be like at fair time, but we need to make decisions now based on what we know today, not how we hope things will be in August,” Hammer said. “And right now, all of the science says that if things go well, we’ll still be walking very carefully in three months.”

It’s the first time the annual event has been canceled since the 1946 polio epidemic.

In an extensive FAQ, fair officials laid out their reasoning for canceling the fair. They had considered limiting attendance, but ultimately decided that a socially distant fair would be “financially sustainable” for the fair or its vendors.

“Consider all the Herculean efforts that businesses and organizations are undertaking to start or keep their operations running, then multiply that by our thousand booths, stages and exhibits and other spaces – and then add in tens of thousands of guests,” fair officials wrote. “That is the scope of what the fair encompasses.”

The fair, which had been scheduled for Aug. 27 through Sept. 7, would have taken place after the projected peak in Covid-19 cases in Minnesota, according to state health officials’ estimates. (State leaders have projected that the virus will reach its peak sometime in July.)

Still, it’s hard to imagine effective social distancing at an event that draws thousands of Minnesotans each year. In 2019, the fair logged a record 2.1 million attendees, up from a prior record set just the year before.