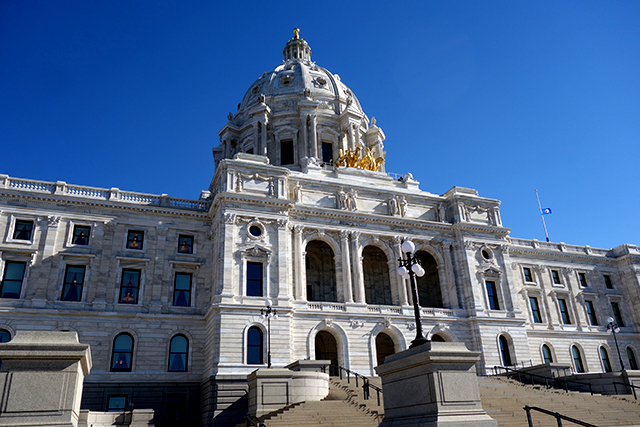 Minnesota Gets Another Divided Legislature. Why?

The state has a relatively non-gerrymandered legislative map. And with Minnesotans once again voting for divided government as the state heads into redistricting next year, things are likely to stay that way.
By Peter Callaghan
November 19, 2020

It is a disconnect in Minnesota election results that makes some people suspicious: Minnesota has consistently given its statewide vote to DFL candidates while at the same time giving Republicans control of one or both chambers of the Legislature.

In many states, such results are evidence of gerrymandering: the practice of drawing often comically-shaped districts to give advantage to one party; that it doesn’t seem right that a party can win more votes statewide but not control both, and sometimes neither, of the chambers of the Legislature.

Often the evidence that something potentially sinister is afoot comes from next door: In 2018, Wisconsin Democrats won a majority of the statewide vote and swept statewide offices. And yet Republicans saw the size of their state House delegation reduced by just a single seat, going from 64 to 63 seats (of 99 total). In fact, because of the way the state’s legislative districts are drawn, as the Brennan Center for Justice has written, “Republicans are a lock to win 60 percent of statehouse seats even if they win just 48 percent of the vote.”

So is the same thing happening in Minnesota?

Probably not. Wisconsin’s legislative district lines, after all, were drawn by Republicans after a 2010 election in which the party won control of the state House and Senate as well as the governor’s office. That gave the GOP all three seats at the redistricting table, a trifecta that partisans dream of. Minnesota, by contrast, hasn’t experienced a similar trifecta in decades.

When redistricting has been an issue in Minnesota, both parties have been involved. And while that could create an atmosphere for compromise, more often it has meant stalemate. And when the parties haven’t agreed, the state courts have stepped in.

That has provided a relatively non-gerrymandered map, one with more competitive districts than typically occurs in states with one party control, a phenomenon that is likely to reach its fifth decade next year when the 92nd session of the Minnesota Legislature convenes. Democrats will hold the House and the governor’s office; Republicans will hold the Senate.

Todd Rapp, a political and business consultant, has tried to analyze Minnesota’s penchant for divided government. In 15 of the last 16 presidential elections, Minnesota favored the Democratic nominee, the nation’s top ratio for blue electoral performance. But in 15 of the last 16 state elections (which happen every two years), voters gave each party control of at least one branch of state government. That too is tops in the United States over that period.

Do Minnesotans just prefer divided government? Rapp said he doesn’t think so. Instead, he points to the redistricting maps drawn under court supervision. Because of the tendency for people to live with people who are like themselves — culturally, socially and politically — Minnesota has concentrations of DFL voters in the Greater Twin Cities and a concentration of GOP voters in Greater Minnesota.

In the Senate, the DFL has five 80-percent-plus supermajority members while the GOP has none.

Does the DFL waste votes in these districts that could, if spread around to other districts, help it win legislative majorities? Perhaps. But Rapp said he isn’t sure how a new map could disperse Twin Cities voters to outlying districts without practicing what everyone claims to oppose: gerrymandering. “We’ve just grown to want to live near people who are relatively similar to us or live the lifestyles similar to what we live,” Rapp said. Politics track closely with those characteristics and demographics.

The DFL vote is so heavily concentrated within the I-494/694 beltway that it’s not a matter of drawing districts with some city and some suburb, he said. They would have to reach out into the second and third ring of suburbs.

But there are legal rules and standards that would endanger such a plan when it inevitably is taken into court by the party disadvantaged by it. The U.S. Constitution and Supreme Court have set down standards for interpreting the provisions on redistricting: districts should have equal population; they should be contiguous and compact; no attempts should be made to either congregate or divide minority groups; and efforts must be made to keep cities and towns and communities of interest together.

But last year, the Supreme Court rejected requests to rule that overt partisanship in protecting incumbents or drawing lines to advantage one party over the other is unconstitutional. Those are political questions, not judicial ones, a 5-4 court ruled.

Instead, Minnesota and other states fought it out in the 2020 election in hopes of either controlling the process or keeping the other side from controlling it. After Republicans succeeded in taking a majority of statehouse in the 2010 election and used it to draw favorable congressional districts, Democrats vowed to not ignore those races this time. Yet despite spending hundreds of millions, Democrats made not a single gain around the country, not even what was considered the lowest-hanging fruit — the Minnesota Senate.

But while the GOP kept the Senate, it can only use that position to block DFL-leaning plans, not hope to succeed in passing one of its own.

A long history of court involvement

If the House and Senate can’t agree on restricting plans — one for legislative districts and one for congressional districts — they don’t go to the governor. Even if the Legislature does approve maps, as the GOP-controlled House and Senate did in 2011, a governor can disagree and veto, as DFL Gov. Mark Dayton did that year, and once again the courts stepped in.

In a paper looking at the history of Minnesota redistricting, House Research analysts Senate attorney Alexis C. Stangl and House research analyst Matt Gehring note that the courts have intervened in the legislative maps after each Census since 1970, and in each congressional map since the 1980 Census.

Some states turn the task over to non-partisan or bipartisan commissions. Fourteen have created commissions to do the job, six others have commissions that advise the Legislature and five have backup commissions that step in if the elected politicians fail. But even commissions can be partisan, with the parties involved either as staff or as commissioners who take voting data and incumbency into consideration.

Minnesota has talked about creating a commission but has never adopted one. Many of the states with commissions are also states with initiative powers retained by voters, and commissions have come from voters, not legislators.

The Princeton Gerrymandering Project was formed to help states understand and eliminate partisan gerrymandering. “The American people nationally as well as locally seem to prefer divided government, which, as a nonpartisan organization we do notice that when government is divided among various parties, gerrymandering tends to go down,” said Jason Rhode, national coordinator for the project. “It doesn’t mean it’s eliminated, it just means people are more-likely to be considerate of where they draw the district lines.”

Zachariah Sippy, an analyst with the Princeton Election Consortium (which is related to the Princeton Gerrymandering Project) said even if courts draw lines, there could be standards established to look at and address over-concentration of party votes in single districts. In Minnesota, DFL candidates for the Senate gathered more votes collectively than GOP candidates but are still in a slim minority there.

“Even non-partisan maps can sometimes not actually be fair,” Sippy said. The court-plan didn’t gerrymander in favor of the GOP, he said, but it had a bias toward drawing the most-compact districts “it is possible you could create a rural bias and an urban disadvantage.”

One measure of this phenomenon — over-concentrating one party’s votes in a handful of districts so as to limit their impact on neighboring districts — is called the efficiency gap. Created by a University of Chicago law school professor and a research fellow at the Public Policy Institute of California, the metric measures so-called wasted votes as a means of determining the partisan fairness of a state’s map. By that measure, the current Minnesota lines are relatively fair and wouldn’t meet the test of a gerrymandered map.

The Princeton Gerrymandering Project had pushed legislative candidates to sign a pledge to support a fair process. But because it anticipated that the DFL would win the Minnesota Senate, it concentrated on winning pledges from a handful of DFL challengers. Six signed, but only two of them won, and the DFL did not win a majority.

So it appears that Minnesota will once again employ its most familiar weapon against gerrymandering: divided government. “We’re strange,” Rapp said “I can’t prove to you that Minnesota likes purple government. But somehow we keep ending up with it.”

What the Loss of Rural Democrats Means for the DFL