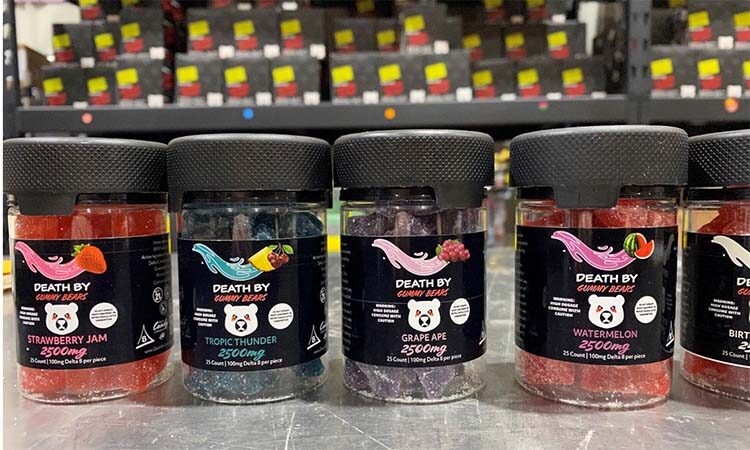 The state alleges that Northland Vapor was selling products with THC levels above legal amounts. Minnesota Department of Pharmacy

The Board of Pharmacy is seeking the destruction of over $7 million worth of THC edibles that exceed state limits.
By Winter Keefer
December 05, 2022

Large images of gummy-bear-shaped edibles containing 100 milligrams of THC per serving were on display at the state capitol Monday as the Minnesota Board of Pharmacy announced a civil lawsuit against companies out of compliance with current state laws.

The lawsuit filed in Clay County District Court is against Moorhead-based Northland Vapor, which encompasses Northland Vapor Company Moorhead LLC, Northland Vapor Company Bemidji LLC, and Wonky Confections LLC. Since at least July 1 of 2022 – the day that Minnesota’s THC regulatory law went into effect – the defendant companies have been selling edible cannabinoid products that contain up to 50 times more than the current state limits of 5 milligrams of THC per serving and 50 milligrams per package, Board of Pharmacy officials said at a Monday news conference.

In addition to exceeding legal THC levels, the products flagged by the board include brands like “Death By Gummy Bear,” which – you guessed it – are shaped like gummy bears. Under state law, edible cannabinoid products must not resemble or contain cartoon-like characteristics that appeal to children.

In the lawsuit, the Board of Pharmacy is asking the court to order the defendants to destroy over $7 million worth of edible THC products. These products were found when the board and the U.S. Food and Drug Administration conducted a Nov. 8 joint investigation and site visit of the defendant’s manufacturing warehouse facility in Moorhead. The FDA had filed a complaint with the Minnesota Board of Pharmacy over incidents with the companies’ products in other states. That included one death, though it has not been determined that the death had anything to do with THC consumption.

Tyler Leverington, attorney for the defendant companies, wrote in an email to TCB that the state “strongly inferred” at the news conference that a Northland product was responsible for the November 2021 death of a man in West Virginia. But everington said a document buried within the state’s own exhibits stated: “Toxicology report showed [the West Virginia man] had no traces of the Delta-8 in his system…”

“Why is the State of Minnesota using the death of a young man nearly 14 months ago in West Virginia to justify its tactics while possessing a report explicitly stating the young man had no Delta-8 in his system?” Leverington asked.

In an original statement addressing the lawsuit, Leverington wrote that Northland Vapor Company is a small, family-owned business with over 60 employees. Northland, a 10-year-old company, attempted to work with the state after this year’s law change, he wrote.

“The state worked with other businesses in the industry but someone decided Northland should be made an example of,” the statement reads.

Further, Leverington wrote that there is no evidence of any harm arising from the proper use of Northland products, calling state efforts to suggest otherwise “misleading and shameful.”

During the November investigation, Northland Vapor president Brad Erpelding acknowledged to the board’s surveyor that the defendant companies manufacture and sell edible cannabinoid products that are not compliant with Minnesota law, the lawsuit states. However, the lawsuit says Erpelding claimed that the company sold only Minnesota-compliant products in Minnesota. The surveyor visited one of the company’sretail sites in Moorhead that same day; the non-compliant products were found on display for sale with customers in the store actively purchasing products.

It is unclear if these non-compliant products were being sold prior to July 1, Board of Pharmacy surveyor Aaron Patterson said at the news conference.

However, the statement from the company’s attorney suggests Delta 8 products had been produced by the company prior to July 1.

While this year’s law change has seemed to spark a rise in hemp-derived THC products across the state, the idea that these products are entirely new is a misconception. THC, the psychoactive component in cannabis plants, has actually been legal in some form in many states – including states that have not legalized recreational marijuana – since the 2018 Farm Bill went into effect. The law defined hemp as a plant containing no more than 0.3 percent of Delta-9 THC and removed hemp from the Controlled Substances Act. This created a loophole that eventually led to the “Delta-8” craze across the country. Delta-8 is simply a derivative of Delta-9.

Many, though not all, of the flagged products in the Monday lawsuit are Delta 8 edibles that contain more than 5 milligrams of THC per serving and 50 milligrams per package. Prior to the July law change, these products would have been legal in the state, Patterson confirmed.

State legislators updated the THC law in an attempt to regulate the industry. Lawmakers are grappling with a mostly unregulated market first opened by the 2018 Farm Bill.

The Board of Pharmacy is tasked with enforcing the state’s new THC law but has been clear from the state that it is not equipped for the job. The board employs just 23 people. The board’s executive director Jill Phillips has advocated for the state to create a centralized cannabis management office.

“To our fellow Minnesotans, we encourage you to be cautious when purchasing and consuming edible cannabinoid products,” Phillips said.

There have been 46 complaints filed in the state so far since July. Usually, when a complaint is filed, a state official will go to the company subject to the complaint and work to guide it into compliance, Phillips said Monday. This is the first time a civil lawsuit has been filed by the board in response to a complaint. This particular complaint was brought to the board’s attention by the U.S. Food and Drug Administration.

Editor’s Note: This article was updated on Dec. 7 to include comments from Northland Vapor’s attorney.