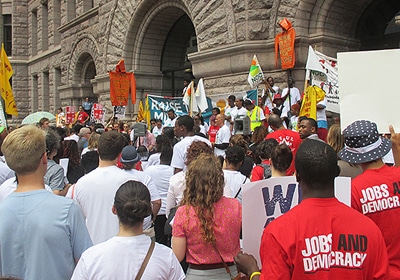 While the council appears united on issues like mandatory sick leave and fair scheduling rules, there is no consensus on whether Minneapolis should go it alone on a higher minimum wage.
October 02, 2015

Minneapolis will take another step Tuesday in its rather deliberate path toward joining other cities nationally in crafting local laws on worker rights and the minimum wage.

The City Council will consider commissioning a $150,000 study into the effects of the state’s largest city going it alone on a higher minimum wage than the state requires. The request for proposal comes 10 days after the council posted two drafts of early proposals to have the city enforce mandatory paid sick leave and so-called fair scheduling.

All three steps are part of a push begun last year by several members of the City Council and advocated by Mayor Betsy Hodges in her April 2 state of the city speech. There is general consensus on sick leave and scheduling — two planks in Hodges’ Working Families Agenda. All 13 City Council members sponsored an ordinance April 17 directing city staff to draft proposals for council discussions.

There is less agreement on the minimum wage. Some members want to push ahead, but others are closer to the position taken by Hodges — that the city’s economy isn’t dominant enough in the region and isn’t isolated enough from neighboring cities to have a higher minimum wage.

“… Minneapolis alone doesn’t dominate our region the way Seattle, Chicago and New York dominate theirs,” Hodges wrote on her blog in February. “We are also unique among metro regions in having two core cities, not one, and suburbs that are home to significant numbers of minimum wage jobs as well.

“I believe Minneapolis going alone on a minimum wage increase in this environment doesn’t make strategic sense for the long-term health and prosperity of the city,” Hodges wrote.

Advocates for a higher minimum wage take issue with the claim that a higher wage in Minneapolis will drive jobs out of the city or put employers out of business. They point to other cities — including Seattle, San Francisco and even the small city of SeaTac that surrounds Seattle Tacoma International Airport — that have not reported ill effects. Resolving the disagreement on the economic impacts is one of the reasons for the study, said Council Vice President Elizabeth Glidden.

Glidden, who is chair of the committee of the whole that will handle the Working Families Agenda discussions, said that while she expects a vote on sick leave and scheduling ordinances by the end of the year, there is no timeline for minimum wage. The study results aren’t expected until early spring, and Glidden said she has no sense of what the council might do on the issue at that time.

“We’ll do a study and see what the information tells us,” she said. According to the request for proposal, a consultant will be asked to look at the impacts of a higher minimum wage in Minneapolis alone and also at the impacts of a region-wide minimum wage that is higher than the state’s $9 per hour. The study will look at both a $12 wage and a $15 wage — both phased in over five years.

Among the details sought from a study are these: which workers would benefit from the higher wage, a look at potential job creation or job loss as well as business retention and business losses and a look into unintended consequences “such as shifted costs and impacts on benefit eligibility and tax credit eligibility.

Finally, the study should look at options for enforcement of a local minimum wage.

Council Member Alondra Cano, one of the first to advocate for a higher minimum wage in the city, said she thinks the study will help answer questions raised by opponents and proponents. “I think it’s a positive step,” Cano said. “We’ll get needed information and be able to make a more-informed decision.”

Specifics on sick leave, scheduling
The sick leave and scheduling issues are further along but Glidden stresses that the drafts presented by city staff are not yet draft ordinances and are meant to further the conversation with both the business community and worker advocates. The details are very similar to a bill introduced during the 2015 legislative session by House Minority Leader Paul Thissen, DFL-Minneapolis.

The sick-leave draft would cover employers with even a single employee and require that workers earn one hour of paid sick leave for every 30 hours worked. Employees of workplaces of 21 workers or more could accrue 72 hours of leave a year. Employees of smaller workplaces could accrue 40 hours. In both cases, unused leave could be carried over to the next year.

The fair scheduling draft would create local rules for how far in advance workers would know their schedules, would allow them to refuse shifts not included in that advance schedule, would require they be paid extra “predictability pay” for hours worked outside the advance schedule and would give employees protection against retaliation for exercising the rights in the proposal.

In the introduction to the draft proposals, paid sick leave is presented as both a public health issue and a fairness issue. Workers without paid sick leave might go to work sick and spread viruses and other illnesses throughout the community. And jobs without paid leave tend toward the lower-paid jobs that are held disproportionately by women and people of color.

The scheduling issue has been gaining traction across the country as businesses — especially in retail, custodial services and restaurants — require workers to adjust to last-minute schedule changes or cancellation of shifts. Such unpredictability is a hardship for workers with children or other obligations such as schooling.

City staff and elected officials have been working on the issues since April when they were directed to develop proposals and to design “a robust stakeholder engagement process that includes workers, businesses” and other interested people.

Unions, Chamber at odds
A coalition — #MPLSWorks — that includes labor unions, civil rights organizations and community groups has been advocating for the minimum wage and worker rights ordinances since last year.

Anthony Newby, executive director of Neighborhoods Organizing for Change, which has been advocating for the working family agenda, said the lack of benefits are “racialized,” hitting people of color — especially women of color — harder. They need to have paid time off — just as higher-paid workers do — not just for illness but for their kids' school conferences, for family emergencies and time for vacation.

Newby said the details of the drafts are positive, but he is alert to loopholes and carve-outs that limit the effectiveness. He does think that phase-ins of requirements for small employers make sense. And he said he expected that the minimum wage issue would take a slower path and that the study is the “smart thing to do.”

“But our research shows there are numerous benefits and few drawbacks,” Newby said. And the higher wage would directly address the distressing Census data released last week that black Minnesotans are not sharing in the improved economy — even seeing incomes dropping.

“This gets at the heart of racial disparities,” Newby said.

In May, a coalition of business organizations wrote Hodges and the City Council that they would like to be involved in those discussions.

“It is fair to say that we come to this discussion with a degree of wariness about how the broad ideas put forward can be fashioned into reasonable, enforceable regulations given the diversity of workplace setting and the employers of the city,” stated the letter signed by groups including the Minneapolis Regional Chamber of Commerce, the Minneapolis Downtown Council and the state restaurant and lodging associations.

Todd Klingel, president of the regional chamber, said Monday the business community is trying to talk to council members about the effects on individual businesses of the worker provisions.

“I’m calling it an education campaign — to take some of the things they’re talking about and showing how they would work for individual businesses.”

Klingel said the one area where there is general agreement is on so-called wage theft — enforcement of unpaid work hours and overtime. But details in the other proposals have raised concerns. For example, the scheduling draft calls for worker schedules to be posted 28 days ahead of time and any changes would trigger provisions of the plan.

“Scheduling is the lightning rod,” Kingel said. “People say, ‘they don’t understand how business works.’ In some instances they don’t because they’re busy running the city. Our job is to let them know how it works.”

Klingel said the chamber and other groups in the coalition oppose any local minimum wage.

Preemption by the state?
During the 2015 legislative session, bills were introduced in both the House and Senate that would have preempted local ordinances on workplace standards and wages. They are part of a national trend toward heading off more-liberal policies that are emerging from cities and counties in response to a lack of action at state Legislatures. The language in the bills passed the Republican House but did not emerge from House-Senate conference committees and did not pass the Legislature.

Minneapolis elected officials objected to the bills, saying in a letter to House Republican leaders that they violate the “fundamental, bedrock principle of allowing locally elected leader to work with their constituents to make decisions that are right for their communities.”

But the threat of such legislation was cited by Hodges in her blog post as a reason for not going alone on minimum wage.

“In this context, it is unwise to pursue a one-city, go-it-alone strategy, because it would create a target for legislators who are hostile to minimum-wage increases to pass laws to preclude them altogether at the local level.”

Hodges is not as concerned about legislative reaction to the sick leave and scheduling issues — placing both at the center of her agenda for her second year in office.