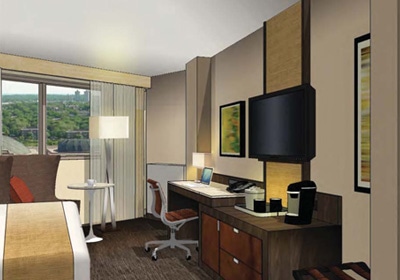 Millennium Hotel Mpls. to Close in Dec. for $20M Renovation

The Nicollet Mall property hopes to transform itself into a luxury hotel that will compete with the Hilton Minneapolis and the Hyatt Regency Minneapolis—and that will attract more corporate travelers during the work week.
September 14, 2012

Millennium Hotel Minneapolis is about to undergo a $20 million renovation that will upgrade its guest and meeting rooms and add a new restaurant and lounge.

The hotel—located at 1313 Nicollet Mall—will close from December 11 through March 31. When it reopens on April 1, just before its 50th anniversary, renovation will be finished on 163 of its 321 guest rooms and 90 percent of its 22,000 square feet of meeting and public space. Construction on the remaining hotel rooms and meeting space will be completed by mid-June. Shortly thereafter, the hotel’s porte-cochÃ¨re—the protruding structure at the front entrance that guests drive under—will receive a facelift, and the name “Millennium” will be more prominently displayed.

Jenny Stimler, Millennium Hotel Minneapolis’ director of sales and marketing, told Twin Cities Business on Tuesday that the renovation will turn the 49-year-old building into a “luxury” hotel. Each guest room is being completely gutted and the restrooms are being redone, she said. In addition to an updated look, each room will feature a plasma television, high-speed Internet, a “jack pack” system that contains outlets for various electronic devices, a mini refrigerator, and a laptop safe.

As part of the renovation, the hotel’s current restaurant, Nic’s on Nicollet, and its bar, Martini, will be replaced with a new yet-to-be-determined restaurant and bar. The building’s heating and cooling system is also being replaced, and that’s ultimately what necessitated the temporary closure, Stimler said.

Minneapolis-based RSP Architects is handling the redesign, and Stimler said that the hotel is now accepting requests for proposals for the project’s general contractor.

According to Stimler, the hotel’s primary competitors at this time are the Crowne Plaza Minneapolis—Northstar Downtown, the Hilton Garden Inn Minneapolis Downtown, and the Radisson Plaza Hotel Minneapolis. But she expects the renovation to elevate the hotel to a category that includes the Hilton Minneapolis, Minnesota’s largest hotel based on guest rooms (of which there are 821), and the Hyatt Regency Minneapolis (which recently completed its own, $25 million renovation).

Millennium Hotel Minneapolis, whose year-to-date occupancy rate is 62 percent, is also looking to grow that figure “quite a bit,” Stimler said.

Another major goal following the renovation is to attract more corporate business travelers. Stimler said that the hotel is now mostly a weekend destination, and many Twins, Vikings, and Gophers game attendees stay there after weekend games. But the hotel sees a key opportunity to grow its weekday occupancy.

In 2011, 54 percent of Millennium Hotel Minneapolis guests were in what Stimler refers to as the “transient” category—a designation that comprises last-minute leisure travelers who stay on weekends and business travelers who stay during the work week; meanwhile, 46 percent were part of corporate, convention, and association groups that booked blocks of at least 10 rooms. In the near term, the hotel wants to shift that mix to 49 percent transient and 51 percent group.

Stimler said that the hotel’s rate structure will be “completely changed” following the renovation. Rooms now start out at about $129, and Stimler said current prices will increase by an average of $30.

The hotel’s last major update occurred in 2000, although the lower level—including the meeting space—was also renovated in 2007. This renovation is hoped to help Millennium Hotel Minneapolis thrive in an increasingly competitive local hotel market—one in which a large number of brands in a relatively small vicinity are working to woo the same customer base.

“In general, this entire year, hotels have been more competitive than ever before when it comes to rates and opportunities,” Stimler said. “There are so many hotels in the Minneapolis market.”

Millennium Hotels and Resorts is based in Singapore. Among the more than 100 hotels in its portfolio, the Minneapolis hotel is the only one located in a building that it leases rather than owns—and in 2000, it signed a 30-year lease for the property. Millennium is covering the full, $20 million project cost.

Millennium Hotel Minneapolis is currently a three-star hotel, based on AAA’s rating system—the one that the hotel monitors—and Stimler said the goal is to boost it to a “higher-end” three-star property, although AAA won’t update the rating until after the renovation has been completed.