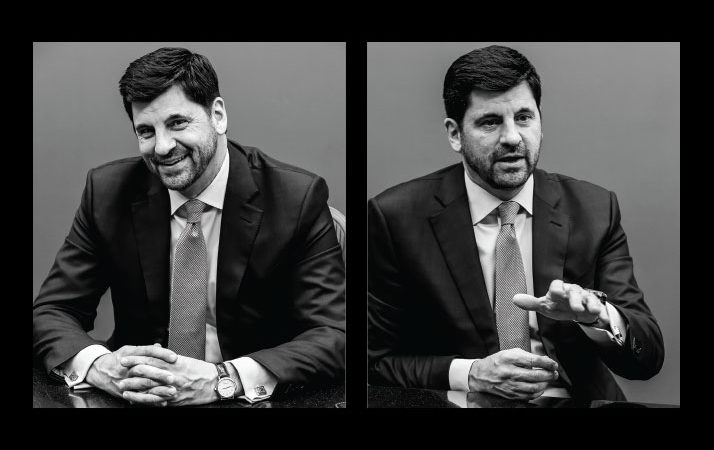 The former leader of Blue Cross and Blue Shield of Minnesota discusses diversification and the future.
By Burl Gilyard
April 20, 2018

Michael Guyette did not run a Minnesota-based Fortune 500 company, but he did lead a business on that scale. He served as president and CEO of Eagan-based nonprofit Blue Cross and Blue Shield of Minnesota, the state’s largest health insurer, for five years.

Guyette brought deep industry experience to Minnesota. Before joining BCBS of Minnesota in 2013, he was president of national accounts for Connecticut-based Aetna Inc., one of the nation’s largest for-profit insurers. He also worked at Blue Cross and Blue Shield of Florida for eight years. In 2010, Guyette served as chairman of the Consortium of Health Plans, a coalition of 21 Blue Cross and Blue Shield plans across the U.S. For 2017, BCBS of Minnesota had revenue of $12.5 billion and a net profit of $148.3 million; including a $52 million profit for individual health plans after years of losses.

In mid-February, Guyette stepped down to become CEO for California-based VSP Global, which focuses on vision-related coverage, products and services. He will also leave the board of Eagan-based Prime Therapeutics, a for-profit pharmacy benefit manager owned in part by BCBS. BCBS also owns Further, a health savings plan administrator.

Twin Cities Business sat down with Guyette before he announced his departure. His comments remain relevant, speaking to the big-picture business landscape of health care.

TCB: How concerned are you about for-profit competitors entering the Minnesota health insurance market?
MG: We’ve been competing against some of the nationals for quite a while. They’ve already been in this marketplace for national account business and some of the Medicare business as well. Minnesota is a very attractive marketplace, but I believe Blue Cross Blue Shield of Minnesota is prepared and will continue to prepare for additional competition. What’s important to note, though, is they are most likely not going to play in the individual [health plan] market. I think the original intent to allow for-profits to come into the marketplace was to get additional competition in the individual marketplace. And as far as I know, none of them are entering the individual market.

Q What do deals like the proposed CVS/Aetna merger mean for the industry?
What you’re seeing there is a convergence of retail, pharmacy and health insurers coming together into one entity. In this marketplace we’re sitting here with [customer service centers] and our partnership with our [pharmacy benefit manager] Prime Therapeutics, which is also Minnesota-based, [which] sets us up to compete with some of the changes that may be happening in the environment.

Q Why create those storefront customer service centers (in Edina, Roseville and Duluth)?
It really puts local presence into the community that we serve. It gives people access to us in a way they didn’t have access to us before. Now they can walk in and talk to somebody. The main reason people go in is to get additional service. They may have questions about claims, questions about coverage. It’s [also] a community access point for some of the nonprofits. We invite the community in. We have a community room in all three of the stores.

Q How many for-profit subsidiaries do you have?
We have two wholly owned ones right now. One is called Further, and it’s a health savings account administrator, so it’s really a financial services arm. It’s been growing significantly; [it] just added another Blue Cross and Blue Shield plan called CareFirst, which serves the Maryland, northern Virginia and [Washington] D.C. area. Select Account has been doing a great job of expanding nationally.

The other one that we have is called ClearStone Solutions. ClearStone offers Medicare Part D [prescription drug] coverage, not just in Minnesota but also in the Midwest. We just added Michigan and North Carolina. They’re continuing to grow as well. They partner with other Blue Cross plans.

Q How long have these businesses been up and running?
They’ve been here before I came on board. We have focused on diversification as a strategy to help provide stability to our health plan. We do have part ownership in Prime Therapeutics and then we have part ownership in a company called Availity, which is a national claims transaction clearinghouse. The other owners of those entities are Blue plans.

Q Prime Therapeutics seems to be growing fast.
They’re growing significantly. Jim DuCharme is the current CEO and is doing a fantastic job growing that company. We recently created a joint venture with Walgreens Boots Alliance around mail-order and specialty drugs, [which has] been driving costs down for the plans. We recently picked up the specialty drugs [business] for the federal employee program, which covers federal employee workers throughout the country. They just added another Blue Cross group of states to their customer list including Oregon, Utah, Idaho and Washington state.

Q Is expansion out of state a conscious business strategy?
Very conscious, yeah. We actually renamed our holding company—our parent company—Stella to make it more consumer-facing, consumer-oriented, and to give us a national view; because with the Blue Cross and Blue Shield of Minnesota name we are confined on the health-plan side here in Minnesota, but with our other companies we can go outside of Minnesota.

Q Do you have any other investments?
Another company we just invested in is a company called Livio Health Group. Livio is a local company that we invested in that delivers health services to the underserved. We show up at homeless shelters and we help the Medicaid population, getting them services that, frankly, they would [otherwise] go to the emergency room for. We do these pop-up clinics that really have a positive impact on people, where they’re getting access to care in places where they are instead of them having to hop in an ambulance and off to the ER.

Another one that we’re invested in is a company called Learn to Live. It offers online behavioral health consulting, helps people with anxiety and depression; as a matter of fact, the University of Minnesota has just enrolled their 50,000 students in it.

Q Sounds like a venture capital firm. Do you have an investment division?
We do. The way we’re structured is we have our holding company at the top and then we have Blue Cross and all the health insurance on one side, and then on the other side we have our diversified businesses. We have an innovation incubator in downtown [Minneapolis]. It’s called TreeHouse [Health] and we are one of the anchor partners there. We help support health care startups. These great startup companies will come through, they’re looking for advice, they’re looking for capital, they’re looking for access to our customers or our members to see if they can offer services, and we’re in there helping this innovation lab and this incubator really take off.

Shaping Our Future
Plugged In: May 2018
Lakewinds Food Co-op is Growing Organically with Organics
Employers Should Stop Paying for Health Care's Inefficiency

Q Do you have a fund with a specific amount of money for investments?
For us it’s about not necessarily how much, because then you make bad decisions. If you say, “Put $100 million in the marketplace,” then you start spreading money in the wrong places. We believe we put money in the right places and look for the right companies that are going to help our customers.

Q And your for-profit companies help the overall bottom line?
We are a nonprofit at the very top and will remain nonprofit. We end up with some for-profit entities because capital comes in a variety of ways, and it also gives us an opportunity to grow them and add additional partners. But you’re exactly right. It’s ultimately to serve our mission, which is to make sure that people have quality access to health care throughout the state. And for us to do that, if we have some [for-profit] companies over here that are doing well, we can reduce the burden on the health care side. Again: It’s not just about the money that it makes, but it’s the services that they provide to make health care easier.

Q But your bottom line was hit by individual health plans?
Most of our lines of business are operating very well. Individual has been volatile for the last three years. We felt our mission was to make sure we were able to provide coverage for all Minnesotans, no matter what segment of the population they were in, and unfortunately that meant we took some negative operating income—more than expected—on the individual side. Not unusual—you saw that across the country, for the most part.

Q What big-picture fixes are needed for health care?
We’ve been so focused on the cost of health insurance and the access to health insurance over the last four years. That should have been a one- or two-year discussion; instead, it went on for four years. What we should be focusing on is the cost of care and the delivery of care. In other words, getting people to the right place for the right treatment, the right care that they need.

Q The number of urgent care clinics is growing. Could that be a factor in bringing health care costs down?
I think when you think about how care will be delivered in the future, it’ll be less in hospital beds. People want to have their care delivered at home or they want to have it outpatient. I do think as long as the right care is delivered at the right time and [with] the right services, it could bring costs down.

Q How do you plan for the unknown?
We are constantly doing scenario planning. From our strategic planning perspective, we’ll run through various war-gaming exercises or potential scenarios out there to look at what would happen if different legislative changes happen or if new competitors enter the market or if Amazon enters the market.

Q Are there other players out there? Does Amazon really want to get into the pharmaceutical business?
You always have to look at the non-traditional players, whether it’s Google or Microsoft or Amazon, whether they’re looking to exchange data or provide services or product. I think everybody is looking constantly at the non-traditional moves. Even the Amazon potential of getting into pharmacy—what are they talking about? The actual product or the distribution? It’s going to have an effect; maybe it’s [on] pharmacies themselves, or will it actually have an effect on pharmaceutical manufacturers? Or insurers? Nothing’s safe right now as far as non-traditional [competition].

Here’s where I’d say Minnesotans think they’re great and they’re not: There are health care disparities in this state that continue to grow and widen. Just because an average says we have good health in this state does not mean we have good health in North Minneapolis or in parts of Mankato or parts of Bemidji. We have socio-economic issues, we have social determinants of health that are impacting the underserved and, frankly, the minority populations in this state.

So if you’re a Caucasian you might have really good health, but if you are a minority and living in some of those neighborhoods you may not have good access to food, you may not have good access to neighborhoods that the kids can play in or exercise in. That’s widening even further and further, and to me that should be of great concern to all Minnesotans and we all need to work together to figure that out.

Q What did you learn from your industry mentors?
If you focus on doing the right things for the right reasons, everything else follows to the benefit of the company, the community, the employees and even your own career. It really matters.