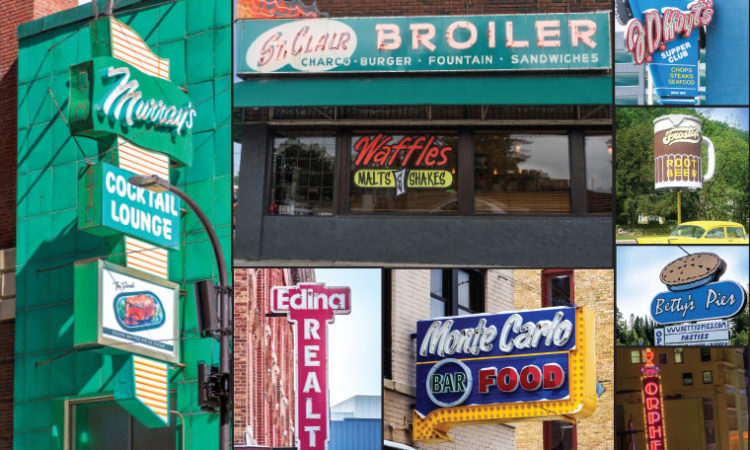 Iconic Signs That Are No More

Arby’s hat and the Broiler’s flames fell this winter.
By Amanda Ostuni
May 01, 2018

At its core, a business sign is just a marker, telling people which parking lot to turn into, which door to enter.

But they can also be works of art and “an important part of a built environment,” says Aaron Hanauer, Minneapolis senior city planner. They create a sense of place and become waypoints that signify a street or neighborhood. The ones that endure can eventually eclipse the businesses they herald.

Less than a month apart this winter, iconic neon signage from St. Paul’s St. Clair Broiler—which closed last year—and the neon cowboy hat for the recently closed Arby’s in Uptown Minneapolis were removed. Both losses were lamented on social media, and thousands even showed up to a rather ironic candlelight vigil at the Arby’s site.

In some cases, signs are protected from removal. Minneapolis’ Grain Belt Beer sign and the Town Talk Diner are listed for preservation by federal and city statute, respectively.

Some are not so lucky, and their significance only becomes apparent when they’re gone.

“When you drive to work, you don’t necessarily think about what you see, but the brain is using all these landmarks—and business signs become part of it,” says David Lanegran, professor emeritus of urban, human and geographic education at Macalester College. “People are mourning their loss of a sense of a place.”

Hanauer says Minneapolis has never designated a sign for preservation (versus the entire building), but it is within its authority. Former Mayor Betsy Hodges asked on Twitter whether anyone made an application for the Arby’s sign, but Hanauer says nothing was set in motion in time.

At press time TCB was still waiting for comment from representatives of the Broiler and Arby’s on their signs’ fate.

Plugged In: May 2018
Lakewinds Food Co-op is Growing Organically with Organics
What the New Tax Order Really Means
Michael Guyette Looks at the Big-Picture Business Landscape of Health Care

The Minnesota Historical Society did not pursue the Broiler sign (and had no interest in the Arby’s sign, of which there are still dozens around the country), though it has acquired signs from Tiger Jack’s Shack and Dayton’s Oak Grill restaurant, among others, says Adam Scher, senior curator. The organization keeps the signs in environmentally controlled storage areas with safe levels of illumination. In some cases, they do restoration work and use them in exhibitions. The collection includes signs from restaurants, clothing stores, movie theaters, a stained-glass studio and more.

“It’s a way of being able to interpret the history of the business itself,” explains Scher. “If these businesses were in a particular location for an extended period of time, they became a landmark. Signs are a part of the environment. It’s important to preserve them.”