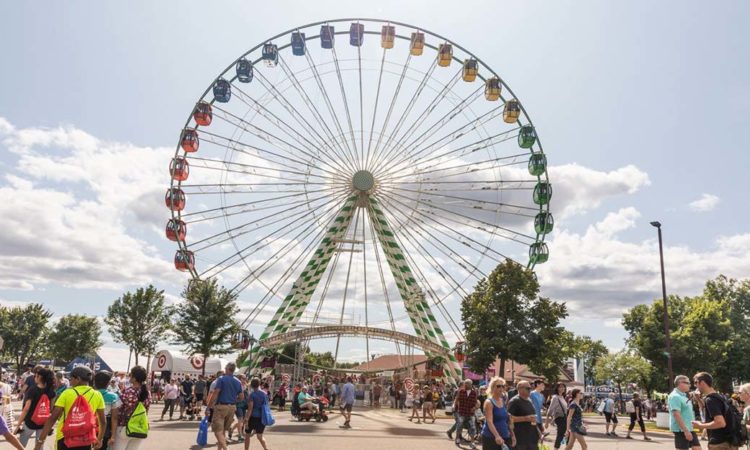 The fair has increased the price of admission six times over the last decade. Photo by Caitlin Abrams for Mpls.St.Paul Magazine

The Minnesota State Fair has operated at a loss before, but leaders say this time is much different. Here’s why the cost of admission is going up this year.
By Dan Niepow
January 19, 2022

Nothing gets Minnesotans quite as worked up as an increase in state fair ticket prices. On Monday, nearly every media outlet in the state – and a few in neighboring states – quickly shared the news that the Minnesota State Fair will bump up the cost of admission by $1 this year.

When Minnesotans gather at the fair this summer, the price of a regular adult ticket at the gate will be $17, up from $16 in 2021. It’s the sixth time the fair has increased the price of admission over the last decade. The last time ticket prices increased was in 2019.

How do fair leaders decide when it’s time to bump up the cost to enter? Many of the news articles – and the fair’s own news release about the increase – cited a crushing $16.5 million operating loss in 2020, followed by another $1.3 million loss in 2021. But the actual calculus is, of course, a bit more complicated than that. In some years, the fair has hiked admission costs even after turning a profit, such as in 2019, 2017, and 2011. What gives?

Note: 2021 financial figures are unaudited
Jerry Hammer, executive VP and general manager of the fair, says that the fair’s own cost per visitor is one of the key factors in determining ticket prices. The fair first tallies all its own costs operating and maintaining the fair – providing security, entertainment, educational programming, sanitation, and sundry other things. Then, the organization weighs those costs against the revenue it earns from patrons’ tickets.

“In a good year, the cost per visitor to the fair exceeds the ticket price by $3 or $4,” Hammer says. “Last year, with attendance down, it was over $10. … We subsidize your ticket through other forms of revenue, which is percentages on food sales, sponsorship fees, commercial exhibit space rentals, and that kind of thing.”

Hammer says that gate ticket sales are generally between 30 percent to 40 percent of overall revenue each year. All the other sources of revenue are percentages of sales to other businesses, like food vendors. The fair takes a 15 percent cut from food sales, and an 18.5 percent cut from alcohol sales. Those figures, Hammer points out, are well below the percentage of sales taken by other venues like baseball parks.

No fair, no costs, right? Not exactly

The Minnesota State Agricultural Society, a nonprofit state-established entity, runs the fair each year. For all intents and purposes, the society and the fair are essentially “one and the same,” Hammer says. The state ag society is composed of representatives from 87 county fairs in the state, along with 44 additional reps from statewide farming organizations. Since it’s a state entity, the society is required to file a report detailing the fair’s financial results every year.

Though it’s technically owned by the public, the fair is financially self-sufficient, so it operates without financial support from the state. The organization does collect donations via its nonprofit arm, the Minnesota State Fair Foundation, which was established in 2002. But much of its revenue comes from ticket sales.

2020 was an unusual year for the Minnesota State Fair, as it was for virtually every other organization on the planet. The fair’s leaders called off the event in May of 2020, just a couple months into the Covid-19 pandemic. One might rationally conclude that, without a fair, the organization’s overall expenses should have been way down. And they were: In typical years, the fair’s expenses usually range somewhere between $30 million and $50 million. In 2020, the fair had just shy of $20 million in expenses, according to the fair’s 2020 report.

So what exactly did the fair pay for during the off year? Infrastructure maintenance was one of the bigger-ticket items. Per the fair’s 2020 financial report:

In other words, the organization’s costs didn’t go away simply because the fair was off, just as restaurants and bars still had to grapple with rent and other costs during government-mandated shutdowns in the early days of the pandemic. There’s always maintenance to the fair’s 25 buildings, some of which are more than a century old. The fair also needs to maintain its over 300 acres of fairgrounds. “Most stadiums have short shelf lives,” Hammer says. “We keep ours. We renovated the Grandstand almost 20 years ago. That was originally built in 1909.”

Up until the Covid-19 pandemic struck in March 2020, the fair had been proceeding with business as usual, tidying up its aging infrastructure and preparing for a typical year of festivities. “We were proceeding with capital work and all the usual stuff until March of 2020, so we had almost half a fiscal year in before everything blew up. We incurred a lot of expenses that we normally would,” Hammer says. The fair’s fiscal year starts and ends Oct. 31.

Then there’s the cost of employing a full-time year-round staff of about 80 people. Hammer says that the fair’s leaders made a commitment to keep the team in place even during shutdowns. “We made it a priority, back in May of 2020, to keep our operation intact and keep our staff together,” he says. “Nobody teaches ‘State Fair’ anywhere; you need to do the work for multiple years. That’s why it was so critical to keep our operation intact.”

On top of all that, revenue didn’t increase proportionally during the off year. In 2020, the fair reported just $3.4 million in revenue, partially through its two ticketed food parades. The prior year, the fair’s revenue was over $63.2 million.

As a nonprofit entity, the fair has, of course, operated at a loss before. In 2013, for instance, the fair logged a $1.4 million loss. Ticket prices increased a dollar in the following year. “Nonprofits operate a loss sometimes just like any business, but they would need some sort of plan to dig out of negative cash flow,” noted Sarah Lutman, TCB’s nonprofit columnist, in an email.

The Minnesota State Fair essentially functions much like a private business, though it’s not necessarily chasing higher profit each year. In its yearly financial filings with the state, the fair reports its “net position,” which is a compilation of all of the fair’s assets, revenue, and liabilities. The organization also reports its “change in net position” each year, which is what a private business would most likely term net income, or net loss.

Over the last decade, the fair’s net position has actually trended upward, growing from $40.6 million in 2010 to more than $68 million in 2019, though it took a dive the following year. The organization’s 2020 loss stands out among all other years to date.

“There’s been nothing like this in the history of the fair,” says Hammer, the fair’s general manager for over two decades. “It’s a $60 million operation whose purpose is bringing people together. When you can’t do that, you’re in a world of hurt.”