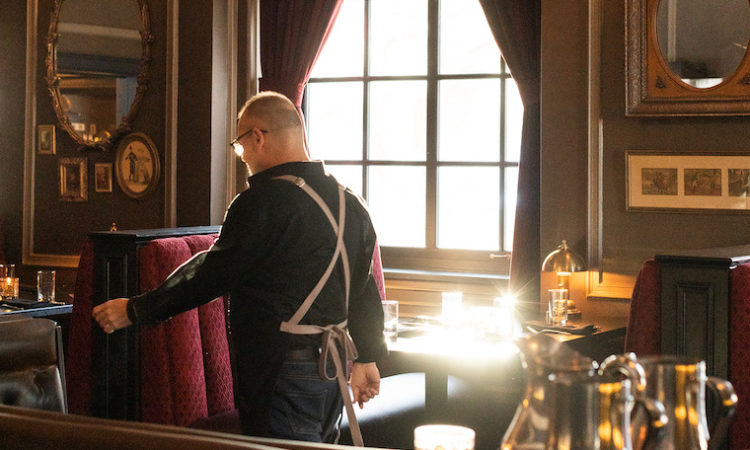 Following Gov. Tim Walz’s order to close bars and restaurants, hundreds of thousands of service industry employees will be temporarily out of work.
By Dan Niepow
March 16, 2020

As Minnesota temporarily shuts down bars, restaurants, museums, and other public gathering places in the face of the global COVID-19 outbreak, the state is preparing for the largest request for unemployment insurance benefits in its history, Gov. Tim Walz said at a Monday evening press conference.

“It will certainly be the greatest one-day influx we have ever attempted to process,” he said.

The state doesn’t have firm projections on the number of people who will apply for unemployment pay, but it’s likely in the range of hundreds of thousands, state officials said. Hospitality Minnesota, a trade group for the industry, estimates that the hospitality industry employs more than 300,000 people in the state.

“Hospitality … is a critical driver of our state economy and identity and will require significant additional economic relief as a result of this pandemic,” said Hospitality Minnesota president and CEO Liz Rammer in a statement issued after Monday’s press conference.

As part of Walz’s executive order issued Monday, all places of “public accommodation and amusement” such as bars, movie theaters, and gyms will need to close up shop by 5 p.m. Tuesday. They’re required to remain closed through March 27. The news comes as the number of COVID-19 cases in Minnesota grows to 54. Most of the cases stem from international travel, though state officials have seen evidence for some community spread. Across the ocean, cases have been skyrocketing in Italy and Iran. Italy has now recorded more than 1,800 deaths due to COVID-19.

Minnesota’s unemployment insurance program pays half of a worker’s regular pay, up to $740 a week, said Steve Grove, commissioner of the Minnesota Department of Employment and Economic Development.

Under existing Minnesota law, workers don’t qualify for unemployment benefits until they’ve had a week with no pay. The governor’s order eliminates that waiting period, enabling furloughed workers to start receiving benefits immediately.

Grove said that some employees may decide to tap into their existing paid time off first.

“We know that … some people have paid leave available to them,” Grove noted. “Those programs will probably pay you more than unemployment insurance.”

As for how long the state-mandated closures will last? Walz indicated that it will almost certainly extend beyond March 27.

“This is the beginning of it,” Walz said. “This is to set the parameters, if you will. … Most of us understand there will probably be a further extension.”

Future executive orders could extend beyond bars, restaurants, and gyms, too. That could one day include malls, which, as of Monday evening, hadn’t yet shut their doors.

The restaurant and hospitality industries, meanwhile, face a grim prognosis in the interim. Minnesota chef and restaurateur Andrew Zimmern, who spoke at Monday’s press conference, said many restaurants may not be able to survive the shutdown.

“We need to make sure that when this pandemic is finally over — and it will be over — that we have restaurants that can reopen,” he said. “The harsh reality is that most won’t.”