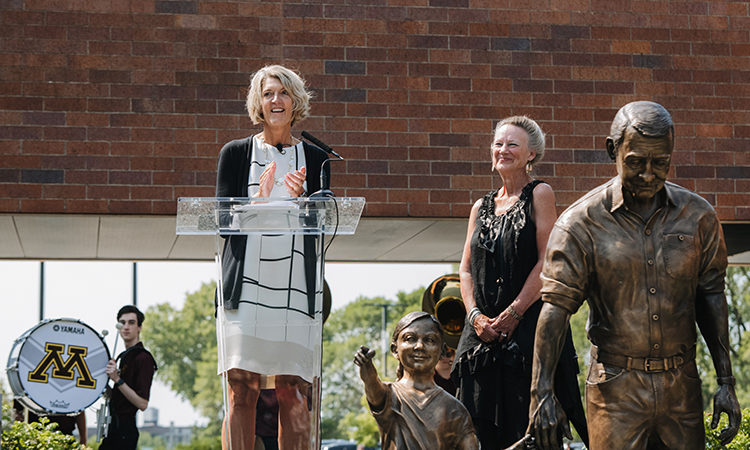 The cooperative celebrates its anniversary by boosting profits and dedicating a farm family sculpture depicting its roots and culture.
By Liz Fedor
August 04, 2021

Land O’Lakes ushered in its second century of operations Wednesday by dedicating a bronze sculpture on its Arden Hills campus and reporting that it doubled profitability for the first half of 2021.

About 20 members of the University of Minnesota marching band were on hand for the celebration Wednesday morning when Land O’Lakes president and CEO Beth Ford unveiled the statue that was commissioned to mark the cooperative’s 100th anniversary.

Joining Ford was Hopkins-based artist Deb Zeller, who created the sculpture, called “Rooted in Tomorrow,” that depicts a grandfather walking hand in hand on a farm with his grandchild.

Zeller drew on her own farm roots for inspiration. She is the daughter and granddaughter of Land O’Lakes dairy farmer members. Her family’s 120-acre dairy farm was south of Hutchinson, Minn., in McLeod County.

“In farming, we say we manage so the next generations can thrive,” Zeller said in an article on the cooperative’s website. “I see this work telling that story — the little girl is leading the family farm into the future, encouraged by the strength and character of those who raised her there.”

After humble beginnings as the Minnesota Cooperative Creameries Association in 1921, the Land O’Lakes of today ranks No. 219 on the Fortune 500 list and achieved $14 billion in total sales in 2020.

Results released Wednesday show that the cooperative is on firm financial ground during the second year of the Covid-19 pandemic.

For the first half of the year, the cooperative’s net earnings doubled to $236 million. That income was attained from net sales that totaled $8 billion, which increased 9 percent over the 2020 period.

Ford emphasized that Land O’Lakes customers and employees were able to “maintain the strength and accelerate the momentum” of 2020, when the company adapted to marketplace disruptions caused by the pandemic.

“Despite increasing costs, the fundamentals of our industry remain favorable, and our differentiated approach has delivered sustained performance in all business segments through the first half of the year,” Ford said in a Land O’Lakes news release. “We also recognize third quarter could be our toughest year-over-year comparison in our historically smallest quarter, as during 2020, Covid-19 drove above normal retail purchasing.”

A good portion of net sales growth was attributed to the crop inputs and animal nutrition business units. In addition, Land O’Lakes said it used “higher pricing across the portfolio to offset rising input and supply chain costs.”

During the spring and early summer period, Land O’Lakes also saw sales accelerate as farmers spent money on their crops and animals.

“Dairy foods earnings were below the elevated levels experienced in the second quarter of 2020, as consumers increased retail purchases at the start of the pandemic, but overall performance in retail dairy remained solid,” Land O’Lakes said in a release Wednesday. “Dairy also benefitted from strong performance in food service as restaurants and other institutions continued to reopen across the country.”