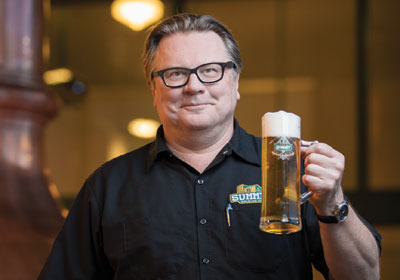 No, Mark Stutrud didn’t envision a brewery with the capacity to produce 240,000 barrels of beer when he started making Summit Extra Pale Ale in a storefront facility on St. Paul’s University Avenue in 1986. Back then, the very idea of making a beer that bore little resemblance to Stroh’s and Schmidt’s, both made in St. Paul back then, was sufficient to qualify as wishful thinking.

“I was preoccupied with survival,” Stutrud recalls. “There wasn’t time to fantasize.” In 1986, “there was no reference point for what we were doing,” the North Dakota native says. “We were sodbusters.”

Back then, craft beers were predominantly the domain of West Coast brewers, who arose from that region’s production of fine wine. In the Midwest, “there wasn’t a lot of craft brewing,” notes Paul Gatza, director of the Brewers Association, an industry trade association based in Boulder, Colorado. “In a lot of ways, [Summit] was a pioneer in an area where there’s a great brewing heritage.”

These days, of course, Minnesota is drenched in craft beer, with a new brewery or brewpub seeming to open every month. But Stutrud was the grandfather of this new wave of high-end suds. Summit’s longevity is founded in large part by its solid investment backing, and many of those investors remain. Stutrud also evangelized tirelessly to restaurants, bars, stores, and distributors to try his beer and then carry it. “We have three sets of customers that we have to nurture,” he says: drinkers, distributors, and retail outlets. Perhaps most important, he sought to produce beer that was not only distinctive but well-made.

“People will say, ‘Oh yeah, Summit, they’re really traditional and consistent,’” Stutrud says. “And we say, ‘Well, thanks for noticing.’ Because we’ve been busting our butt for 26 years doing exactly that. Because it’s really damned hard to do.”

His brewery is now considered a major regional operation, but Stutrud still projects a good-natured, down-to-earth camaraderie. Summit has built a large portfolio of craft beer products, all deeper and richer in flavor than the pale, watery coldies that dominate the market. But Stutrud is no snob; he loathes the snarkiness and in-crowd cool prevalent among beer geeks.

“At the end of the day, beer is a beverage for everybody,” Stutrud says. Currently, craft beer occupies about 6 percent of the U.S. beer market; but it’s the only beer category that has been growing in recent years. “We haven’t reached a tipping point yet,” he says. “Fifteen percent of total consumption is very reasonable.”

Meeting that goal would require wooing drinkers from the massive triumvirate of Budweiser, Miller, and Coors. Stutrud doesn’t see brewers of light American lagers as enemies. “It’s easy for a little guy to say, ‘Don’t buy that yellow swill,’ ” Stutrud says. “But those folks [at Schmidt and Stroh] helped us. When we had a [quality-testing] laboratory the size of a Victorian closet, we were able to take samples of our beer to their labs to do analysis.”

That said, he notes, “Our growth is based on effectively competing with the big boys.” Summit “isn’t going to grow simply by commanding a larger presence within [craft beer’s] 6 percent segment of beer sales,” Stutrud says. “Eighty percent of the country’s beer drinkers are still drinking light American lagers. That’s the stark reality. But it’s also an opportunity.”

It’s an opportunity Stutrud is positioning Summit to more firmly grasp. In 1998, the brewer moved into its shiny new facility just a few miles down West Seventh Street from the once mighty, now shuttered Schmidt plant. The new brewery gave Summit the opportunity to brew 60,000 barrels annually. At the time, the space seemed enormous. It doesn’t now: The plant now produces 120,000 barrels a year. And with demand continuing to bubble—Summit has averaged 10 percent annual growth since it opened—the company’s bursting at its concrete seams. Noting that his company has been rapidly paying down its mortgage, “I guess it’s time to step up and go into debt again,” Stutrud says with a hearty laugh.

In mid-November, Summit broke ground on a 7,600-square-foot addition that will double its current capacity. When completed in June, the new space will house 12 new brewing tanks, each of which will be twice the volume of the brewery’s existing 24 tanks. There also be room for 12 more tanks, if needed—which would give Summit the capability of brewing 360,000 barrels annually.

Stutrud is loath to take most of the credit for this growth. “Truly, this place is a testament to our customers,” he says. “They’re the folks who built this joint.”