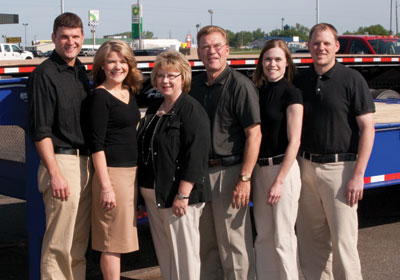 Felling Trailers, Inc. makes trailers designed to move equipment, so it’s not surprising that it was hit hard by 2009’s sharp downturn in the construction industry. As the recession began, the Sauk Centre company had about 100 employees and brought in around $16 million in annual revenue, selling approximately 2,500 trailers every year. Until the recession, Felling Trailers had enjoyed continuous sales growth since CEO Merle Felling started the company in 1974.

“The construction downturn was very tough for us,” says Brenda Jennissen, the company’s vice president of public relations and finance. The firm’s saving grace, she says, was that it was “a little more diversified” than its competitors, with some trailers going to rentals, the agricultural industry, and utilities.

Rogers-based Scharber & Sons has been one source of diversified sales for Felling. Scharber sells trailers to farmers, contractors, and government agencies that want to haul lawn equipment, skid-steer loaders, and small excavators.

“We started selling their trailers in the mid-1980s, and it’s been a happy relationship,” the company’s Mark Scharber says. “They sell a good product and they stand behind it. It’s fun to sell their trailers. They’re not the cheapest trailer on the block but the repeat business is good.”

Figuring that non- construction and custom business could help the company stay afloat, Felling assumed that the economy would recover and set about getting ready to profit from that recovery.

“We wanted to go out and get the business and be ready for the turnaround,” says Patrick Jennissen, Felling’s vice president of sales and marketing. (Brenda and Patrick Jennissen are Merle Felling’s daughter and son-in-law. Another daughter, Bonnie, and her husband, Paul Radjenovich, also work for Felling Trailers, as vice presidents of human resources and operations, respectively; two other Felling children, both sons, are not involved with the company. Merle Felling’s wife, Kathy, is a company vice president.)

The company began by hiring three key salespeople as well as some skilled tradesmen and engineers. To pay their salaries, Felling sold three trucks and “a bunch of forklifts,” Merle Felling says. “My thinking for years is that you can always buy machinery, but hiring good people is always a challenge. We saw some good people who were getting laid off from other companies and saw a chance in that.”

The firm diversified its offerings, adding more and larger commercial semitrailers. “That’s a market we competed in a few years ago, but now we’ve gotten more serious in those markets,” Brenda Jennissen says. Felling built perhaps 35 or 40 semitrailers in 2009 and about 100 to 150 in 2012. “That’s a real growth segment for us,” she adds. On top of the standard line, Felling has also emphasized its customized offerings. “Someone might need a semitrailer to haul a 30-foot television screen, or a trailer to haul amusement park rides. A guy who needs a custom product is always going to need it,” Patrick Jennissen says. Custom business helped sustain Felling through 2009. “It’s maybe 5 percent of the business, but it’s growing,” Patrick Jennissen says. Construction is coming back, he adds, and the company is in a strong position. “We’ve lost some competitors, plus some aren’t in a position to respond to demand,” he explains. With 18 months to build, demand is strong, and Felling now has a sales backlog of six months. To help keep up, in July the company opened a new facility in Litchfield.

“We have a large issue finding qualified welders, machinists, and other skilled people in the trades,” Patrick Jennissen says. “We currently can’t hire enough; other firms that use welders and machinists were having the same problem. We had to come up with some way to hire these people if we want to keep growing. That meant finding a market at least an hour away with a big enough labor pool.

“Litchfield is three times larger than Sauk Centre and has a longstanding tradition of good machinists and welders. There’s lots of agriculture, construction, and manufacturing in that area, plus Bobcat has a facility there but retracted back to Bismarck [North Dakota],” he says, leaving desirable hires looking for work.

Litchfield’s real estate market also had the kind of space that Felling needs. Including its new Litchfield facility, the firm now operates about 200,000 total square feet of manufacturing space.