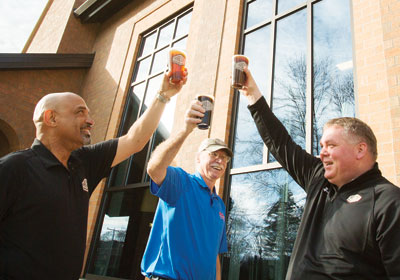 During nearly a century and half in business in the small city near St. Cloud whose name it bears, Cold Spring Brewing Company has seen plenty of ups and downs. It’s now enjoying a strong upswing, thanks to its recent foray into craft brewing.

In terms of production, Cold Spring is one of Minnesota’s largest breweries—the company projected production of more than 100,000 barrels in 2012, which puts it not far behind the state’s biggest brewers, Summit and August Schell. Most of what it brews, however, is contract production for other beverage firms. Its own brands make up about one-quarter of its total production. In the past few years it also has seen a growing business in nonalcoholic beverages, including energy drinks and sparkling juices.

A few years ago, Cold Spring saw a new opportunity—craft beer, the one beer category that has seen real growth in the past few years. But to succeed, the company had to position itself to succeed.

A previous effort to strengthen the company was its reintroduction several years back of an old name in Minnesota brewing, Gluek. It wasn’t a success. In the words of Doug DeGeest, vice president and general manager, Gluek’s beer “was mediocre at best,” often tasting grainy and sour. Operating with ancient equipment in dire need of an upgrade, DeGeest and his team approached owner John Lenore to make their case for investing in a new brewing plant.

Cold Spring also decided that it needed to create an entirely new brand, one with no connection to Gluek’s or even its long-time eponymous brand. The Cold Spring brand suffered from a bad reputation and has all but disappeared in Minnesota, though it still sells in big cities on both coasts. Cold Spring decided to give the new operation its own brand—Third Street Brewhouse, named after a street that formerly ran through its property. In 2011, Cold Spring tore down an administration building to make way for the 18,000-square-foot brewhouse facility and stocked it with top-of-the-line equipment. DeGeest also recruited as his director of brewing Horace Cunningham, a former brewmaster at Summit.

Third Street started making its three initial beers this summer—a cream ale, a brown ale, and a black India pale ale (IPA), as well as a 75-barrel batch of a seasonal autumn ale. (Other seasonals will be produced.) So far, the results have exceeded Cold Spring’s projections. “We’ve sold more beer in four months and with better margins than we’ve ever done before in the past 12 years,” DeGeest says.

Since July, Cold Spring has sold more than 25,000 cases of Third Street, well on its way to hitting a goal to sell 100,000 cases in its first year. It helps that Cold Spring improved its existing beers by brewing them with better ingredients and in smaller batches, DeGeest notes.

In addition to its craft beer, part of Third Street’s success comes from building excitement through brewery tours, beer festivals, and bar tastings.

Cold Spring can ask for—and receive—higher price points for Third Street. Gluek’s sold for about $8.99 for a 24-pack, while the new brews sell for roughly $8.99 a six-pack. Third Street beers are on tap in 50 bars in central Minnesota, compared with zero a year ago for Gluek’s and Northern, a lager Cold Spring developed primarily for the Midwestern market when it discontinued Gluek’s in 2010. Thanks to Third Street and the capacity Cold Spring added to make the brand’s beers, DeGeest projects 2013 production to jump to 170,000 barrels.

Third Street has been an easy sell for Bernick’s, a fourth- and fifth-generation distributor based in St. Cloud. Though Bernick’s has worked with Cold Spring for years, it particularly likes partnering with the company on its new beers and exceeding their shared sales goals. “They did it right,” CEO Dean Bernick says. “They built a first-rate facility and they have the latest in technology.”

In the future, Third Street/Cold Spring will reposition its Northern brand as a premium beer; it also will continue to produce contract beer, nonalcoholic drinks, and other beverages.