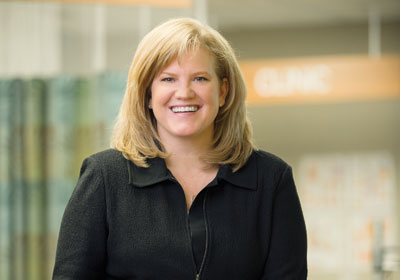 When small towns lose their hospitals, the economic fabric of the community suffers. “The hospital is often the largest employer in a rural community,” says Angie Franks, president and CEO of Healthland, a St. Louis Park–based software provider that helps rural hospitals become fully automated, primarily through electronic health records and billing. “Without the hospital the town dries up and people move away.”

Many rural hospitals today are fighting to remain independent as larger health care firms and hospitals move into rural areas, many hoping to turn these smaller facilities into triage, or feeder, clinics for their urban facilities, a process Healthland is hoping to avert.

“Health care is at the forefront of the national agenda, and automating hospitals is at the forefront of the health care agenda,” Franks says. The American Recovery and Reinvestment Act provides billions of dollars to health care providers to buy and adopt electronic health record technologies, and the Affordable Care Act requires hospitals to provide more integrated care, working across departments in order to improve quality of care and reduce waste. “These two pieces of legislation have put pressure on hospitals to implement technology that helps them provide better and more coordinated care,” she says.

Founded in Glenwood in 1980 by Steve Klick as Dairyland Healthcare Solutions, Healthland was sold to Francisco Partners, a private equity firm in San Francisco, in 2007 and rebranded as Healthland that year. (Klick is no longer associated with the company.) Since then, Healthland has made two strategic acquisitions. In 2008, Healthland purchased Advanced Professional Software (APS), based in Waco, Texas. “APS had a lot of small hospitals [as clients] in a defined geographical area but offered only a financial product solution,” Franks says. The purchase helped Healthland expand geographically and allowed the company to offer its full range of software solutions to APS’ clients.

Healthland made its second acquisition, Omaha-based American HealthNet, in 2009. “That company did what Healthland does, but it had a smaller client footprint,” Franks notes. Along with American HealthNet’s client base, Healthland acquired technology that it has used to build its next-generation product platform.

As Healthland’s senior vice president of sales and market development at the time, Franks was responsible for increasing Healthland’s sales by 65 percent from 2007 to 2009. She was also instrumental in the firm’s rebranding as well as in identifying, selecting, and integrating the acquisitions.

In early 2011, Healthland finished moving its headquarters from Louisville, Kentucky, to St. Louis Park, and Franks, a native of Roseville, took over from interim CEO John Trzeciak, an operating advisor with Francisco Partners.

“This has always been a Minnesota company, but we moved the headquarters back to Minnesota when I became CEO because of access to talent, in both health care and technology,” Franks says. “This is a very well-educated metropolitan area.” The move brought more than 100 high-paying jobs to the local economy. One-third of the firm’s 300 employees office in St. Louis Park, another 100 office in Glenwood, and the remainder are scattered throughout the country in rural communities.

Healthland has already helped 25 percent of the 2,000 rural hospitals with 50 or fewer beds to fully automate. Franks notes that these hospitals see a total of 10 million to 15 million patients a year and provide rural communities with 56,000 jobs.

Healthland’s software helps these facilities automate all of their departments, which allows a person’s medical history to become a single record. “We offer the only system in the country for rural hospitals to coordinate everything into one record,” says Franks. Because these hospitals either have small or nonexistent IT departments, it is critical that the system they choose can be quickly implemented. Franks says her firm can take a rural hospital’s systems from paper to paperless within a year.

Some projects are quicker. “The overall transition took 90 days,” says Robbie Dewberry, CEO of Mitchell County Hospital in Colorado City, Texas. Mitchell County hospital has 25 beds, a clinic, and a 46-bed nursing home. In 2009, the hospital and clinic went from paper to electronic using Healthland’s software, then upgraded in 2011. “We are now 100 percent physician order entry,” says Dewberry, who estimates that each doctor saves 30 minutes a day entering data with the new system.

Since 2008, Healthland has enjoyed a compound annual growth rate of 35 percent. “We will continue to grow and expand,” Franks says. “We have grown every year at a very healthy clip and there is no reason that we will slow down.”