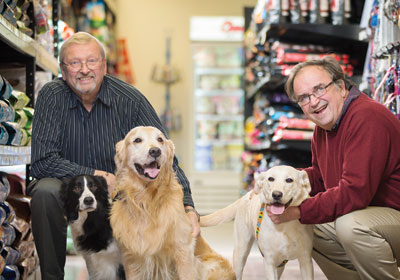 Chuck Anderson and Don Tauer invested $250 in 1990 to start their pet supply store, Chuck & Don’s Pet Food Outlet, building upon many years spent owning a kennel and training dogs. The partners’ original Eagan shop has grown into a chain of 23 stores in Minnesota and Colorado, grounded in their vision to create a place that makes pets and their humans happy.

Anderson and Tauer, along with President and CEO Robert Hartzell, established a community of animal lovers who enjoy shopping where everyone knows their pet’s name. (Tauer retired in 2002.) That means developing well-organized and brightly lit stores—not low-price warehouses—staffed with people who love animals and are given license to spend as much time with customers as they need, answering detailed questions, taking special orders, and pampering customers’ pets.

“We have found that the better experience we can give them—if they come to my store and get everything they want and we treat you right—[they] become a customer for life,” says Anderson of his Mahtomedi-based company. In keeping with the friendly, local feel, Chuck & Don’s stores are “not in the big malls,” Anderson adds. “We’re in their neighborhoods and we can supply them with what they want.”

Hartzell thinks the underlying secret of Chuck & Don’s is its mission to be a premium pet store. The leadership team knew their stores couldn’t compete on price against the larger chains. Instead, Chuck & Don’s concentrates on creating an experience for loyal customers.

Chuck & Don’s works to retain its customers through Friends of Chuck, a loyalty program that awards them with rebates based on their spending in the previous quarter. The company also sends out a quarterly newsletter to customers, the Barkin’ Mews, which comes loaded with articles, coupons, and “animal community” news. More frequent buyers become a “good” or “best friend” of Chuck and get an extra mailer with coupons. “It’s been our position that the best customers get the best deal,” Anderson says. “If you’re going to be a repeat customer, it will be worth your while.”

Through these efforts, Chuck & Don’s expanded from its first store to 18 throughout the Twin Cities. In 2011 and 2012, the company opened five stores in the Denver metro area, aiming to grow its Colorado market to a network of 20 to 30 stores, says Hartzell, an entrepreneur who joined the company in 1996 and bought out Tauer’s portion of the business in 2002. Hartzell attended college in Denver, and family members in Colorado suggested that Chuck & Don’s would fly in the pet-loving community.

Chuck & Don’s weathered the recession nicely, with high double-digit percentage growth each year. Revenue in 2011 was $32 million, and it will hit nearly $40 million in 2012. Part of that success, Anderson says, stems from cultivating customers who understand that high-quality dog food saves them money in the long run because their pets are healthier; regulars also receive rebates and coupons.

“We’re the Starbucks of the industry by providing good-quality products and super service at a good, fair, competitive price,” Hartzell says. “We also have a strong loyalty program where 80 percent of the people who come in the store give us their name and address to become Friends of Chuck’s.”

Rhonda Littlefield, regional sales manager for American Distribution in Cottage Grove, which has been supplying Chuck & Don’s since it opened its doors, praises Chuck & Don’s employees for their knowledge and service, answering their questions about pet care and placing special orders if there’s an item they want that the store doesn’t carry. “I think they found really good locations for customers, their customer service is outstanding, and that’s why they continue to beat the big guys,” she says. “They are really particular about the folks they hire to run those stores, and their stores are just beautiful. They are super-clean and organized and it makes you want to shop there.”

Hartzell and Anderson plan to grow Chuck & Don’s presence in Minnesota and add more stores in Denver to hit a total of 30 locations by 2015. They’re also looking at expanding into other Midwestern cities.