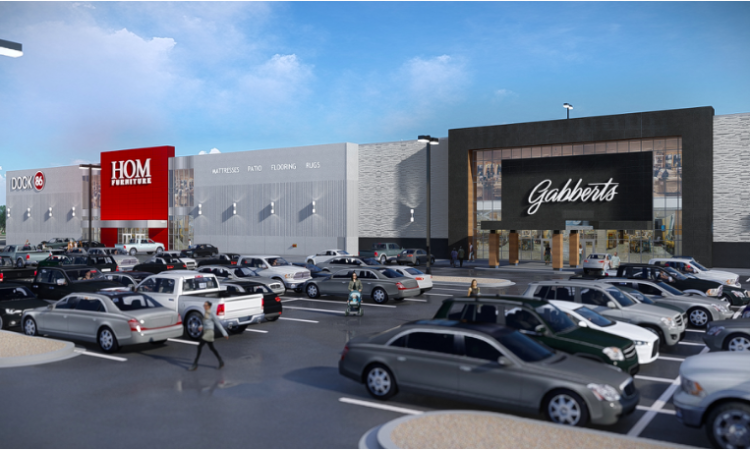 Rendering of the new HOM flagship in Bloomington.

The new flagship store marks end of an era for Galleria as Gabberts moves out.
By Allison Kaplan
May 14, 2020

Not even a pandemic could get in the way of HOM Furniture completing its colossal new flagship on I-494 in Bloomington. The superstore, featuring all of HOM’s brands including Gabberts, Dock 86 and Seasonal Concepts under one roof, will open Friday for by-appointment shopping.

Like some other furniture retailers in town, HOM has been able to ease back into opening its doors even during stay-at-home orders because it sells items deemed essential, including mattresses and furniture. On Thursday, Gov. Tim Walz gave the green light for retailers to reopen on Monday, May 18, with restrictions like a 50 percent occupancy limit.

That limit shouldn’t be a problem for Coon Rapids-based HOM. The new Bloomington flagship, which follows the model established with at HOM’s Little Canada big box store, is the retailer’s biggest store yet at 215,000-square-feet—more than twice the size of the HOM store it replaces. HOM acquired the neighboring spaces that housed Golf Galaxy and Budget Truck Center to make room for the new flagship. The store features two levels with a grand staircase and atrium, a Stickley gallery, a design studio, and bargain shops for each brand.

The opening of the Bloomington store also signals the end of an era for Galleria, where Gabberts was the founding store around which the upscale shopping center was developed 60 years ago by Don Gabbert, as a traffic driver. HOM acquired Gabberts in 2008 as a high end complement to its family of brands.

A planned moving/floor model sale at Gabberts Galleria store was derailed by Covid-19. HOM spokeswoman Wendy Sedlacek said the retailer has not decided whether the store will reopen for a sale when the mall does.

Last year when HOM announced its plans to move Gabberts to Bloomington there was speculation that HOM might try to hold on to the Galleria anchor spot for another concept, per a clause in its longstanding lease with the shopping center. But that’s not happening.

“We will not keep the Gabberts space for another concept,” Sedlacek said Thursday.

What will become of Galleria’s largest, two-level spot is an even bigger question mark now that the Hines-owned shopping center is for sale. Ideas floated for the site have included a hotel or office tower. “We are exploring options for the Gabberts space,” said Mark Clegg, vice president of communications for Hines, which acquired the property in 2012 for $127 million from Gabbert & Beck.