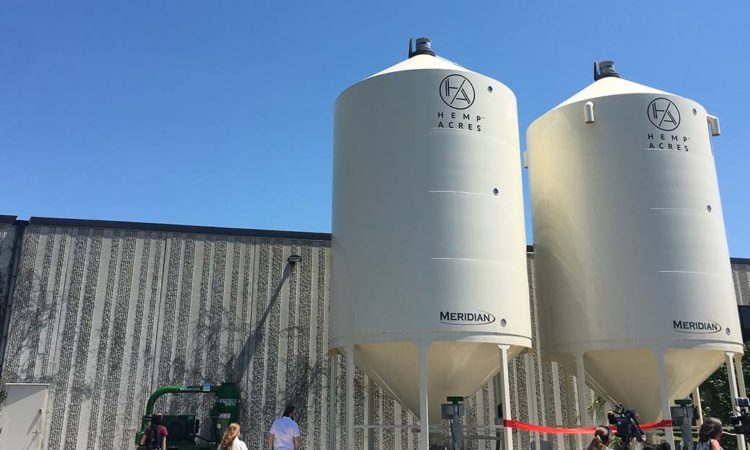 The Minnesota-based hemp company aims to become a national leader with a new 37,000-square-foot facility.
By Dan Niepow
July 19, 2022

Despite all the recent buzz about Minnesota’s new law permitting THC-infused food and beverages, Charlie Levine is thinking about all the other ways hemp can be used.

Levine is the owner of Hemp Acres, a Minnesota-based hemp processor and grower. He was betting big on the hemp industry years before the Minnesota Legislature quietly opened the door for THC edibles. On Monday, Hemp Acres officially opened its new 37,000-square-foot processing facility. The company operates three facilities in total and has specialized equipment to process all components of the hemp plant.

“This has been six years in the making,” Levine told a small group of reporters outside the Waconia facility on Monday afternoon. “A lot of hard work and a lot of investment.”

Levine is anticipating an uptick in demand for food ingredients, which is in part why he’s opened the expanded facility. But he noted that THC edibles are just a small part of his company’s business. Aside from food, hemp can be used to make clothing, cosmetics, and even building materials, among a number of other uses. The stalk of the plant can be processed into a material known as “hempcrete,” which is similar to concrete.

His five-year goal is to process between 30,000 to 50,000 acres of hemp throughout the Midwest. According to data from the Minnesota Department of Agriculture, there were 348 licensed hemp growers in the state last year, as well as 247 licensed processors. Those figures actually represent a decrease over the prior year, but the numbers are sure to grow as more farmers tap into the hemp market.

Gov. Tim Walz, who made an appearance at Hemp Acres’ opening ceremony on Monday, said that hemp opens up “tens of thousands of opportunities.”

“Minnesota’s economy is still foundational around agriculture,” the governor said. “The ability to innovate and the ability to diversify that is more important now than ever.”

In 2016, Levine became the first licensed hemp processor in the state of Minnesota through a pilot program. That was before hemp growing was technically legalized at the federal level. That happened with the 2018 Farm Bill, which legalized growing and processing hemp plants nationwide. Under that legislation, farmers can grow as much hemp as they please, so long as it contains under 0.3 percent of Delta-9 THC, the intoxicating compound in cannabis.

Hemp Acres’ new facility “sends a signal to the market” and positions Minnesota as a leader in the industry, Walz said. The biggest competitors in the space are Canadian companies, the governor said.

Anthony Cortilet with the Minnesota Department of Agriculture noted that the state is “still leading the nation in hemp licensure.”