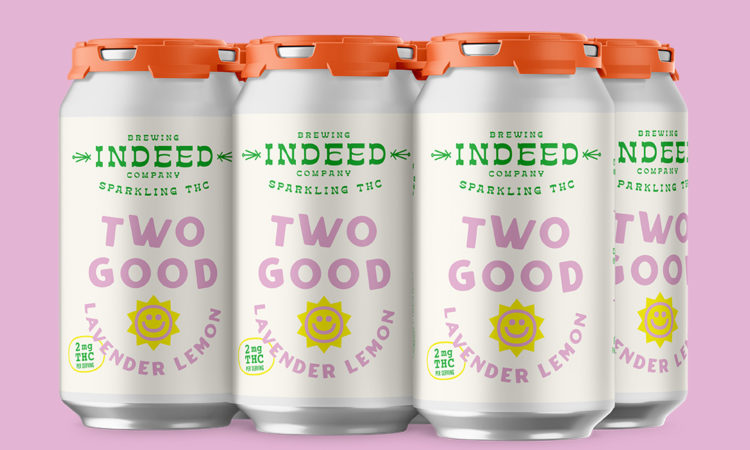 On Aug. 1, Indeed Brewing tentatively plans to launch Two Good, a seltzer that contains 2 milligrams of THC and 2 milligrams of CBD. But legal questions linger.
By Winter Keefer
July 08, 2022

It’s been one week since Minnesota cracked open the door to the THC market, and local farms and businesses are already working to tap into new opportunities.

On Aug. 1, Indeed Brewing Co. tentatively plans to launch Two Good, a seltzer that contains 2 milligrams of THC and 2 milligrams of CBD. While it will not be sold on tap, Indeed plans to make it available for retail sales at the brewery and through third-party retailers. The brewery is also planning to bring back Lul, a CBD-infused seltzer that was briefly discontinued in 2020.

On the farm side, Eden Prairie-based Verist plans to launch a new line of gummies that contain 5 mg of THC apiece. Verist is run by the same family that operates the Sever’s Fall Festival and corn maze in Shakopee.

All of these new locally-created products will use THC and CBD processed within the state.

The in-state focus of these new products emerged from a legal gray area on July 1. That was the day it explicitly became legal at the state level to consume, manufacture, distribute, and sell food and drinks containing up to 5 mg of any form of THC, so long as the substance is derived from hemp. It was the result of HF3595, part of an amendment to the nearly 1,000-page omnibus health bill HF4065. Gov. Tim Walz signed the bill into law on June 1.

At the farm level, Aaron Peterson, co-founder of Verist says the new law provides clarity on what hemp farmers can do with this particular crop in Minnesota.

To be clear, marijuana remains illegal federally and in the state. What has been made legal is the use of hemp-derived THC as an ingredient. THC is the intoxicating component in marijuana that causes the “high” people associate with the plant.

With limited guidelines from the state, it was hard for Minnesota farmers to know what could legally be done with hemp prior to the law change, Peterson noted. At the same time, many Minnesota smoke shops and retailers had already begun selling THC products because of the federal government’s 2018 Farm Bill — the same bill that made hemp farming legal across the country. The bill legalized the sale of hemp products, including hemp-derived THC in limited amounts. Within the same year, Minnesota followed up with its own hemp statute. Since then, retailers have been selling products with no more than 0.3% of THC, including Delta 9.

“I think that a lot of retailers were getting products out of state that probably were different than what Minnesota processors, growers, and manufacturers were allowed to make within our own state,” Peterson explained. “We were kind of excluded from our own state’s retail market on that stuff.”

And there are still roadblocks. The door may be ajar, but it’s still not fully open: Current state guidelines specify that THC must be derived from hemp, for example.

But, having to derive THC from hemp rather than marijuana just makes the process less efficient, said Peterson. Hemp is simply a cannabis plant that contains no more than 0.3% of Delta 9 THC. Notably, where the THC is derived from doesn’t change the compound’s intoxicating effect. In other words, you’ll still get high from THC, whether it’s from hemp or marijuana.

On the manufacturing and retail side, Indeed is able to tap into the market because of the law’s specification that THC can be used as an ingredient, said Indeed CEO Tom Whisenand. Before launching Two Good, the brewery produced a “long list of yellow lights” internally that indicate areas to navigate with caution in regard to the new law.

“Those lights need to turn green before we officially release this product and go forward with it — with everything from insurance, banking, and payment acceptance, to internal practices and legalities all around,” he said.

But Whisenand remains hopeful for the August launch date, noting that surprisingly few “lights” are still on yellow. Indeed has sought out multiple legal perspectives, which have indicated the product should be fine to launch, he said.

“We’re not looking to exploit any loopholes or gray areas in this law,” he said. “We’re looking to follow it as closely as we can and we’re also looking to other states that have a more robust regulatory environment for this.”

Unlike brewing beer, Indeed does not need to have a license to create this new THC seltzer, The CEO said. The company is using a CBD and THC extract produced by a company licensed through the Minnesota Hemp Program. This extract, which has already undergone the testing required by the state, is then used as “a simple ingredient” in the creation of the seltzers. From there, Indeed is also following state law that requires batch testing and batch-specific labeling of each product specifying its percentage of THC and CBD.

While a business may normally shy away from asking for more regulation, Whisenand says he would like to see more guidance down the line on how businesses can navigate the THC market. The brewery tries to stay mostly on the sidelines of the political space, but the CEO said it is also important to recognize that local businesses like breweries have been excluded up until this point in much of the cannabis market.

“We’re just big believers that a company like Indeed can be a good and positive participant in the industry, especially when it comes to manufacturing safe products that are consistent and follow all of the rules and regulations and laws,” he said.

Another question that remains is whether or not people could consume it on-site at the Indeed tap room.

In a Q&A by the Minnesota Department of Pharmacy, officials explicitly say products that contain substances derived from hemp cannot be added to foods or beverages by restaurants or bars. The law only allows for the production and sale of manufactured and packaged products. The department of pharmacy is the agency charged with enforcing the new law.

Whisenand noted that Indeed is primarily a manufacturer and will not be selling Two Good on-tap, therefore complying with this guideline. However, it’s not yet clear whether customers can still consume a can of the drink on site.

“They don’t explicitly say no on what we’re doing,” Whisenand said. “What if we have the can that has all the labeling and it’s just opened by the consumer and consumed on-site? We’re not pouring it for them into a glass, that kind of thing.”

This means companies may run into situations where they have to self-regulate in this particular market. Whisenand even questioned if customers should be able to consume a THC product in the same space where they’re already consuming alcohol. He sees this as an internal liability question as there is not much guidance on this aspect outlined in the law amendment itself.

In the department of pharmacy’s Q&A, officials expressed support for legislation to create an Office of Cannabis Management to have authority over everything related to Cannabis sativa. Whisenand echoed that support.

“When you’re in a space selling potentially intoxicating substances, you need to be cautious. You need to be prudent,” he said.