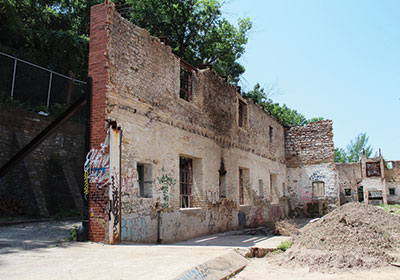 It has taken about a decade, but the Hamm’s brewery property on St. Paul’s East Side is finally getting occupants. In June, Urban Organics began production of basil, lettuce, and other greens in tanks that also are home to tilapia (which provide fertilizer, as well as another income stream). The same month, Flat Earth Brewing announced that it would be moving into some of the old Hamm’s structures from its modest digs near West 7th Street. And craft whiskey maker Mill City Distilling plans to move into one of the buildings.

The new occupants all belong to what are considered emerging industries—and despite the agricultural basis of the new residents, they could all be considered industrial businesses, not the cultural and residential tenants the city had envisioned for the site. “We decided that industrial reuse is the best use of these buildings,” says Dave Gontarek, the city’s project manager for the Hamm’s property.

To clarify: We’re talking about the part of the brewery the city of St. Paul has owned since 2004. Everett, LLC, which owns the part north of Minnehaha Avenue, has leased its property to a number of businesses and artists. Hamm’s (and its successor, Stroh’s) used those buildings for warehousing, and they were fairly easy to repurpose.

Assuming that Flat Earth and Mill City get the funding they need, both should be owners of their respective buildings by fall, absorbing about a third of the city’s property. “These [buildings] were the easiest to divide and get development going,” Gontarek says. The remaining structures “will need two or three major owners,” he adds. “It’s hard to divide them.”

P.S.: Old breweries take a long time to find reuse. The Grain Belt brewery in northeast Minneapolis, for instance, sat empty from 1975 until RSP Architects and other businesses took over the main building in 2001. Stroh’s closed Hamm’s in 1997. Schmidt on West 7th, shuttered in 1986, was reopened by Minnesota Brewing, but closed for good in 2002. It is being converted to housing.