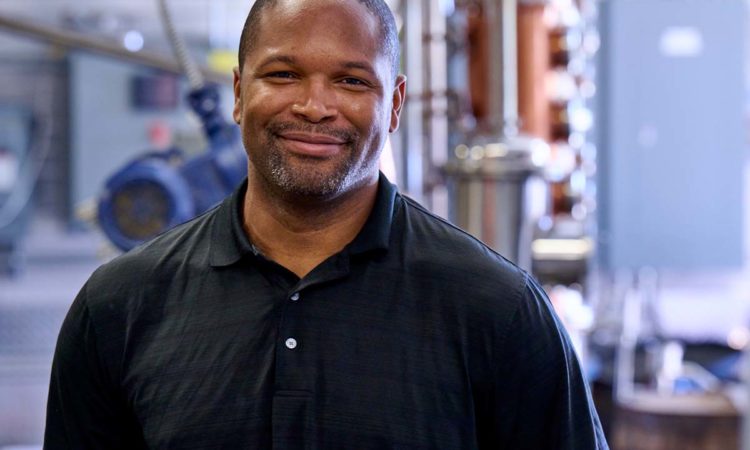 The first Black-owned distillery in the nation officially announced it will not reopen its original cocktail room, but co-owner Chris Montana has a few other plans in mind.
By Winter Keefer
July 21, 2022

Du Nord Social Spirits in South Minneapolis, the nation’s first Black-owned distillery, has officially announced it will not reopen its original cocktail room, which closed during Covid in 2020 and stayed closed after it was damaged during protests in the wake of George Floyd’s murder.

While the door to this beloved community location will remain closed, the distillery has unveiled plans to open other new spaces across South Minneapolis. The goal is to bridge the wealth gap in the city’s communities of color.

In 2023, the distillery plans to open a “spiritual successor” to the cocktail room. This space will be located in the Coliseum building on East Lake Street, just a few blocks over from the distillery. The new location will eventually work in tandem with an incubator supporting BIPOC entrepreneurs. Chris Montana, co-owner of Du Nord, says the plan is to launch both entities in the former 7-Sigma Inc. factory on 26th South Ave.

Minnesota liquor laws were different when repairs to Du Nord’s original location were underway, Montana said. It was not legal at the time for a distillery producing more than 40,000 gallons of liquor to also have a cocktail room. As production increased, the former cocktail room space was turned into a storage area instead.

“We knew at that point we were going to be over that production limit so we knew we couldn’t have one, so we made no plans to reopen it,” he said.

Shortly after that time, the law changed, he noted. Now it is possible for the distillery to have a cocktail room, but the wheels were already in motion to move into the Coliseum building, so the business stuck with that plan.

“(The Coliseum) seemed like a great place to create the spiritual successor,” Montana said. “I say spiritual successor because a cocktail room is a specific thing: a limited bar that is attached physically to a distillery. So this won’t be that.”

The Coliseum location is one of two projects Du Nord is working on with Redesign, a local non-profit community development corporation. The other project in the works is underway at the former 7-Sigma on 26th South Ave, just a few blocks north of its original cocktail room. At the 7-Sigma building, the distillery is looking to launch a food and brewery incubator. Du Nord will partner with the Healthy Roots Institute to put entrepreneurs through culinary training and operate an incubator businesses to provide food at its new location at the Coliseum.

While the location will not include a distillery, Montana said the successor space will bring a similar atmosphere. The new space will offer food, which was not available in the original cocktail room. Without the constraints that come from operating as a cocktail room, the new space will also be able to expand its offering outside of just Du Nord spirits.

“It gives us a cool platform to bring in other micros, particularly other Black- and brown-owned distilleries and there have been more and more of them every day,” he said.

For example, Montana said he wants to find a way to offer potato-based spirits from Delta Dirt, a family-owned, Black-owned farm distillery operating out of Arkansas.

Minnesota liquor laws have already pushed distillers out of the state. Last year, for example, Tattersall expanded its production operations into Wisconsin in order to maintain its cocktail room in the Thorpe building in Northeast Minneapolis.

When Du Nord started producing more than the 40,000 gallon limit in Minnesota (one of the lowest in the country), the cost of an annual license to operate went from around $2,000 to $30,000, Montana said.

“If we had picked up that production and set it in Wisconsin, that fee would come right back down to lower than what it was before. So there’s a huge incentive when you’re in the Twin Cities and 40 minutes from the border … to just move your production out of state.”

However, community support from South Minneapolis is the only reason Du Nord exists today, Montana noted. Most of the distillery’s revenue over the years came from its cocktail room. It is the distillery’s mission to not only remain in the community but also give back to it and provide an opportunity for locals to foster generational wealth.

A party is planned for the community that has supported and sustained Du Nord Social Spirits during its first nine years. It will be held at 5 p.m. on Aug. 4 at Du Nord distillery at 2610 E 32nd St. and will serve as a farewell to the original cocktail room.

The event is free, but registration is required.

Listen: On By All Means podcast, Chris Montana shares his founders journey and mission to move beyond the label of “Black distiller.”