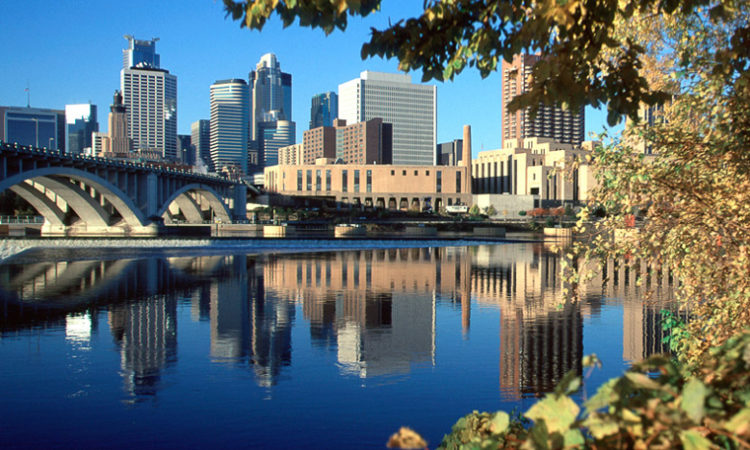 The city’s urban core added about 3,000 more residents in 2021, according to the Minneapolis Downtown Council.
By Dan Niepow
February 09, 2022

Downtown Minneapolis is not dead yet. Despite a pandemic, civil unrest, and spurts of violence, people still want to live downtown.

That’s one of the main messages Minneapolis Downtown Council leaders tried to convey at their 66th annual meeting on Wednesday. According to the council’s data, downtown’s population grew by 5.6 percent to 56,077 residents in 2021.

That followed another small population bump in 2020.

Steve Cramer, CEO and president of the Minneapolis Downtown Council, said the figures show “continued interest in living in the city’s core.” The council’s long-term goal has been to hit 70,000 residents by 2025.

The future of downtown Minneapolis has, of course, been an open question for years, even before the Covid-19 pandemic upended the usual flow of office workers in the area. But Cramer and other downtown boosters are hopeful the region is turning a corner. Cramer noted that about 41 percent of the usual downtown workers have returned to their offices “in some capacity.”

“The downtown workforce looks vastly different than it did in pre-pandemic times,” Cramer told attendees Wednesday. “There are still 216,000 employees at companies located downtown, but they’re showing up differently. … Many are returning one to three days per week. Most companies have developed and are implementing return-to-office plans.”

As in prior years, the downtown council also shared the top 15 employers in downtown. But unlike previous years, the council opted not to rank the list by headcount this year. “As we learn more about the future of work and continued flexibility for workforce, we have decided to share out in a way that it is more reflective of the broader downtown workforce community,” a council spokesman said in an email.

Cramer and other speakers believe that a full-scale rejuvenation of downtown will hinge on improved public safety. Repeating a similar refrain he used during the council’s 2020 meeting, mayor Jacob Frey said that “you can’t have a world-class downtown unless it is safe – unless you have that foundation, perception, and reality of safety.”

His solution for a safer downtown? In part, better law enforcement. The key, he said, is to attract “the most community-oriented officers” to the Minneapolis police force.

“We need to pay our officers more to make sure we get those community-oriented officers to sign up. We need to train them better. And we need to hold them more accountable,” Frey said. “All of those things are true.”

Whether more law enforcement would actually improve downtown is up for debate. Just one week ago, Minneapolis officers shot and killed 22-year-old Amir Locke in a downtown apartment while they were executing a “no-knock” warrant for another individual. Locke was not named in the warrant, and he was not a suspect in any crimes, despite the department’s initial communications to the contrary.

Locke’s death has prompted some to call for the resignation of Minneapolis police chief Amelia Huffman.

Not far from the council’s meeting at The Armory, a group of high school students staged a sit-in at the Minneapolis City Hall in protest of Locke’s killing, local independent journalist Georgia Fort reported on Twitter.

The downtown council started its Wednesday meeting with a brief reflection about Locke’s death. “Our beloved community is in pain, with what I call ICU complications,” said reverend Ian Bethel in opening remarks. “We have endured two years of trauma since the tortuous death of our brother George Floyd, and even as we meet today, Amir Locke’s trauma is compounding and conflicting all of us.”

Meanwhile, during his remarks, mayor Frey announced plans to lift the city’s test-or-vaccination mandate for bars and restaurants. Though he didn’t announce a precise date, he said he hopes to remove the requirement “in the very near future.”

“I hope this week,” Frey said.

The mayor said he’s willing to lift the mandate due to the declining number of Covid cases in the area. Separately, a few restaurateurs with operations in both the suburbs and Minneapolis have said that the mandate was hurting their business.

The mayor appears to be following in the footsteps of St. Paul mayor Melvin Carter, who’s also announced plans to remove his city’s vaccination mandate this week.

Editor’s note: A day after the downtown council meeting, both mayors said they are removing the mandate immediately.