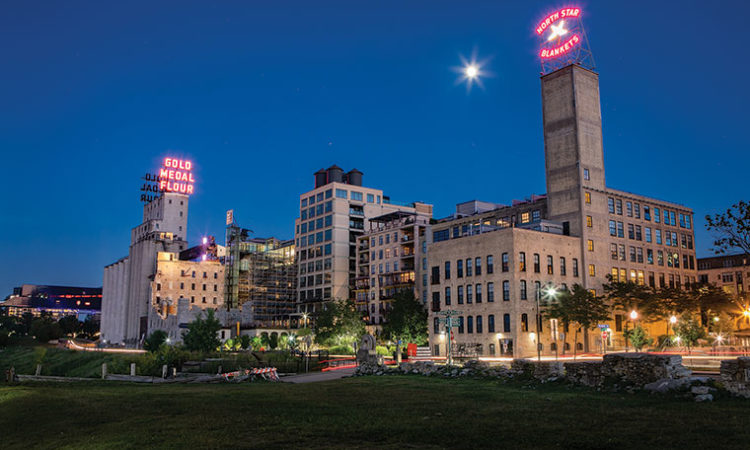 The number of residents in downtown Minneapolis has grown 60 percent since 2006.

The number of downtown residents grew 3 percent over the prior year.
By Dan Niepow
February 12, 2020

The population in downtown Minneapolis continued to grow in 2019, though not at the same clip as in prior years. At the end of 2019, there were 51,288 residents living downtown, up 3 percent over the prior year, according to the data released Wednesday by the Minneapolis Downtown Council.

For perspective, the downtown population grew by nearly 15 percent between 2017 and 2018.

The mood at the council’s annual meeting on Wednesday was nonetheless jubilant. John Marshall, Xcel Energy’s director of community relations for Minnesota and the Dakotas, took the stage in the center of the Armory and announced the residential data after a drumroll, followed by indoor pyrotechnics.

“We are officially more than halfway to our 2025 Plan goal of doubling our downtown residential population,” Marshall said, noting that downtown population has grown by 60 percent since 2006.

The council also gave a quick overview of the top 15 employers in downtown Minneapolis. Unsurprisingly, Target remained the largest employer downtown with about 8,500 workers. (The retailer has been the top employer downtown for several years, including 2018 and 2017.) Next up was Hennepin Healthcare with 7,175 employees.

Of the top 15 employers in downtown Minneapolis, eight increased their headcount in 2019. Meanwhile, SPS Commerce—which fell off the top 15 list in 2018—was the 13th largest employer in 2019, counting 1,037 workers. The Star Tribune ranked 15th with 926 employees. The paper’s headcount has been gradually decreasing over the years, according to council data: In 2017, the Strib employed 1,096, and in 2016, it declined to 942.

The council’s annual meeting took place in the shadow of a Star Tribune report about a massive uptick in crime downtown. (The paper was also among the presenting sponsors at this year’s event.) For instance, crime in the Downtown East neighborhood grew 70 percent in 2019, according to the paper.

During Wednesday’s downtown council meeting, Minneapolis mayor Jacob Frey noted that the city has made new investments in public safety. The city has increased the number of annual recruiting classes for police officers from two to three, and has spent more than $500,000 on various violence prevention initiatives, Frey said.

“You won’t have a world-class downtown until it’s safe and you also have the perception of safety,” he said.

During a panel discussion later on in the meeting, Empire Hospitality owner Erik Forsberg conceded that safety isn’t a problem that can be “solved.”

“Safety is something that we manage,” said Forsberg, who owns the Devil’s Advocate and Dan Kelly’s Pub downtown. “And it’s a problem we are managing. Everybody in this room has to be invested in that idea because this is your community.”