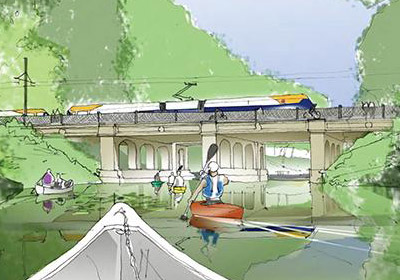 Did The Massive Federal Spending Bill Just Screw Up Funding For Southwest LRT?

In a word: maybe, thanks to a section in the recently-passed federal spending bill that has raised questions about the feds' share of the bill for the light rail project.
December 27, 2014

A short section in the thick, $1.1 trillion federal budget bill passed over the weekend has raised questions about hoped-for federal money for the massive Southwest LRT project.

The language, said former U.S. Rep. Martin Sabo, displays a change in policy led by congressional Republicans to reduce the federal government’s share of proposed light rail plans known as New Starts. While the Met Council has been budgeting for the Federal Transit Administration to cover half the cost of the $1.65 billion extension, the budget language indicates the federal share could fall to 40 percent.

If that's the case, when Met Council makes its request for a full-funding agreement — when the federal government gives its final approval for a project and provides its share of the cost — the council would need to find an additional $165 million from state and local sources. That would be on top of the more than $800 million they are currently expected to pay.

A spokeswoman for the project said Monday that the budget language covers projects that are seeking money in 2015. Southwest LRT will not be asking for money until 2016. “The Continuing Resolution pertains to (fiscal year) 2015 and only affects New Starts projects submitted for that fiscal year. At this point, it's not possible to determine the impact on projects after (fiscal year) 2015,” Laura Baenen said via email.

Sabo, who represented the 5th Congressional District from 1979 to 2007, said there are two problems with that reasoning. “I think this is likely to stand in future Republican budgets,” he said. And the same budget expressed intent that only New Start projects rated “medium high” or “high” will be funded. The SWLRT project is rated “medium.” The ratings are an assessment of projected ridership, economic development impacts and environmental benefits, among other factors.

Sabo’s analysis was touted by opponents of the currently approved route of the extension, especially its passage through the Kenilworth Corridor. In an email sent to supporters, Mary Pattock of LRT Done Right quoted Sabo saying that the budget “fully funds transit projects for which there are already full funding agreements in place; this does not include SWLRT.” And that it, “fully funds those projects for which the federal share is less than 40 percent; this does not include SWLRT, for which the requested federal share is 50 percent.” (Sabo’s daughter Julie is a member of LRT Done Right and has written commentaries opposing the project as currently designed.)

A congressional source familiar with the issue, however, does not read the budget language the same way. First, the Met Council has not yet even applied for its full-funding agreement with the Federal Transit Administration. That isn’t expected until 2016, after further environmental analysis, engineering and final design is completed and approved.

Should it receive that full-funding agreement under the agency’s New Starts process, it would be in line for funding, even under the language adopted in the appropriations bill. That’s because the budget states: “that when distributing funds among Recommended New Starts Projects, the Administrator shall first fully fund those projects covered by a full funding grant agreement.”

Only after those projects are funded does the next section of the language — the reference to projects with only a 40 percent federal share — come into play.

The state and local shares are in place except for $120 million of the state share, which would have to be approved during the 2015 legislative session to keep the project on schedule. Some in the new Republican House majority, however, have pledged to block the funding and slow down light rail expansion.