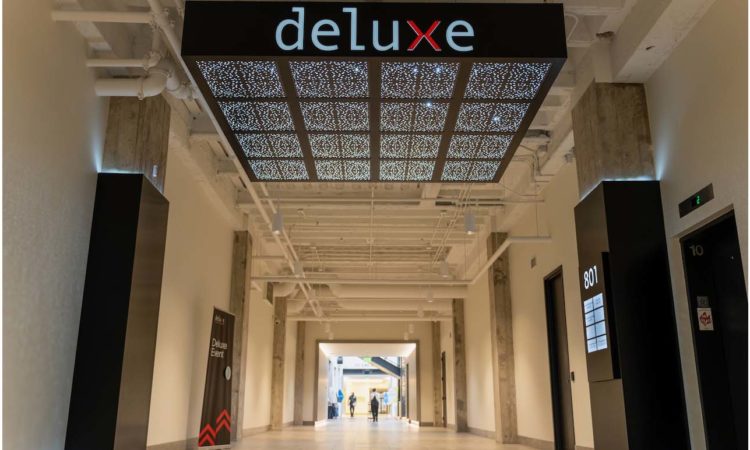 On Thursday, the company held a ribbon-cutting ceremony for its new 94,000-square-foot space, which looks more like a coworking space than a traditional office.
By Dan Niepow
October 28, 2021

On a drizzly Thursday afternoon, local dignitaries gathered to toast to Deluxe Corp.’s new downtown Minneapolis office. Rows of champagne glasses lined a table at the foot of a staircase, where news crews gathered with cameras and microphones.

It had all the makings of a standard ribbon-cutting ceremony: a pair of comically large scissors, a gaggle of optimistic execs, and a celebratory air. But we are not, of course, in standard times, as evidenced by the sea of masked faces gathered in the new space.

Downtown Minneapolis, too, is still a shell of its former self. According to figures from the Minneapolis Downtown Council, only about a third of downtown workers had returned to their offices as of mid-September.

But Deluxe leaders are evidently undeterred. Deluxe CEO Barry McCarthy said that the decision to relocate from Shoreview to downtown Minneapolis was very much intentional.

“As we pondered our future, we really wanted to think about where our company wanted to be,” McCarthy told attendees. “We did a pretty extensive search across the Twin Cities, which is our home base obviously, and we landed on this location in downtown Minneapolis … I feel like we have landed in a place that is exactly at the main intersection of the very heart of downtown.”

The company’s new 94,000-square-foot headquarters spans two floors at 801 South Marquette Ave., the same building that houses the CommonGrounds coworking space. The space also includes one floor in the 8th Street Tower. Like its new neighbor, Deluxe’s new HQ is more like a coworking space than a traditional office. Gone are the rows of cubicles and assigned seating. Instead, employees will have a slew of “collaborative” workspaces to choose from.

“This space is designed absolutely for today, and tomorrow,” McCarthy said. “There are no individual offices. We are entirely committed to the notion of collaboration, which is what tech companies do. It allows us to actually be together and work together as teams without being locked behind a door in some immovable box.”

Deluxe leaders said that the new office is a symbol of the company’s shift to a broader payment services company. Founded in St. Paul more than a century ago, Deluxe has long been known for printing checks. These days, though, the company has ventured into digital marketing services, alongside traditional financial and payment services. Deluxe also produces a streaming TV series called “Small Business Revolution,” which is aimed at helping struggling small businesses. The latest season of the series is dedicated to Black-owned businesses across the Twin Cities.

Minneapolis mayor Jacob Frey, who hopes to secure a second term as mayor in next week’s elections, said Deluxe’s decision to move downtown bodes well for the city. Deluxe will bring more than 500 workers to the new space.

“It is rare, even during non-pandemic times, [to see] 500 employees suddenly locate to downtown,” Frey said during Thursday’s ribbon-cutting ceremony. “To get that right now shows that Minneapolis — specifically downtown — is on a comeback right now. Are we there yet? No, but we are definitely on the move.”

Deluxe will begin bringing its workers back in phases starting Nov. 15. The ultimate goal is to bring all employees back at the start of the new year. 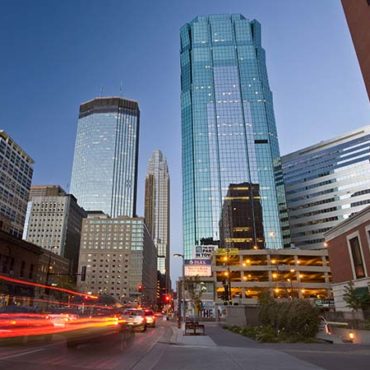 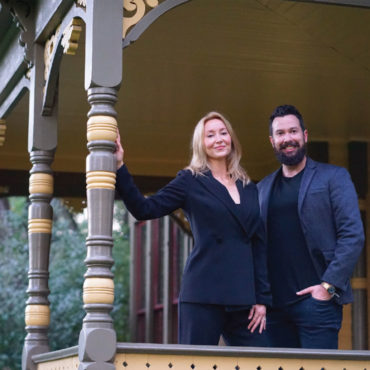