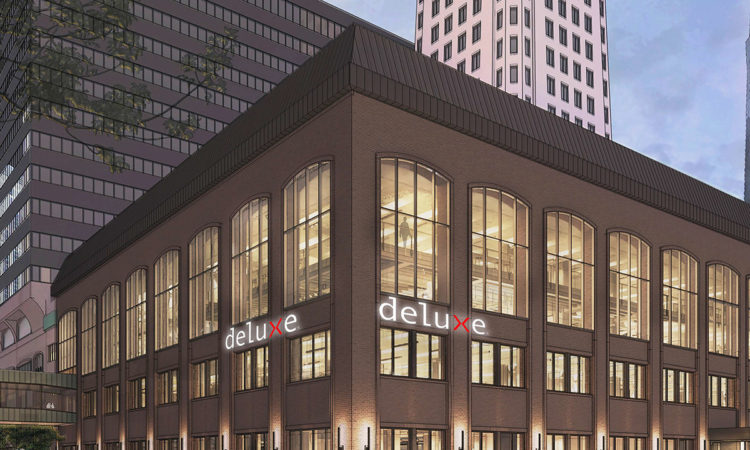 Shoreview-based Deluxe Corp. has signed a lease for 94,000 square feet at 801 Marquette to relocate its headquarters to downtown Minneapolis. The move comes at a time when many are fretting about the health of downtown, which has been largely abandoned during the pandemic while also grappling with public safety concerns.

The news was big enough to draw Gov. Tim Walz to an early afternoon press conference announcing the deal. Minneapolis Mayor Jacob Frey was also there along with company executives, Minneapolis Downtown Council representatives, and other dignitaries.

“We’ve been working on this for more than a year,” said Barry McCarthy, Deluxe’s president and CEO. “We looked everywhere in the metro.”

McCarthy said that the downtown location is a good fit for the evolution of the company’s business.

“Our company is going under fundamental transformation to become a trusted business technology company,” said McCarthy. “We needed an environment and location that would support the transformation and are very pleased to have found a great spot in downtown Minneapolis.”

The space will be geared towards a new, more flexible work model.

“We fully anticipate that we will operate a hybrid operating model where people are in the office some days, working from home other days [or] travelling to see customers,” said McCarthy. “The space will support more than 500 [employees] at any given time.”

The deal follows the recent sale of the company’s Shoreview campus. The 801 Marquette space is currently vacant and will be built out over the next year. Most of the company’s Minnesota employees will continue working remotely until the new space is complete in the fall of 2021.

The deal calls for Deluxe to occupy the third and fourth floors of the four-story 801 Marquette building and the seventh floor of the connected 121 South 8th tower. The complex was once known as the home of TCF Bank.

Christianson said that there are more big deals for downtown Minneapolis in the pipeline.

“There’s some large transactions that are in the works,” said Christianson.

Deluxe is a long-standing name in Minnesota business circles. The company was founded in 1915 as Deluxe Check Printers. For years the company, which invented the checkbook, was best known for printing paper checks. It now has a broadened strategy that also handles small business and financial services. Deluxe reported $2 billion in revenue for 2019.

Given the market uncertainties, Deluxe is not currently offering financial guidance to Wall Street analysts but has said that it expects to see a “slight improvement” in revenue for the second half of the year.

The company’s second quarter financial filing noted, “During the second quarter, we continued to evaluate opportunities to consolidate our real estate footprint. Based on the success of our work-from-home model, we accelerated the closure of 20 of our facilities, some of which were closed during the second quarter of 2020, with most of the remainder expected to be closed by the end of the year.”

Last Wednesday, Deluxe announced its selection of the Atlanta suburb of Sandy Springs for a tech office that will house approximately 700 employees. The center will include the FinTech Innovation Center and a Customer Experience Center. Deluxe is investing $12.6 million in upgrading the space.

There is no shortage of office space for lease in downtown Minneapolis. The Dayton’s Project, an overhaul of downtown’s last department store, has approximately 750,000 square feet of office space available and no signed leases.

Deluxe’s decision to come to downtown Minneapolis is a major boost.

“We’re very excited to be part of the solution,” said McCarthy.