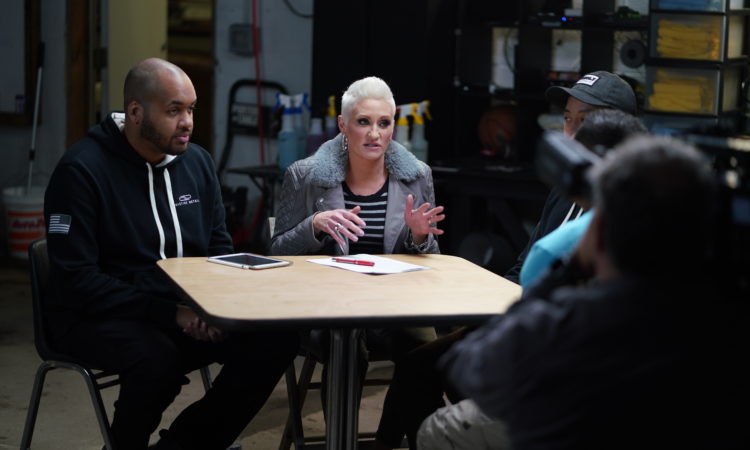 In past seasons, the show travels to a small town somewhere in the country to help Main Street businesses turn their luck around. The show’s hosts and guest experts offer business tools and advice—everything from marketing strategy to financial advice to design improvements. This year, though, the show isn’t traveling far, or to a small town. Deluxe announced today that Season 6, airing this fall, will be based in Deluxe’s hometown of Minneapolis-St. Paul.

The show will spotlight six businesses from six neighborhoods across the Twin Cities, with each episode focusing on one neighborhood and its selected business. The participating neighborhoods are Rondo, Frogtown, and East St. Paul in St. Paul, and Lake Street, West Broadway, and South Minneapolis in Minneapolis. Season 6 will also focus its energies and total budget of $500,000 on Black-owned businesses within those neighborhoods.

“After last summer, I think companies and community groups have come together to be a part of the solution and the healing process in Minneapolis and St. Paul,” said Amanda Brinkman, Deluxe’s chief brand and content officer and “Small Business Revolution” creator and co-host.  “We’re excited to be able to use this storytelling platform to highlight what incredible Black-owned businesses and entrepreneurs we have here in Minneapolis and St. Paul. We’re hoping that these stories resonate with people nationwide, that entrepreneurs can learn from this journey, and that we can use our platform to celebrate Black-owned businesses and highlight Black excellence.”

For Season 6, each episode will tell the story of the featured community in addition to the business within the neighborhood that they’re serving. As is typical, Deluxe will help with marketing and bring in other large business partners to help. U.S. Bank is coming back to offer financial advice. Salesforce will also return, but this year, they’ll be bringing the experts for the season—each year, “Small Business Revolution” calls on an industry expert for each business to guide them in the process—using their network of accomplished entrepreneurs. This season, Lenovo also joins the team, providing technology hardware, like tablets, to the small businesses.

The location isn’t the only thing changing this season. “Small Business Revolution” is also welcoming a new co-host for Brinkman. Baron Davis, retired two-time NBA All-Star, TNT sports commentator, and serial entrepreneur, will replace carpenter and television personality Ty Pennington who co-hosted Seasons 3, 4, and 5. Davis is the founder of a number of companies including professional athlete content studio Sports Lifestyle in Culture (SLiC); sports, media, culture, and tech platform Business Inside the Game (B.I.G.); and diversity-building digital media company The Black Santa Company. He was also an early investor for both Vitaminwater and Thrive Market.

Davis says he’s long been a fan of “Small Business Revolution,” but after he and Brinkman spoke on a technology conference panel together back in late 2019, he became even more excited by the show and Brinkman’s mission to help small businesses.

“This is something new. It’s not just television—it’s purpose-entertainment, edu-tainment content,” Davis said, “Not only does it pull at your heartstrings, but it gives you the information; it gives you the type of levity where you feel and relate to these entrepreneurs.”

Davis added jokingly, “I kind of harassed Amanda and said, ‘If you need help finding a co-host…’”

Brinkman says she and Deluxe were thrilled to not only have someone of Davis’ notoriety as co-host, but also to have someone with such an entrepreneurial journey behind them: “The show is always very much about bringing authentic help to the table, so we’re just really excited about his own entrepreneurial journey and his passion for storytelling and really rich content,” Brinkman said. “And to boot, he’s really fun.”

Filming of Season 6 is set to begin in late April and run through July.

Brinkman says Deluxe hopes to be able to film the majority of the show in person this year while following Covid-19 health and safety protocols.

The brainchild of Brinkman, “Small Business Revolution” started in 2015 as a marketing vehicle for Deluxe as it worked to shed its reputation as an old-fashioned check printing company and evolve into a full-service, technology-focused financial services provider for small businesses. Today, “Small Business Revolution” has developed a following all  its own, and a reputation for reviving and supporting small businesses.

“Deluxe has been serving millions of businesses for 106 years. We understand what it takes for small businesses to succeed,” said Deluxe president and CEO Barry McCarthy. “Deluxe, through the “Small Business Revolution,” has made a tangible difference not only for the businesses we have featured, but also for millions of business owners and entrepreneurs across the country who have seen the show and use our solutions. This is all part of the Deluxe commitment to help small businesses and communities thrive, whether in a small town or major city.”