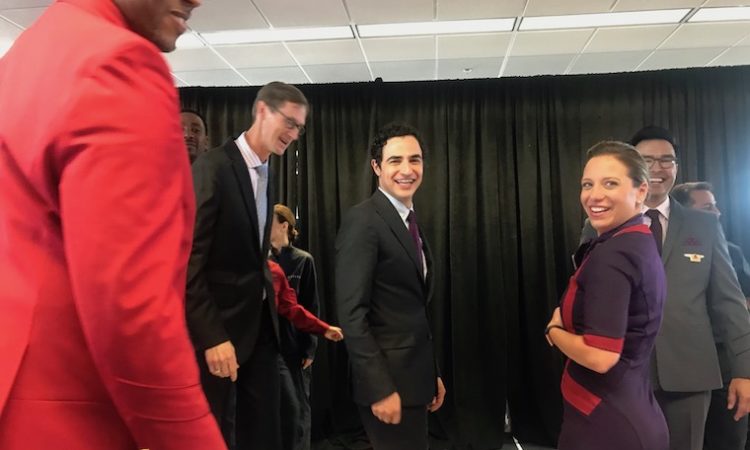 Tuesday’s roll out for 64,000 employees included a runway show at MSP Airport with designer Zac Posen.
By Allison Kaplan
May 29, 2018

Delta Air Lines rolled out the purple carpet at Minneapolis-St. Paul International Airport on Tuesday, and it had nothing to do with a Prince memorial or the Vikings.

The airline debuted its new Zac Posen-designed uniforms, which combine the old red and blue into a new signature color dubbed Passport Plum. Posen himself touched down in Minneapolis for a runway show in MSP’s Delta Terminal with airline employees as models. It was part of a cross-country launch that took off at headquarters in Atlanta before landing in Minneapolis—the airline’s second largest hub—and then continuing on to Los Angeles, with fashion shows in the sky along the way. Posen was joined by executives from Wisconsin-based Lands’ End, which manufactured the uniforms and worked with Posen on designs for the “below-wing” gear worn by grounds crew, cargo agents, and the maintenance team. In all, the new uniforms—which still incorporate Delta's “Cruising Cardinal” red—will be worn world-wide by 64,000 Delta employees in airplanes, airports, and hangars.

“I’ve never had so many people getting dressed in my designs all at once,” Posen said Tuesday at MSP.  “Delta wanted to stand out everywhere around the world. They wanted to bring the power of the diverse Delta community to the uniform—diversity of age, body shape, background. To me, the color (purple) unifies that.”

Each employee received a uniform kit valued at $700 to $1,000. Male flight attendants had the choice of a sweater and a mock neck. For women, options included skirts, dresses, pants, and a peplum jacket. Delta says the v-neck dress was the top pick, and overall, dresses have been more popular than pantsuits. The last uniform update for flight attendants and other “above-wing” employees was 2006; below-wing workers haven't had new uniforms for 18 years.

“I’m just so excited it has pockets,” commented one flight attendant in her new purple dress.