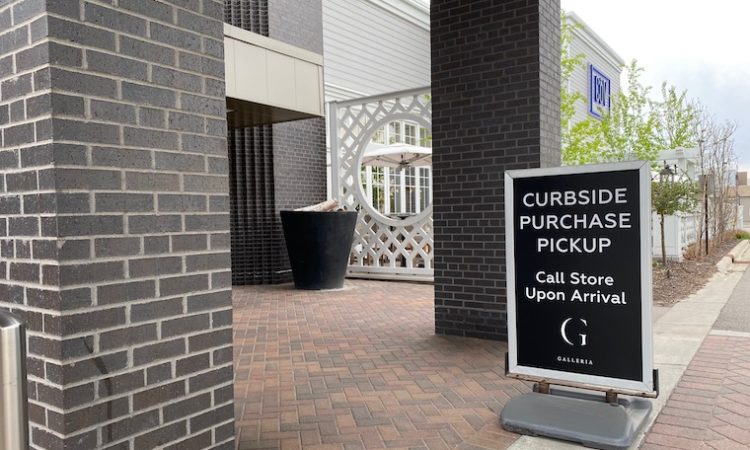 What’s selling and what’s next as “non-essential” stores open for pickups this week and look for new ways to connect with shoppers.
By Allison Kaplan
May 05, 2020

Curbside service opened Monday for many Minnesota retailers that had been forced by state order to close in March due to Covid-19, but store owners aren’t celebrating. In an informal survey of local apparel, gift and home retailers that fall into the “non-essential” category, the overarching sentiment among owners was that small businesses are being held to a higher standard than big box stores.

“Most of us never have a distancing problem,” says Dana Swindler, CEO of MartinPatrick 3, the North Loop lifestyle store. “The average 1,110 square foot boutique might have two or three people in at a time. Meanwhile, the parking lot at Menards is packed and people who work at grocery stores don’t even have to wear masks and gloves. Everyone says they’re worried about us small guys. Meanwhile, we’re all dying we don’t have tons of capital like the big guys do.”

“I know that Gov. Walz is trying to do what he believes is necessary, but I don’t think he realizes how tough and unfair this is,” says Bill Damberg, owner of Brightwater Clothing & Gear in Excelsior. “I can’t speak for everyone, yet I believe most of us small retailers are hanging on by a thread.”

MartinPatrick 3’s sales are down 90 percent for April compared to the same period last year, Swindler says. North Loop women’s shop Parc Boutique is down 60 percent compared to April 2019. Edina swimwear boutique Nani Nalu has lost $850,000 in revenue during what is typically its busiest season, owner Jennifer Cermak says. She received a Payroll Protection Program loan but says it’s “useless since the store can’t open and we can’t have our employees working at capacity at all.” Despite attempts to negotiate with her 50th & France landlord, Cermak says she has not been offered rent relief.

“We’ve been supportive of the decisions made by the governor, but we are reaching a breaking point,” says Cooks of Crocus Hill co-owner Marie Dwyer. “Target and Menards are filled with customers while small business is closed. If this drags on any longer, we’ll be joining the chorus of people saying that the cure is more destructive than the illness. Our fear is that the fall out will be insurmountable.”

Minnesota Retailers Association President Bruce Nustad has been working closely with the governor’s office and advocating a phased reopening plan. He spoke at Walz’s press conference last week when the greenlight on curbside was announced. The frustrations small business owners are expressing “are certainly legitimate,” he says. “Based on the conversations we have had, we know the governor is well aware of them.

“The reality is, curbside was our ask to get revenue to those closed stores sooner than waiting for a full opening, which the governor isn’t ready to do at this point,” Nustad says. “But on the direct question of fairness, it’s not, and we are working toward getting everyone open. We know the shops not open today can be as safe as the shops open today.”

At Galleria in Edina, 16 retailers—about half of them locally owned—started curbside pickup on Monday, and the shopping center reports it went better than expected. Among the national retailers, Louis Vuitton reportedly had an “incredibly busy day” on Monday and the Williams Sonoma staff was “exhausted from running orders to the door.” Galleria has has assigned participating retailers and five restaurants, including Starbucks, one of seven doors to avoid too much cross traffic. With Mother’s Day approaching on Sunday, luxury jeweler Tiffany & Co. plans to join Galleira’s curbside program on Thursday.

Shoppers seem to be buying gifts and things can use now: sweatpants; items for the home.

St. Louis Park-based outdoor furniture brand Yardbird reports that it did $1 million in sales over just the past seven days as consumers plan to spend more time at home this summer.

At MartinPatrick 3, which sells high end furniture and designer menswear, it’s the little things that are selling: fragrance, candles, soap. “The stuff that makes you feel good at home,” Swindler says. “But even if we’re selling lots of it, at $30 per, it just doesn’t add up.” 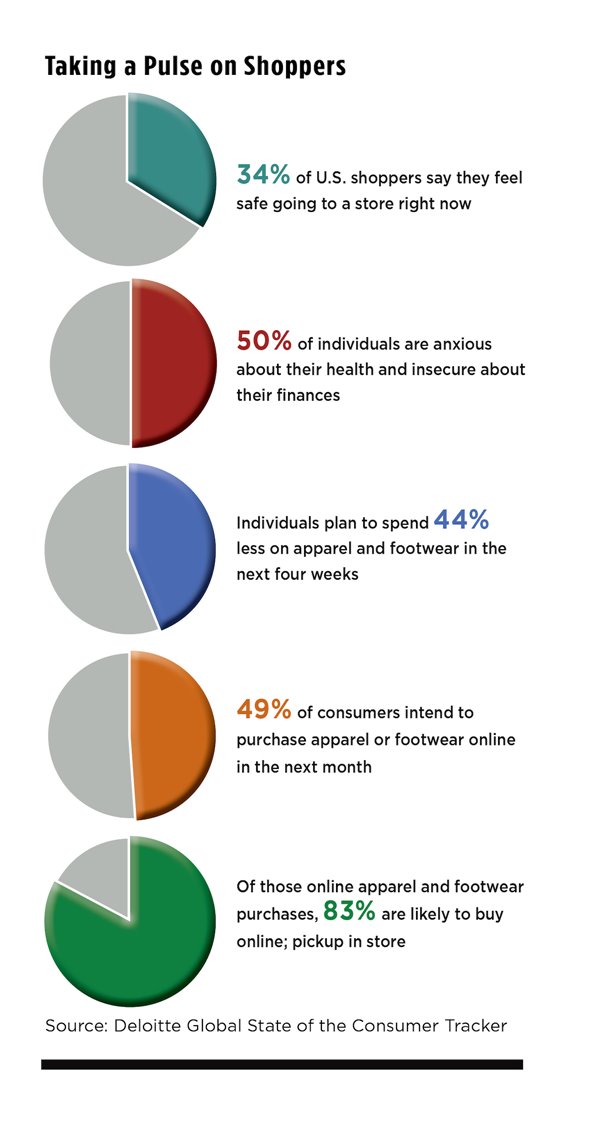 “Pickup is a waste of time,” says Caryn Kelly, co-owner of women’s specialty store Melly at the Galleria. “Our inventory is just rotting and there’s nothing we can do.”

But for bluebird boutique just down the street at 50th & France, “Curbside has been great,” Martin says. “We ship for free, but I think it’s a good way for people to get out of their house. I think curbside will stay around after this because it’s so convenient.”

Like many small retailers, bluebird is leaning more heavily than ever on social media to engage its clients and show them what’s in store.

Brightwater is a cozy neighborhood shop with creative window displays and racks of premium outerwear that shoppers are usually encouraged to try on to feel the value. “Brightwater is all about the experience and the tactile,” Damberg says. “People come to Brightwater to find something that they don’t know they need—until they need it. That is really difficult to translate to a curbside pickup.”

Damberg started a weekly “Shopkeepers Journal” on the Brightwater website to stay connected to customers. “It’s all about that connection,” he says.

Before the pandemic, the Brightwater website served primarily as an informational site to direct shoppers to the store. Damberg has stepped up ecommerce by partnering with some of his vendors. Other local retailers that had made the conscious decision to focus on in-store over online are now scrambling. Patina, which shut down its e-commerce site several years ago, got a new one online in just a couple of weeks. “It’s not ideal,” co-owner Christine Ward says. “For us, we’re an experiential store. We’re bricks and mortar. But this has forced us to move in that direction.”

Even so, Patina is finding new ways to offer individualized service—helping customers pick out gifts over the phone; texting photos of products they might like.

Longtime neighborhood retailers Dan Marshall and Millie Adelsheim offered e-commerce when they ran Peapods Natural Toys in St. Paul. But four years ago when they launched their new Grand Avenue store, Mischief Toys, they made the conscious decision to avoid online sales. Instead, they created game rooms and hosted events where people were encouraged not just to shop, but to play. “Our whole idea was to have a space where you experience being there, finding things you might not have thought of,” Marshall says. “We really wanted to focus on building community. We’re extremely lucky the community we’ve built around us has been so supportive.”

With advice from Kiddywampus toy store in Hopkins, Mischief introduced Facebook shopping events where Marshall or his wife or daughter show off games and puzzles and viewers can claim items by commenting in real time.

Although its North Loop shop is small and intimate, Parc Boutique built a national following through social media and capitalized on that by introducing e-commerce five years ago. It has been helpful in weathering the store closure, owner Thao Bui Nguyen says. Still, “our brick and mortar is definitely a big chuck of our business so not getting that foot traffic was a huge chunk of cash flow coming out of our business, and then there’s overhead costs, payroll, etc.”

Parc has “tried to get creative via social media,” Nguyen says. The shop is offering “virtual try-ons,” curating gift bundles onlie and offering free shipping on all U.S. orders.

View from the windows at Parc Boutique in the North Loop.

Across the board, the small retailers we spoke to said they feel ready to reopen safely.

MartinPatrick 3 and Patina are among the stores that have purchased plexiglass for their checkout counters. “We have hand sanitizer everywhere,” MartinPatrick 3’s Swindler says.

Serge and Jane, a new Edina boutique, has ben adding to its “Covid Preparedness Plan” every day, co-owner Jamie Carl says. “We already had routines around cleaning all service areas often. We’ve discussed shopping appointments, limiting customers in the store to one or two at a time, taping 6-foot squares on the ground. In a 1,000-square-foot space, it’s very easy for us to provide a safe shopping experience for the customers as well as our employees.”

But bringing back employees could be a challenge. Some store owners said it’s tough to compete with unemployment checks that can be collected while staying home. Others, like Nani Nalu’s Cermak says many of her sales staff are unable to work while their kids are home without school or daycare.

When they do open their doors, merchandise selection is likely to be thinner. MartinPatrick 3 has already cancelled European buying trips and reduced fall orders by 30 to 50 percent.

Having survived the 2008 recession, Melly’s co-owner Kelly says she knows what to do: “get rid of your merchandise as fast as you can at whatever cost it takes. Buy very lean for the next 18 months. It will take a very long time to recover. Unfortunately I think there will be very few of us that come out on the other end of this.”