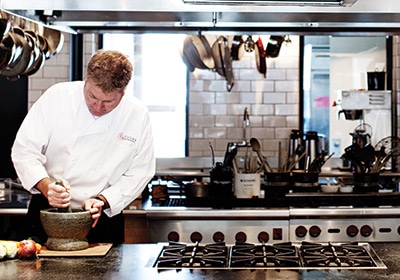 Competing via relationships instead of transactions.
December 02, 2013

When Cooks of Crocus Hill founder Martha Kaemmer retired in 2007, longtime employees Karl Benson and Marie Dwyer assumed ownership of the kitchenware and cooking class institution. (Benson had held a stake since he came on board in the late 1990s.)

Within months, national kitchenware store Sur La Table opened a stone’s throw from Cooks’ 50th & France store. That stone has been firmly lodged in Cooks’ shoe ever since. “The challenge is that they sell all the same products as us,” says Benson. “Cooks is atypical in that we’re not transactional in our relationship to retail and branding and business; we’re very relationship-focused. That community of food is our point of differentiation.”

Community has always been a focus at Cooks, which offers cooking classes open to the public at all of its locations. Its partnership with HealthPartners’ yumPower cooking classes was a natural extension. “The whole point of our wellness initiative is really just teaching people how to cook,” says Benson, “and we’re really good at that.”

As the business development guru at Cooks, Benson says he’s learned a lot through various expansions and subsequent contractions. A mid-2000s venture in Southdale failed as the center lost tenants and cachet during ownership transitions. Before that, Cooks licensed its brand as the gateway to the housewares department at Marshall Field’s top 15 stores, only to have Macy’s terminate the contract after it acquired the stores from May Company. “We refer to that as our halcyon days of marketing and branding education,” Benson says with a laugh. “Field’s giveth and Macy’s taketh away.

Now in its 40th year, Cooks is riding high. Following a new store opening in Stillwater last year, it was honored by the International Housewares Association when it won the 2012/2013 Global Innovators Award. Benson credits this success to that commitment to community, and continuing “the legacy Martha put into place.”