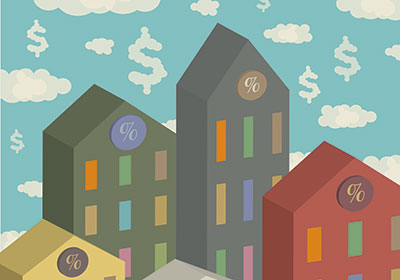 The industrial market is the busiest commercial category, and office vacancy rates are dropping.
By Burl Gilyard
January 01, 2015

Looking ahead to 2015’s potential, real estate brokers and developers are clearly feeling more optimistic than they were in the dark days of 2009 and 2010. Even so, the recovery has remained gradual. The new optimism for the market is still tempered with a healthy dose of caution. Companies continue to look for ways to trim real estate costs.

But there are pockets of strength. Local office vacancy is at its lowest point in years, the industrial market is going strong, speculative office development is returning to downtown Minneapolis and the investment sales market for selling properties is robust. Many local brokers are bullish on the year ahead.

The office market is often a barometer of the overall health of companies and the economy. At the end of the third quarter of 2014, the local office of Colliers International reported the office vacancy rate across the Twin Cities at 14.2 percent, lower than at any point since 2006, according to Colliers statistics.

But the comeback has been incremental. In the office market, the outlook for 2015 calls for continued slow and steady absorption of vacant space.

“Overall it’s been slow and steady, kind of a methodical absorption. Companies are still looking to right-size,” says Jim Damiani, a veteran Twin Cities office broker and senior vice president with the local office of Colliers International. “We’re not seeing any real large growth. There’s been some: Code 42 and groups like that.” The fast-growing Code 42, a data protection and backup company, is looking to expand to the planned Mozaic East office building in the Uptown area of south Minneapolis in 2016. The company currently leases space in Riverplace, just across the river from downtown Minneapolis.

Damiani says that top-shelf Class A space is tough to find in the most popular office markets, including along Nicollet Mall in downtown Minneapolis, the North Loop neighborhood of Minneapolis and along the Interstate 394 corridor to the west of Minneapolis.

But Damiani notes that some build-to-suit projects in the pipeline for specific tenants will boost vacancy in 2016, when the new buildings open and companies move out of other buildings into new spaces.

The bottom line for many tenants is keeping their options open.

Damiani says that such options are more prevalent in today’s real estate market, because business owners don’t want their business to be controlled by lease terms. But Damiani notes that established tenants with solid credit are in a better negotiating position to secure such options than startup companies with no track record.

Another market trend: Damiani says that he’s increasingly seeing companies survey employees about what they would like to see in the company’s office space.

“It’s a great way to retain top talent if you give them a say,” says Damiani.

Amid the ongoing apartment-building boom centered in downtown Minneapolis, Damiani says that proximity to housing can be an important factor for office tenants.

“I’ve done a few deals downtown where they’re excited about the housing in and about downtown for their employees. It’s definitely on the radar screen, more so now than it has been in the past.”

In mid-November, Bloomington-based United Properties unveiled plans for a new Class A office building in the North Loop, an area that includes Target Field and many new apartment buildings. The developer plans to press ahead with the 240,000-square-foot building on a speculative basis (i.e., with no leases in hand).

When developers are willing to build spec, it’s a sign of the market’s health.

“We have literally leased up all the space we have in the North Loop,” says Bill Katter, executive vice president of United Properties.

The 270,131-square-foot Ford Center building is now 99 percent leased, and the 112,645-square-foot Loose-Wiles Building will soon be 98.5 percent leased. Both are office buildings that United Properties renovated in the North Loop area, Katter says.

“We do plan to go spec on this,” Katter says of plans for the new building, which will be called Target Field Station Center. “Office is nearing the point of full recovery.”

He adds that it’s possible that United Properties could have some leases in place by the time construction starts in fall 2015. Completion is set for late 2016 or early 2017. Another developer, Houston-based Hines, also has pitched a speculative office project in the North Loop area, the 210,000-square-foot T3 building.

In the current climate, United Properties also has been busy with local industrial development projects.

Industrial is clearly in full recovery, says Katter. “I think you’ll see some very large deals getting done in 2015, some of the largest deals yet in this market.”

The industrial market remains the busiest commercial product type. A third-quarter 2014 market report from Colliers International tallied 3.1 million square feet of industrial projects under construction across the metro and found an industrial vacancy rate of 8.8 percent, the lowest since 2007.

“There’s no question that the market is better than it was a year or two ago,” says Scott Moe, vice president of leasing and development for Minneapolis-based CSM Corp., which is developing speculative projects in both Rogers and Brooklyn Park. “When you’ve been hitting your thumb with a hammer, it feels really great when you stop.” Moe expects to see more industrial development in 2015.

“I would imagine that there’s another wave of spec development sitting in the wings,” says Moe. “I would think there are more and more guys warming up their bulldozers.” While the industrial market has improved, it still faces challenges.

“[Rental] rates are just barely good enough to pull off speculative development. I wouldn’t say the golden days are back again,” says Moe. “I think that it’s definitely cause for optimism, but we’ve still got some work to do.”

Real estate remains a cyclical business. As he looks to the apartment building boom, Katter sounds a note of caution for developers that still have projects in the pipeline. It will be a “year of reckoning for people who are still in development or leasing on their multifamily [projects],” he explains.

One of the biggest real estate stories of 2014 was the sale of the Normandale Lake Office Park in Bloomington, which sold for approximately $369 million in October. The deal for the five-building, 1.7 million-square-foot office park set a record as the most expensive property sale ever in the Twin Cities.

An investment group led by real estate legend Sam Zell had acquired Normandale Lake Office Park for about $265 million in 2012. The gain of more than $100 million after just two years of holding the property signals the strong recovery that’s underway for investment property sales.

“It was an investor that made a great call at a time when they didn’t have much competition,” says Steve Buss, who leads the institutional properties team for the local office of CBRE Capital Markets.

The last high point for the investment sales market ran from 2005 to 2007, Buss says. “These windows open up for two to three years.”

Buss and his team brokered another one of the year’s biggest sales, the $164.5 million sale of 50 S. 10th, a downtown Minneapolis building where Target Corp. leases all of the office space. A German investment fund bought the property for a price that worked out to $330 per square foot, which Buss notes is a record price for a local property on a per-square-foot basis.

“We had a lot of interest from foreign capital,” recalls Buss of the high-profile deal.

Looking at the trends and the deals already in the pipeline, Buss notes that savvy investors who bought properties during the slump of 2009 to 2011 and now have stable properties are likely to consider selling those assets.

Buss expects more total deals with a higher total sales volume in 2015. “It should be a bigger year,” he says.