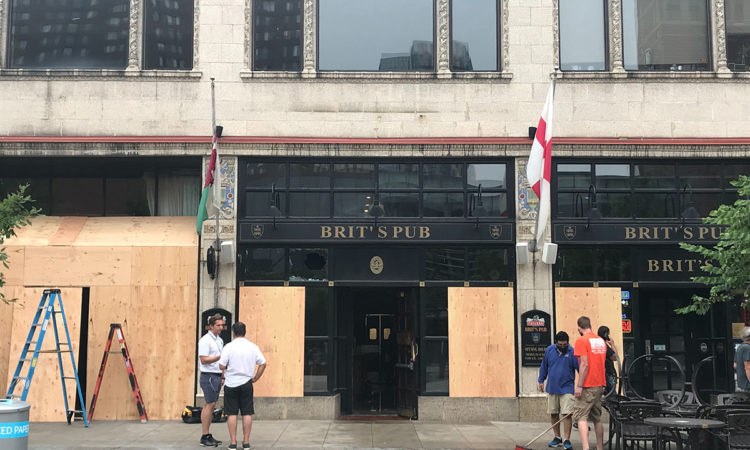 Plans for repairing and reopening Brit’s Pub are unclear at the moment. Peter Diamond

The powder keg of relations between the Minneapolis Police Department and the city’s Black community exploded again on Wednesday night. The police were in pursuit of a suspect in a homicide earlier in the day on Wednesday. The suspect, a Black man, shot himself in the head on the Nicollet Mall at about 6 p.m. in a public suicide. False reports quickly spread that the police had shot and killed the man.

What followed was another harrowing night of window smashing and looting of numerous downtown businesses including Target, Nordstrom Rack, The News Room restaurant, Haskell’s liquor store and others. At some point, Brit’s Pub was set on fire.

“We’ve got one side of the first level of the building that caught on fire and thankfully it was contained, but the building just got trashed,” said Kam Talebi, CEO of Kaskaid Hospitality, which acquired Brit’s Pub in June 2019.

“Looters got in and went through everything,” said Talebi. “Computers, TVs, broke everything, broke doors, got into the office…for a couple of hours they had a ball and then decided to set the place on fire.”

“I just don’t think that the police had enough resources to deal with what was happening,” said Talebi. Businesses outside of downtown also sustained damage and looting.

A Caribou Coffee location next to Brit’s Pub was also damaged.

Caribou issued a statement addressing steps it is taking in the aftermath of the violence: “We experienced damage to our Caribou Coffee location at 11th and Nicollet last night. The location will be closed until further notice as our team assesses next steps. We are proactively adjusting hours at surrounding Caribou Coffee locations where needed, to ensure the safety of our team members and guests.”

At a late morning press conference, Frey announced another curfew for tonight starting at 8 p.m. and running until 6 a.m. on Friday morning. Minneapolis Police Chief Medaria Arradondo said that approximately 50 people were arrested Wednesday night. Minneapolis Fire Chief John Fruetel said that there were four fires last night, including a blaze at a Walgreens location at 43rd Street and Chicago Avenue, which is nowhere near downtown. Meanwhile, in a Thursday afternoon statement, Hennepin County Sheriff David Hutchinson said a total of 132 people were arrested by “multiple agencies.”

Steve Cramer, president and CEO of the Minneapolis Downtown Council, arrived in the central business district at about 6:45 a.m. this morning.

“As I was driving in this morning the first thing I saw were all the construction workers walking to various job sites downtown. … I saw a bunch of downtown residents walking their dogs, then I saw a light-rail train running,” said Cramer. “It was a blow last night, but this is a resilient downtown.”

In the wake of the killing of George Floyd by the Minneapolis Police in May, there has been intense debate about what the role of the police should be in the city. Some have called for “defunding” the department.

“We should have community outreach and we should have mental health co-responders and all of the complementary strategies that people talk about,” said Cramer. “But at the core when you have a situation like last night … you need law enforcement.”

Signs posted on Target’s downtown store indicated that it would be open from noon to 6 p.m. today.

“Last night, a group of people entered the Target store on Nicollet Mall, stole merchandise and damaged several parts of the store,” the company said in a statement. “Our first priority was keeping our team members and guests safe and no one was injured in the building. We closed the store early, are inspecting the damage and plan to reopen the store later today. Additionally, overnight people broke into the Target stores in Uptown and Dinkytown and both sustained minor property damage. Team members are working quickly to clean up the stores and both will reopen this morning. Finally, there was also property damage at our headquarters building on 10th Street. External windows were smashed and the Minneapolis Fire Department was called after a small group of people broke into the basement mailroom and started a fire. Most of our headquarters team members are already working from home and we’ve asked the remainder to stay home today while the damage is repaired.”

Retail spaces in the IDS Center were closed on Thursday.

Plans for repairing and reopening Brit’s Pub are unclear at the moment.

“As restauranteurs, there’s already plenty of challenges to deal with…I just don’t know,” said Talebi. “We certainly will look to bring it back, I don’t know how long it’s going to take…you have so many unknown variables…I don’t know when I’m opening up here.”

Talebi noted that there’s not much incentive for downtown restaurant operators to be in business in the current climate of the pandemic economy.

“There’s no office [workers], there’s no shows, there’s no sports, and everybody fears coming downtown,” said Talebi. “So I’d like somebody to tell me why I should open up.”