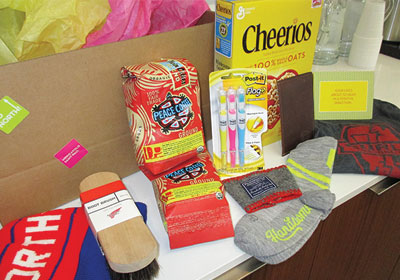 Can A Regional Initiative Make Minnesota More Welcoming To Outsiders?

A partnership of more than 50 regional organizations, “Make It. MSP” is aimed at retaining and recruiting workers. Among its initiatives: an effort to make natives more open to those who weren't born here.
October 24, 2015

When Twin Cities business and community leaders worry about something they call “social inclusion,” it’s really more economic than societal.

It’s not that they don’t want to encourage current residents to be more-welcoming of newcomers. It’s just that they fear that if the region continues to have a reputation of not embracing transplants — a reality more than a reputation, say many of those newcomers — its long-term economic health will suffer.

The reason is the numbers. Demographers are warning that if the region is to fill the jobs it needs to fill over the coming decades, it can’t do it with native born residents. According to the Minnesota State Demographic Center, by 2040, the number of births in the state will be surpassed by the number of deaths. That’s a historic and demographic first that isn’t good news for any economy.

Toss in the retirements of baby boomers and the numbers mean Minnesota needs migrants — from other states and from other nations.

“We need a sense of urgency because we could be 100,000 workers short by 2020,” said Michael Langley, the CEO of the regional economic development partnership called Greater MSP. “So even if we educate and upskill every one of our current workers and potential workers, we’re not going to have enough talent over the next 10 years and beyond.”

That means attraction of migrants from within the country and without is as important as talent development for businesses, non-profits and educational institutions, he said.

Social inclusion is just one of the proposed responses by a new initiative rolled out Tuesday. Dubbed “Make It. MSP,” the program is a partnership of more than 50 regional organizations, including some of the largest corporations, nonprofits and educational institutions in the Twin Cities.

Other efforts to both attract and retain talented workers are to raise the region’s profile around the country and helping corporate and nonprofit recruiters woo job candidates. An interactive website will show off the region as a good place to live and work and includes a job-search portal. The project even includes a care package of region-made products that recruiters can arrange to have sent to prospects. (Think Cheerios, Peace Coffee, a Red Wing shoe brush, a highlighter with Post-It notes attached, Faribault socks and a “NORTH” stocking cap.)

Douglas Baker, the CEO of Ecolab and co-chair of Greater MSP’s talent initiative, said the region must first appeal to talented people as a good place to live before it can try to sell them that it is also a good place to work.

“Place is becoming increasingly important,” Baker said at the roll out of “Make It. MSP” in St. Paul. “When I got out of college, you went where the jobs are. Today, people are going to communities and then looking for jobs.” He then repeated a familiar phrase: “It’s very difficult to get people to move to Minneapolis-St. Paul; it’s impossible to get them to leave.”

An analysis by University of Minnesota management professor Myles Shaver indicates the region is No. 19 among the top 25 markets in the nation in attracting young professionals, but is No. 1 in retaining them. But Shaver’s study shows the region doesn’t do as well at retaining people of color, where it ranks 14th.

And the otherwise impressive retention statistic is helped by the fact that many of those who stay here started here in the first place. Census data show that 72 percent of Minnesotans are natives. (That is not high among midwestern and southern states, but it is much higher than states the region like to compare itself to, such as Oregon with 46 percent, Colorado with 42 percent and Washington with 47 percent).

“The data show that we can do a better job at welcoming and onboarding newcomers,” said Peter Frosch, vice president of strategic partnerships at Greater MSP.

Most of the other parts of the initiative would be familiar to corporate recruiters — pretty pictures and videos, job boards and even welcome baskets. But having to create a corporate and community response to something as personal as getting locals to befriend transplants — to simply invite them to dinner sometime — isn’t part of the typical recruitment and retention campaign.

Numbers show the workforce problem
The labor estimates by the demographic center are stark. A state that needs a net gain of migrants to compensate for declining natural growth isn’t doing so well with migration from other states. After a decade of positive numbers — that is, more people moved into Minnesota from other states than moved out — the trends changed in 2001.

“Recent estimates put domestic net losses at approximately 7,000 to 12,000 per year,” reported the demographic center in January. The bulk of the losses come in the age group that most economists and most business leaders want to attract: millennials. In the 18-to-24 age group, Minnesota suffers a net loss of 9,300 people per year, mostly due to the fact that more students leave the state for college elsewhere than move in to attend Minnesota schools.

“In fact, two-thirds of Minnesota’s total annual domestic net loss is due to Minnesota students leaving for higher education, and far fewer return in the post-college years,” the report “Minnesota On The Move” stated. “Thus, retaining more of our college-bound young adults at in-state institutions may be a key strategy to long-term population retention and labor force development.”

The factor that has kept Minnesota’s population growing is international migration: from foreign students, work VISA holders, refugees and other other immigrants, the report stated. In a previous report titled “In The Shadow Of The Boomers,” the demographic center made recommendations that anticipated the Greater MSP task force. It called on state officials as well as community and business leaders to “expand state-level efforts to make Minnesota more attractive to domestic migrants and international immigrants,” welcoming of these groups in the workplace as well as at the community and neighbor level.

While federal immigration policy changes are not part of the “Make It. MSP” initiative, Langley said Tuesday that is is an issue that must be addressed, especially for highly trained and educated workers.

Is organized inclusion possible?
Can a regional organization like Greater MSP really do anything to counteract the ill-effects of Minnesota Nice?

Langley said yes. “We know, both episodically and when you sort the data that single folks who don’t have kids, who don’t have connections to schools and recreational activities, their retention rates are lower,” he said. “So, based on the data, that is the factor that is most important in terms of retention, that feeling of connectedness.

“That’s what the research tells us,” he said. “If we can get people connected early and quickly our chances of retaining them for the long term are much better.”

Baker said regional companies have been aware of the problem for years and have tried to forge a response. New employees with families, especially those with children in school, have an easier time. “You’re magically put into some sort of network. It’s either arts that the kids are in, sports that they’re in and you end up being part of the community like in a week. I’m being a little facetious, but not really.”

Frosch pointed to a subgroup of “Make It. MSP” — the Makers, which is made up of groups already working to bring newcomers into networks such as technology, the arts and emerging leaders. It includes Saint Paul Hello, which organizes monthly welcome events for new arrivals that includes a gift of a (faux) fur-lined hat.

“The Makers are a coalition of groups– cities, nonprofits, universities, community organizations, companies, and others – that are upping their collaboration game,” says the Make It. MSP website. “Together, we are aligning our missions around a shared commitment to making MSP even more inclusive, welcoming, innovative, and globally connected.”

At a Tuesday evening event marking the initiative, one wall was to become “The Wall of Engagement” where people can sign up to do things to help transplants, Frosch said. “And one of the things people can do is make a commitment to invite someone over to dinner.”

Jerilyn Veldof and Corey Bonnema are human resources trainers and consultants who talk about dealing with Minnesota Nice. The first problem, they say,  is convincing Minnesotans that the issue is real, that it is a problem — and that it is their problem.

“We’ve never positioned it as an economic imperative but I think it’s gonna impact Minnesota businesses that so many people aren’t particularly happy,” Bonnema said. Veldof, a transplant from New Jersey, said the first reaction of new arrivals is that there must be something wrong with them, that it is their fault that they are having more trouble assimilating than they did in previous jobs in previous cities. Then, once they see that others face the same issues, they blame Minnesotans. Finally, they adjust as best they can, “if they make it that long.”

Bonnema said the fact that so many people in Minnesota where born in the state as was he means many don’t know what it is like to be the newcomer. The hardest transitions, they say, are among singles, those in groups that are not well represented, such as African Americans and the LGBT community, and what Veldof terms the “trailing spouse,” who move so a spouse can take a job.

They agreed that there are ways to overcome the reluctance of native Minnesotans to embrace newcomers. Veldof cited the efforts of companies like Ecolab, 3M, Target and Cargill to “systemize social interaction” through creating groups and events to “fill up people’s calendars.” For those not connected to a big company, she suggests groups like Break The Bubble,  “a professional networking organization and we're not a singles group,” that organizes events where people can meet possible friends.

Said Bonnema: “You can’t force people to get into social things but I tell them ‘you’re not being required to establish a lifelong friendship.’ ” That elusive dinner invitation is “a huge thing. My measure of success is if that happens more often.”

But both said they think successful transplants do a lot of the hard work themselves. Like Frank Alarcon who spoke at the Tuesday rollout. He moved to the Twin Cities a month ago after finishing a Peace Corps assignment in El Salvador. Alarcon spent months researching where he wanted to live and after choosing, spent time connecting with 100 locals over the internet. He now has a job and many connections.

Danielle Steer relocated from the San Francisco Bay Area and works for a coworking and event space. She has already been involved with other transplants and has organized a Thanksgiving dinner for newcomers who might otherwise be alone.

Said Veldof: “My most common advice is to find other transplants. You’ll do so much better.”