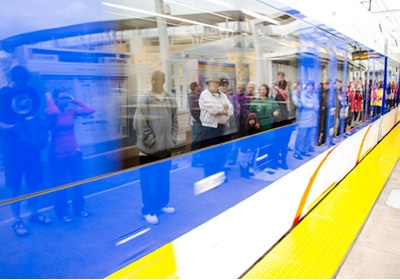 Cost estimates for the Bottineau light-rail line ballooned by nearly half a billion dollars, the Met Council announced. The total price tag is now at $1.48 billion.

The line, which would run would as an extension of the current METRO Blue Line from downtown Minneapolis to Brooklyn Park, is seeing the price jump because of the addition of a station on Plymouth Avenue and seven new bridges, extra supports needed through wetlands, soil remediation necessary along the line and inflation increases. Construction also requires some work to be done to Olson Avenue’s roadway and utility relocation, according to the Star Tribune.

Officials were quick to caution against outcry, noting that such an increase is typical and expected when moving beyond the earliest engineering estimates—engineering and environmental work is now at 15 percent completion.

“There might be an immediate reaction to the number,” Met Council chairman Adam Duininck said. “But I do think as people process the information and talk about the value of the line, it will make the case for itself.”

The regional planning body is still reeling from a fight earlier this year, when it was revealed that the Southwest LRT project, an extension of the Green Line running from downtown Minneapolis to Eden Prairie, jumped from $1.7 billion to over $2 billion. That prompted an outcry from Gov. Mark Dayton, legislatures and critics of both public transportation and the Met Council. Through cuts—including stations in Eden Prairie—and fresh funding from cities along the line, the price was pared down to under $1.8 billion.

The November issue of TCB reports on the future of Southwest Transit’s express bus service with the coming of the Green Line extension that could eat into ridership.