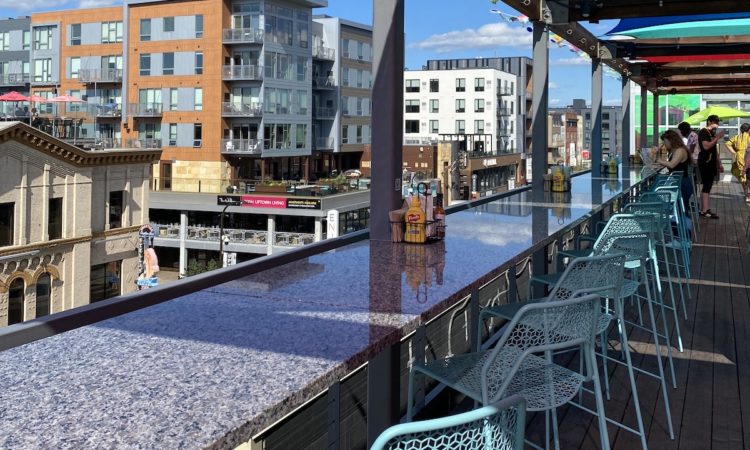 The rooftop bar of Arts + Rec at Seven Points in Uptown.

Just in time for the Uptown Art Fair, Arts + Rec opens its rooftop bar and restaurant with a first-level mini-golf concept set to open this fall.
By Allison Kaplan
August 04, 2022

Behind the art displays and lemonade stands that will activate Lake and Hennepin in Minneapolis for this weekend’s Uptown Art Fair stands a business district in an unprecedented state of transition. Commercial buildings at three of the four corners of one of the city’s most prominent intersections stand vacant. The new entrance to Seven Points at the southwest corner of the intersection is so discreet that the shopping center might appear on first glance, to be closed. And beyond the new Chase Bank branch in the front corner spot that was long home to restaurants—and a few other determined tenants—the shopping center is a quiet shadow of itself inside, too. 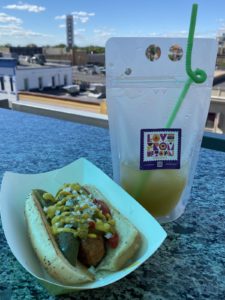 But development is underway on a restaurant and entertainment venue that could get consumers excited about venturing into Seven Points (formerly Calhoun Square) once again. And this weekend, art fair visitors will get a small taste of what’s to come as Arts + Rec Uptown debuts its new rooftop bar and restaurant serving “gastrofair”—elevated fair food like Dorito-crusted cod, fried pickles, and breakfast waffle dogs along with craft cocktails, local beers, boozy popsicles, and non-alcoholic options. It’s phase one of a project that will become one of Seven Point’s largest tenants, occupying 20,000 square feet on both rooftop and first floor, where a restaurant, bar, and mini golf entertainment concept is currently under construction with plans to open this fall. Both spaces will be decorated with original works for numerous local artists. The rooftop features murals by Martzia Thometz and Bo Young An and metal sculptures by Allen Christian who designs under then name House of Balls.

“At Arts + Rec Uptown, we’re creating a food and cocktail destination in the heart of the uptown neighborhood to highlight the amazing talent of our local artists,” said Ben Graves, CEO of Graves Hospitality, which is overseeing the concept, development, and management of Arts + Rec. The parent company, Arts + Rec, is led by CEO Joel Hernandez and includes local creatives like Jennifer and Chris Pennington who designed Can Can Wonderland. Their motto: “Make better fun.”

Graves has a vested interest in restoring Uptown as a creative hub and regional destination. The Hospitality company’s expansive portfolio includes the Tasting Room on 31st Street, near Ann Kim’s Sooki + Mimi restaurant and the Moxy Minneapolis Hotel, with its two lobby bars.

At a time when many Uptown property owners are struggling to sign leases and focusing more on neighborhood services than the national brands that have fled the area, the Arts + Rec team believes its venue can become a neighborhood magnet. (Apartments are planned for the western portion of the Seven Points property.)

“Art and artists spark change and create energy and excitement in a community,” Graves said.

Reservations for the Arts + Rec rooftop are online now at artsandrecuptown.com.