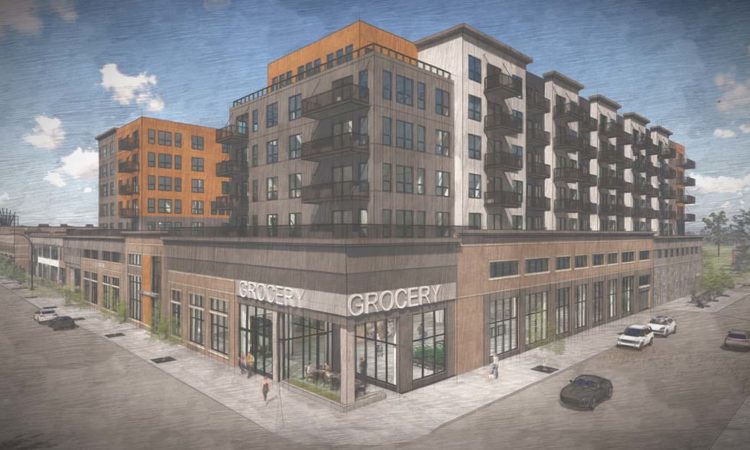 Redevelopment of the former Calhoun Square to begin this year.
By Adam Platt
February 18, 2022

Plans for the long-awaited redevelopment of the former Calhoun Square have finally been revealed. Owner Northpond Partners of Chicago has partnered with Twin Cities-based Doran Companies to build 264 market-rate apartments on the site. The structures will occupy the northeast corner of the 31st and Hennepin intersection, replacing CB2 and the southern periphery of the Seven Points complex.

“I grew up in Minneapolis and I’m proud Doran is helping to execute Northpond’s vision for Seven Points,” said Anne Behrendt, Doran CEO and Principal, in a prepared statement.

Northpond says it has also executed an MOU with an unnamed nonprofit developer to build an affordable housing structure on the long-vacant lot immediately to the east of Seven Points along Lake Street, with an anticipated construction start date of 2024.

The Chicago developer also teased plans for new restaurants and a grocery store for the complex but was unwilling to release details at press time. Previously Northpond announced it had signed Can Can Wonderland owner Arts and Rec to develop an entertainment venue in the complex to open this year.

The residential development will necessitate the closure of Chicago-based furniture retailer CB2 in April. A spokesperson for CB2 says the company has no immediate plans to reopen in the Twin Cities.

In an interview earlier this winter for a TCB feature on Uptown’s retail problems, Sam Ankin, managing principal of Northpond, telegraphed his goals for new Seven Points tenants. “We’re looking for neighborhood-first uses that generate daily visits,” he said. “We want to add density, multifamily residential, we want to make it interactive to the streets.”