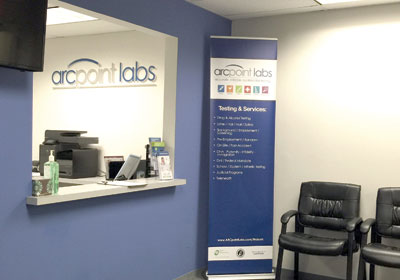 Greenville, South Carolina-based ARCpoint Labs is expanding in the Twin Cities with three new locations set to open. The core business of ARCpoint Labs is drug and alcohol testing. ARCpoint’s first metro location opened in Golden Valley in December 2012. New locations are opening within the next month in Edina and Eden Prairie; another franchisee is scouting locations in Bloomington and hopes to open by the end of the year.

Felix Mirando, founder and CEO of ARCpoint Labs, says that growing demand for its services is driving the expansion. “Minneapolis is a very vibrant area and there’s a lot of growth there,” he said.

Mirando started ARCpoint in 1998 and began franchising the concept in 2005. There are currently more than 90 locations across the U.S.; planned openings will bring the tally to 100 labs in the next few months. Except for two locations owned by Mirando, all of the other ARCpoint facilities are run by franchisees.

Mirando said that ARCpoint began with drug and alcohol testing, but has been diversifying into other service areas, such as wellness screenings for corporate clients.

The increased prevalence of prescription painkiller abuse is also leading to an uptick in tests screening for those drugs. The Centers for Disease Control and Prevention reported that overdose deaths related to prescription opioids in the U.S. quadrupled from 1999 to 2014. According to the CDC, more than 14,000 people died in 2014 from overdoses involving prescription opioids.

“Prescription drug abuse is an epidemic. It’s one of the fastest growing segments in the industry,” said Mirando.

Mirando says that ARCpoint locations are collection sites; the company has national contracts with LabCorp and Quest Diagnostics, firms that do the actual testing and diagnostics work.

Franchisee Bill Rodgers will open an ARCpoint location in Eden Prairie on May 25. He sees growing demand for its services.

“It’s primarily business to business, but the consumer market is growing,” said Rodgers, noting the increase of DNA testing.

Another local franchisee, Emanuel Sas, is preparing to open an Edina location in early June. Sas has a background as a pharmacist and previously ran an independent pharmacy location in the Las Vegas area, which he sold to Walgreens in 2014. Sas says that he was drawn to the concept by the expanding range of services that ARCpoint can offer, such as wellness screenings.

“It just has a lot of different things that you can do within the business model,” said Sas.

Mirando has big plans for ARCpoint Labs and envisions having 275 locations by 2020.