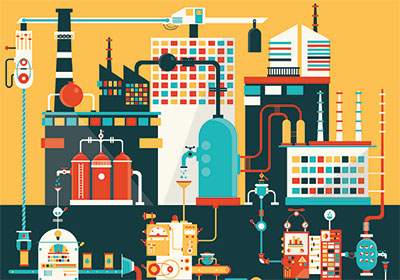 What makes Minnesota’s manufacturing base stand out from its neighbors’ and the rest of the nation?

It’s the diversity of its manufacturers, small-town work ethic, urban cachet, embrace of technology, history of innovation, location, and its academic and natural resources.

Put the words “Minnesota” and “manufacturing” together, and giants come to mind: 3M, General Mills, Hormel Foods, Medtronic, Polaris and others, including the jolly green one that welcomes travelers to Le Sueur as a towering sign.

The Iron Range might have become a rust belt if not for University of Minnesota researchers who figured out how to turn taconite into a marketable product.

“Even taconite is a technology-rich form of manufacturing, and based on Minnesota innovation,” says Bill Blazar, interim president of the Minnesota Chamber of Commerce. “The reason that Minnesota manufacturing is as healthy as it is today is that it’s innovative and it’s made to order.”

Other reasons include Minnesota’s proximity to Canada, which fuels exports; the state’s medical technology industry, which employs more than 35,000; and its agricultural base. Minnesota farms feed people, animals and a food-processing industry that ranges from companies that prepare fruits, vegetables, hogs and poultry for sale to companies that make parts for food-packaging machines.

Although its manufacturing giants grab attention, Minnesota’s small manufacturers employ more people overall, stay in families for generations, and are no strangers to innovation.

Consider Bolger Inc. Founded by John and Genevieve Bolger in 1934, the Minneapolis company was a traditional printer shop until about a decade ago, when the couple’s son, dik, realized that medical patient privacy regulations could be a gold mine.

The federal Health Insurance Portability and Accountability Act of 1996 (HIPAA) went into effect in August of that year, resulting in strict regulation to keep medical records confidential.

Somebody had to print all those documents in compliance with federal law. Bolger brought in computer application developers, bought a second plant and dedicated it to the privacy printing business.

“It’s the same thing that has compelled us throughout the history of the company,” explains Bolger, who is CEO. (His brother, Charlie, is CFO.) “We listened to where the pain was with our customers and worked to alleviate that and provide solutions in that world.”

Eleven application developers write programs that keep clients’ private information flowing, save them money and give them the security compliance required by the federal government, according to Bolger. Those clients include Blue Cross and Blue Shield organizations across the country, other insurers and health care organizations whose identities he declined to disclose.

Eight years ago, Bolger landed privacy-regulated business from the financial industry. More recently, the company started doing secure printing for retailers. The privacy part of the business generates about $10 million a year, one-third of annual revenue, Bolger reports. The company is growing at a pace of 15 percent a year, he says.

Security is tight at the second plant, located in an industrial area of northeast Minneapolis. Everyone must wear badges that indicate their security level. Employees wheel printed materials, locked in rolling cages, from one department to the next.

“We’ve hired down there, but the real focus for me has been to create less touches and to automate it more,” Bolger says. “From a manufacturing perspective, there are a lot of opportunities to streamline it.”

The other plant is devoted to traditional printing. Racks hung outside workers’ cubicles display colorful, glossy advertising materials for high-end clients in Manhattan. A wall display holds samples of college alumni magazines and other clients’ brochures. 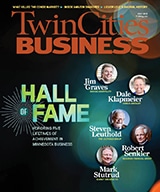 Beyond the offices, a cavernous room holds a printer the length of two school buses, and several smaller ones.

While Bolger wants to automate for efficiency, many manufacturers have turned to automation out of desperation. The nationwide skilled-labor shortage has a variety of causes, according to local, regional and national experts:

“In terms of employee recruitment, I think every state has got the same challenge that we have,” says Bob Kill, president and CEO of Enterprise Minnesota, a manufacturing efficiency consultancy that studies the industry. “The more rural a state is, the more challenging it is.”

Ever-resourceful Minnesotans are coming up with solutions. Traci Tapani, co-president with her sister, Lori, runs Wyoming Machine in Stacy, Minn. The sisters left successful careers in finance in 1994 to run their parents’ precision sheet-metal company. They have built such a reputation for speaking out about the lack of skilled labor in manufacturing that Tapani recently attended a White House conference to discuss her ideas on “upskilling” the workforce.

Wyoming Machine employs 56. When the company had a job opening last year, the leadership realized that someone accustomed to working with processes might be a good fit. They hired Danielle Guy, 23, who had spent the previous four years managing a McDonald’s.

“She did have a lot to offer,” Traci Tapani says. “She just needed more skills.”

Guy is obtaining those skills on the job and from classes at Pine Technical and Community College in Pine City. She takes the classes in the company break room, via interactive TV. A U.S. Department of Labor grant is paying her tuition.

Guy can receive a national certification after completing each of the series’ four classes on manufacturing basics, according to Heidi Braun, contract training program manager at the college. Companies will hire students with these credentials on the spot, Braun says.

The program has trained 1,379 workers since October 2014 through four post-secondary institutions, she notes.

The AFL-CIO recently began working with a handful of Minnesota manufacturers on an apprenticeship program that the union and business associations developed in Wisconsin.

Funded by a different federal grant, the Industrial Manufacturing Technician program provides about 2,800 hours of on-the-job training and 300 hours of coursework, taught in the workplace by technical college instructors.

“This program has been a great partnership between the unions and employers,” adds Todd Dahlstrom, organizing and growth director for the Minnesota AFL-CIO. “It really has increased the loyalty and morale in the plants where this program is up and running.”

One of Minnesota’s oldest manufacturers, publicly traded Tennant Co. works closely with Dunwoody Institute in Minneapolis and other technical colleges to train employees, according to company spokesperson Kathryn Lovik. The industrial cleaning equipment manufacturer also used current and retired employees to train the roughly 65 employees it hired in 2014.

The 145-year-old company headquartered in Golden Valley continues to innovate. It recently added advanced cleaning technology to its machines, some the size of Zambonis. It has launched ec-H2O NanoClean, a technology that electrically converts water into “nanobubbles” that can clean as well as or better than chemicals, Lovik says.

The company sells within the U.S. and exports to Canada, Europe and Asia. It employs 2,800 worldwide, with other plants in Kentucky, the Netherlands, the United Kingdom, Brazil and China.

Tennant is one of 74 Minnesota manufacturers that employ more than 500, according to Kill.

Besides the skilled-labor shortage, Minnesota manufacturers face other challenges, according to the experts. Minnesota levies higher business taxes than some other states do, needs more road and highway funding, and must conquer the achievement gap in education, they say.

Professor Ernie Goss of Creighton University in Omaha, Neb., a regional economist, argues that employers and government should siphon some of the money provided to four-year schools and funnel it to technical and community colleges to help close that gap.

Goss conducts monthly surveys of Upper Midwest manufacturers, value-added producers and rural bankers. He thinks Minnesota’s large food processors have recovered well from the recession, while rural manufacturers may lose some of the jobs they added due to falling energy and agricultural prices.

In a June 1 report released by Goss, he noted that “firms linked to energy and agriculture are experiencing pullbacks in economic activity” in a nine-state mid-America region.

“Minnesota’s economy has expanded in 2015, but at a slower pace than for the same time period in 2014,” Goss says.

“Our surveys over the past several months point to even slower, but positive, growth in the months ahead for the state,” Goss adds. “Despite the strong dollar making Minnesota goods less competitively priced abroad, durable goods manufacturers, including metal producers, expanded for May and for 2015. Growth for the heavy manufacturing, or durable goods, will slow in the months ahead, spilling over into the broader state economy.”

Minnesota’s high-tech, computer and electronic component manufacturers, which together employ about 45,000, set it apart from other states, particularly its neighbors, Goss says. Chad Moudray, chief economist for the National Association of Manufacturers, calls the strong dollar a “huge headwind” for exporters.

Obama has argued that the pact, which would ease trade with Asian countries, would lead to thousands of new American manufacturing jobs.

Now the labor shortage is taking the spotlight, as manufacturers realize they can’t find the employees they need.

Although many Minnesotans are working hard on the problem, “there are just as many who are throwing their hands up and saying, ‘There’s nobody available,’ ” Tapani says.

The Tapani sisters want others to know that owners of companies like theirs are more than manufacturers. They’re entrepreneurs.

“We’re problem solvers,” Traci Tapani says. “An entrepreneur is not going to say, ‘I can’t grow my company because I can’t find anybody.’ We’ll try anything.”

Blazar, of the state chamber, cited companies such as Bolger as emblematic of Minnesota ingenuity.

“The printing industry, not just because of the recession, but because of the changes in the usage of printing and paper, that industry is sort of a shadow of its former self,” Blazar says. But “thanks to innovation and creativity, a lot of those companies are finding new futures, and that’s Minnesota manufacturing.”

He argues that the expanding global economy will be critical to the future of Minnesota’s manufacturing base. He cites the growth of the middle class in India and Mexico as a reason for optimism.

“When a country gets a middle class, people start going to the grocery store,” Blazar says. “We make a lot of stuff that gets sold in grocery stores.”