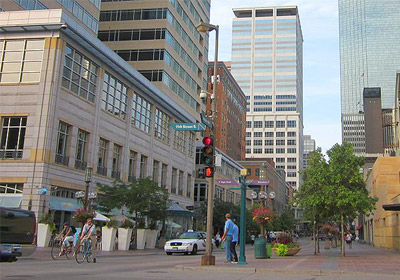 With Minnesota Orchestra Lockout Over, Businesses And City Tally Losses

Michelle Hummer’s 474-day nightmare came to an end Tuesday evening. As the general manager of MASA, a Mexican eatery located down the street from the Minnesota Orchestra Hall in downtown Minneapolis, she watched the restaurant suffer “significant” losses as the performance hall sat dark for more than a year during a historic lockout.

But news broke that musicians and the Minnesota Orchestral Association had finally reached an agreement and ratified a three-year contract that kicks in February 1. With concerts likely to start back up shortly after that, Hummer says she can “already feel the life back in the restaurant.”

“We feel like we can look across the street and have hope,” she said. “It’s nice knowing we are going to have guests who aren’t just protesters.”

other businesses near Orchestra Hall are thrilled to see the end of the lockout, a drawn-out conflict that had a ripple effect throughout the neighborhood. The city of Minneapolis estimates it lost $2.9 million in parking, dining and other business during the suspended 2013 orchestra season. That includes about $414,000 in parking fees–an Orchestra Hall attendee pays an average of $10 to park during a performance in nearby ramps–and nearly $900,000 in anticipated food and beverage rental at the Minneapolis Convention Center down the street.

The Minnesota Orchestra’s own research says about half of people who attend a performance also dine in downtown Minneapolis. About 30 percent of Orchestra Hall patrons attend matinee performances and spend an average of about $40 at a restaurant. Those attending an evening show at the hall, which is an overwhelming majority of visitors, spend an average of $80 an evening, according to the city.

“It’s a huge relief to have this behind us,” said Downtown Council CEO Steve Cramer, who said downtown businesses were anxious to see the lockout end. “Orchestra Hall is a statewide asset but they play in downtown Minneapolis. The orchestra was clearly one of those unique experiences in downtown that you can’t find anywhere else, and it’s just great to see the lights go back on.”

During the lockout, Hummer’s restaurant had to adapt. Staff was cut back to save costs and the restaurant introduced new date night specials and happy hour deals. They took to social media to spread the word and targeted nearby businesses to increase traffic.

“You are operating with the promise that if you just hold on tight a little longer it will eventually open up again. Orchestra Hall is really the heartbeat of 11th Avenue and Nicollet,” Hummer said. “You take the heartbeat out of an intersection like that and everything is different. The traffic is different; the customers are different. You have to think outside of the box.”

Vince Vito, the director of sales and marketing at the nearby Hyatt Regency Minneapolis Hotel, says there’s no other place like Orchestra Hall in the entire state of Minnesota, and many people visit from far-flung regions of the state or from out of state and spend the night in Minneapolis.

“When you think about orchestras, it’s kind of a status thing for the downtown area and cities in general,” Vito said. “It’s going to be a positive thing for the hotel and it’s another shot in the arm for downtown.”