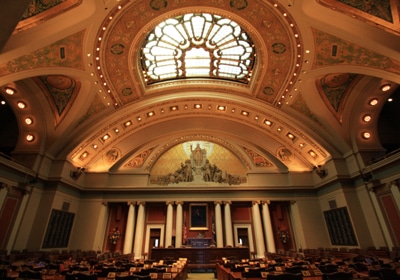 Peter Nelson of the Center for the American Experiment spoke to the state’s legislative body and believes change could happen, but maybe not this year.
April 23, 2016

Around the country, some states are experiencing the flight of wealthy individuals and companies leaving in favor of a more tax-friendly refuge. New Jersey representatives most recently called for a change in its tax structure following the announcement that billionaire hedge fund manager David Tepper would be departing the state for Florida. Similarly so, the wealth migration conversation has popped up in Connecticut after General Electric said it would shift its headquarters to Boston, in part to cut its property tax savings by upwards of $25 million.

Presently, the concern of wealth migration is heating up in Minnesota and was an issue featured in the April edition of Twin Cities Business. Accompanying the feature was data amassed by Peter Nelson, director of public policy for Golden Valley-based conservative think-tank Center for the American Experiment. Not long after state lawmakers reconvened for the 2016 legislative session last month, Nelson released a report on the issue and later spoke to Minnesota representatives at the state capitol regarding what changes to the law he believes must be made to ensure the state doesn’t lose out on billions of dollars.

As wealth migration and attractive tax structures become bigger talking points on legislative floors around the nation, Nelson discusses the intricacies of the issue in Minnesota and how he envisions state lawmakers will tackle wealth migration this session and in the future.

The tax bill is in conference committee and there is no guarantee that there is going to be a final agreement on whether to have the tax bill or not. If there’s no tax bill, then of course there is very little chance we’ll see any movement this year. As it could go, that tax bill may very well be rolled into some final deal. So at the end of session, if that tax bill is rolled into a final deal, there is an opportunity for the estate tax to become a part of that deal. The estate tax was heard in committees in the Senate and the House. It didn’t make it into the Senate’s final bill, but it’s definitely in the conference committee and it’s on the negotiating table right now. So when it comes to taxes that directly impact decisions to stay in Minnesota, that’s really the only tax that’s before the conference committee.

On why lawmakers may table the issue for the future

The fact is that Mark Dayton’s tax increase on the rich was one of the marquee issues he ran on when running for governor. So I just can’t see any sort of agreement to dial that back. I did a radio interview [yesterday] morning and the New Jersey issue came up and I also brought up the Connecticut issue. Governor Malloy in Connecticut has said these tax increases are not raising the revenue that we need; we need economic growth. And that’s exactly what Minnesota needs. We need economic growth if we want to fund the public programs we want to fund. Everyone should be concerned about the fact that these tax increases might ultimately lead to less revenue. For instance, when you look at the state’s revenue report that was just released, it’s hinting that [decreased revenue] might be the direction we are heading. We were nearly $70 million short on our revenue collections in March and February than what was projected in the February forecast.

On the chance lawmakers may reconvene on the issue

They can take up that conference committee at any time. Just because they did all that work last year, don’t think they aren’t doing anything right now. They did all the tax work last year in committees, they just have to talk this year. So the fact that there’s not that much going on in the tax committee this year does not speak to the fact that they are not taking these issues seriously. It's just the fact that they have to wait until the end to see where negotiations go before they can open that committee back up and implement whatever solution they come up with.

It will definitely become more of a political issue. I mean, how can it not be a political issue? Though I am concerned about that. The fact is these changes in migration are very much tied to the time we had tax increases, so this of course becomes linked to Governor Dayton and the DFL, and that instantly makes it political. And it also makes it harder to have a bipartisan conversation to agree on whether this is a problem. But now that we’ve got the data out there and the political dust is settling on the issue, hopefully we can have some deeper conversation with folks who care about these issues at the capitol.