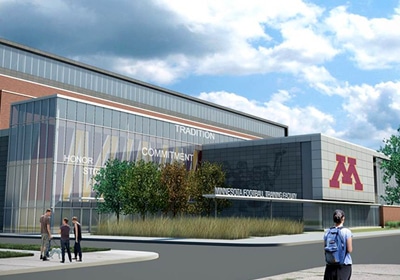 The Board of Regents' decision to delay a vote on the project means that the Gopher's track programs may finally be a priority.
September 11, 2015

Last week’s decision by the University of Minnesota Board of Regents to postpone a vote on the $190 million Athletics Village project until October might be annoying to football coach Jerry Kill and men’s basketball coach Richard Pitino. But for another coach — one who makes far less than either of them — the delay means something significant.

Steve Plasencia, a two-time U.S. Olympian at 10,000 meters and five-time All-American runner for the Gophers, coaches men’s track and cross country at Minnesota. He succeeded Roy Griak as cross country coach in 1996, and added head track duties in 2009 when Phil Lundin left for St. Olaf.  Plasencia coaches squads largely overlooked by Gopher fandom, except for a tight-knit group of devotees loyal to the charismatic Griak, who died in July at age 91.

For almost a decade, Plasencia watched sections of the 25-year-old track behind the Bierman Field Athletic Building crack, crumble and wear away. Passable for practice, the rubberized surface is too shabby for intercollegiate competition. The U hasn’t hosted a major meet since the 2003 Big Ten Championships, and nothing at all since 2009.  Even at the 2003 Big Tens, Marc Ryan, the senior associate athletics director who served as meet director, said he and his crew patched cracks and holes right through the final event.

The Athletics Village will be built where the track stands now. The Trustees won’t vote until the university picks the site of a new track, probably close to the East Bank campus. Ryan and Plasencia said multiple sites are being considered but declined to give details. The university is reportedly negotiating for one parcel with a 114-year-old grain elevator that needs to be torn down, but the Minneapolis Historic Preservation Commission opposes the demolition.

The delay shows Plasencia, women’s track director Matt Bingle, and the rest of the track and cross-country staffs that their programs finally have some priority — that the University cares.

“When they name a site, I’m going to be pretty choked up,” Plasencia said. “We’re really looking forward to being in a new home where we can showcase our sport a little bit, and kind of be the flagship for state track and field.”

Said Ryan, the former cross country coach at Macalester who handles logistics for Gophers track and field: “The best news is, the University of Minnesota track and field program is going to have a competition-level facility when this is all said and done.”

It certainly doesn’t now, at least outdoors. Bierman Track and Field Stadium, with a 10-lane, 400-meter track, was built in 1990 for the U.S. Olympic Festival at a cost of $1.6 million, with $270,000 kicked in by the state. Except for a touch-up and paint job before the 2003 Big Ten Championships, the track hasn’t been resurfaced since it opened.

But that’s not the only problem. Apartment buildings and homes were demolished to build the track, and longstanding issues with the soil left the track’s foundation unstable. A fissure bisects all 10 lanes on one of the turns. When it rains, puddles form in low-lying spots.  Ducks enjoy them.

“Our turn in the (conference championship) rotation has come around a couple of times since then,” Ryan said, “and we had to defer until we got a new facility in place.”

Minnesota planned to rebuilt the track from the ground up in 2009. But a university-wide building moratorium, prompted by the economic downturn, scuttled that as well as a new baseball field. Baseball Coach John Anderson eventually raised $7.5 million to renovate Siebert Field. Track generates little revenue and relies heavily on University funding, and the program never found a deep-pockets lead donor for the project.

Hamline University, meanwhile, rebuilt its track in 2005 with a state-of-the-art Mondo surface, the same used at the last four Olympic Games. It says something about the condition of the Bierman Track that the state high school track and field championships have been held at Division III Hamline since 2006, and before that at the National Sports Center in Blaine.

That’s the plan, Ryan said. Specifics, like choosing a track surface, will be worked out once the site is chosen. Ryan envisions a facility that can host invitational and championship meets, though not something as grand as the U.S. Olympic Trials.

Once demotion of the present track commences, Minnesota will shuttle athletes to and from Hamline and Concordia University in St. Paul for practice. Hamline’s team has used the Gophers indoor facility for years, and the Gophers are the only Division I team that regularly participates in the annual Hamline Invitational. The Athletics Village delay means Gopher runners can still use the Bierman track this fall, saving some anticipated transportation costs.

Even with a crumbling facility, Gopher track and field remains competitive nationally. Minnesota sent four men and seven women to the NCAA Championships in Oregon last June. Ex-Gopher Hassan Mead, a Minneapolis South High product, earned a bronze medal in the 10,000 meters at the U.S. Championships, a major step in the year before the Olympics.

Men’s track and field is often vulnerable when university athletic departments cut costs. Maryland dropped men’s cross country and indoor track in 2012, sparing outdoor track only after a fund-raising campaign. Since 2013, Temple, Coastal Carolina and Tennessee-Chattanooga have all dropped men’s track since. Schools generally need women’s track and cross country for Title IX compliance; Minnesota draws 45 percent of its female athletes from those sports, according to its gender equity reporting. (The numbers are a little skewed, however. The NCAA considers cross country, indoor and outdoor track as three sports. A woman who runs all three counts three times.)

Asked if he ever felt Gopher men’s track might be in danger of elimination, Plasencia paused for several seconds before saying no. “I never heard that from anyone serious,” he said. “I might have heard it on talk radio once or twice, but I never heard it from Norwood [Teague, the former athletic director] or Joel [Maturi, who preceded Teague].”

Last week the university extended Plasencia’s contract through June 2018, albeit without raising his base salary of $87,021. Kill just got a $300,000 raise to $2.5 million, and Pitino a $400,000 bump to $1.6 million. But for Plasencia, the extension meant the track program isn’t going anywhere. The final piece will be the new track.