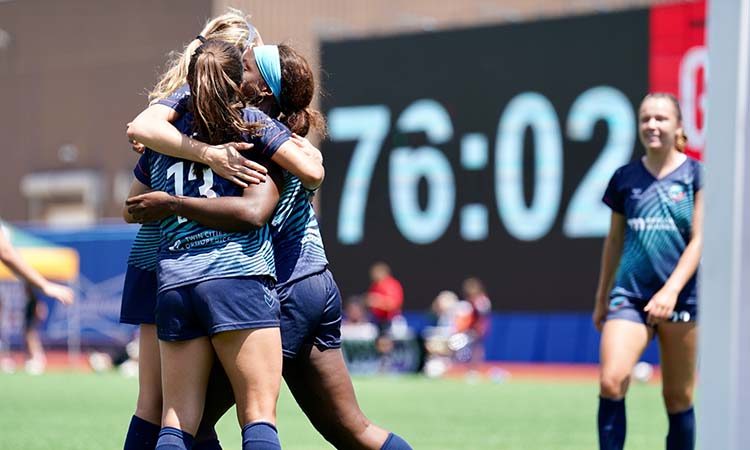 The move will enable the team to pay its players and jump on several other opportunities, says president Andrea Yoch.
By Tina Nguyen
November 10, 2022

In a bid to become a professional team, Minnesota Aurora FC is on the hunt for a majority owner with deep pockets, but president Andrea Yoch says the team’s community investment model isn’t going anywhere. In her view, going pro will only strengthen the team’s commitment to the community.

On Oct. 24, the team’s board informed its more than 3,000 owners that it was in discussions to join the National Women’s Soccer League (NWSL), the United States’ premier professional league. “Because of the overwhelming community support in our first year,” the board said, “we now have the opportunity to pursue a professional team far sooner than we initially expected.” Less than two weeks later, the Pioneer Press reported that team formally submitted a bid to join the NWSL.

Yoch says the decision to go pro would open quite a few doors for the team. That includes the ability to pay its players.

“Right now, as an amateur team, we have no payroll for the players,” she says. “If we move pro, then we pay the players. And so, that obviously costs quite a bit more money.”

The idea to go pro stemmed from a conversation Aurora FC president Andrea Yoch had with the NWSL head of expansion at the MLS-Allstar Game in early August. The NWSL rep encouraged Aurora to submit a bid to join the league in 2024.

“It’s a bit ahead of our schedule, but everything we’ve done has been on super fast speed,” says Yoch. “So if the momentum is there, we’re just going to keep going. If we don’t get an NWSL bid, it’s not a terrible thing. But the opportunity is there right now, so we figured we would go for it.”

The NWSL only has two spots open for 2024 in its league, which could make the team’s bid a long shot, Yoch says. The bid-submitting process was a strict one as well: The team was required to share information about its market, fan base, merchandise sales, sponsors, and overall presence in the Twin Cities. The NWSL also has a collective bargaining agreement for its players, which involves strict salary and benefits for those on its teams.

If the NWSL bid doesn’t pan out, Aurora has other options. There’s the USL Super League, a new professional women’s soccer league, which would involve Aurora moving up from its current pre-professional status in the USL-W league. Aurora is also in talks with the Women’s Independent Soccer League (WISL).

The decision to go pro doesn’t mean Aurora FC will depart from its pre-professional team, especially since the team is only one year into its five-year contract with the USL-W. Instead, Aurora will have a pro team and an amateur team.

“Part of our commitment to this team is to give women particular spaces they don’t get otherwise,” said Yoch. “Having a pre-professional team allows players to develop on the field and off the field.”

What does going pro mean for the community owners?

One of Aurora’s founding identities is that it is a community-owned and women-led team. In its first year, more than 3,000 investors were involved in Aurora’s launch campaign, giving them all a stake in the team and authority over its decision-making, including electing its board members.

But according to United States Soccer Federation (USSF) standards, going pro means the team will have to find a majority owner with a minimum 35% stake in the club and a net worth of at least $15 million. The community ownership model, however, is here to stay, says Yoch. The only changed element being the community owners will then be part-owners of a professional team.

“In any negotiations with a lead investor, we will say, ‘Look, we’re going to bring all of our assets to the table, and we still have to have this representation on the board. We have our community, and our voice needs to be heard no matter what the team looks like,’” says Yoch. “And if we can’t find that lead investor that’s willing to do that with us, then they’re not the right lead investor.”

Aurora is also looking for a majority owner that aligns in value with the team and will not compromise what the team stands for or what it represents in the community, says Yoch.

“Our preference is a female with a values alignment for us, who loves the community ownership model, and thinks what we’re building is special,” she says. “It doesn’t even have to be someone who knows anything about soccer, but someone who really believes in these opportunities we’re creating for women.”

Fans and players alike are evidently ready for the team to go pro. Yoch shared that a current player who heard the bid news plans to train harder in 2023 to move into professional soccer.

Meanwhile, Aurora aims to solidify its operation by hiring full-time employees, including a soccer operations position and CEO. Today, the team has just three full-time employees. Aurora is also having conversations with local individuals to become minority investors, and is exploring the possibility of doing another community investment campaign.

“I hope that we’ve proven to everybody that we are very committed to this community model. And that community and players come first; the soccer is secondary,” says Yoch. “But we also know that if we can go pro, the impact can be even greater. We hope our community owners are trusting that we are going to vet the lead investor and that they’re going to be someone that agrees with us.”