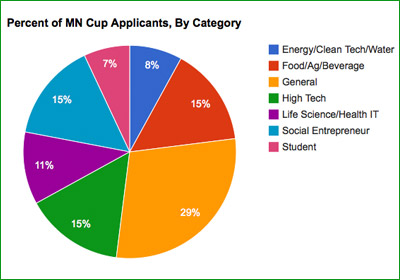 An analysis of the demographics of Minnesota Cup entrants sheds light on where the state’s start-up energy is thriving.
By TCB Staff
May 30, 2014

Last year, the Minnesota Cup awarded more than $200,000 in prize money to winners in six divisions and fielded a then-record 1,100 submissions.

This year, the same competition is offering $300,000 in seven divisions—and it received applications from 1,250 entrants. An analysis of those entrants gives us insights into Minnesota’s creative class.

For instance, the percent of entries per division are represented this way, according to information recently provided by the Minnesota Cup, which closed this year’s application window on May 9:

And a look inside the demographics of this year’s entrants tell us the following:

• 34 percent of the applications were submitted by women-led teams, and that number jumps to 45 percent when looking at entrants that include at least one female team member.

• 28 percent of teams are led by University of Minnesota alumni; 37 percent of the teams have at least one Gopher.

• 8 percent of teams are being led by someone who has served in the Armed Forces, with 10 percent having at least one military veteran.

• Greater Minnesota residents are represented in this year’s competition with 41 counties. (Since 2005, entrepreneurs from 74 counties have entered the Minnesota Cup.)

The Minnesota Cup provides an opportunity for entrepreneurs, inventors, or small business owners working on innovative new business concepts—or for those who have already started a business, but are generating less than $1 million in year revenue—to grow. The total number of the entries in the decade-long span of the competition is nearing 10,000, and finalists from the last five years have gone on to raise nearly $75 million to support the development of their business ideas.

Division semi-finalists will be announced on June 9, and the event will culminate with an event on September 10, at which point judges will announce a grand-prize winner from the category winners—which will be awarded $50,000 in seed money.