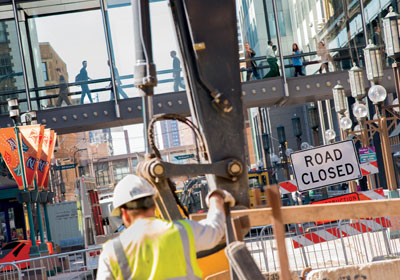 The $50 million Nicollet Mall renovation project is entering its second summer, with a third summer of construction to come next year. The pedestrian mall is out of commission, covered in construction equipment, earthen holes, and barriers. More than a few are grumbling about the modest project’s length and why it was staged to close the mall for three consecutive “patio seasons,” when restaurant and bar patrons flock downtown to enjoy the weather.

Difficulties obtaining bids for paving materials cost the project an additional summer, as its end date was moved from mid-2017 to end of next year. All the disruption to date has been to allow utilities to upgrade infrastructure under the street, and that phase has to finish before the cosmetic changes to the mall begin.

“This isn’t your typical street re-do,” says Jacob Frey, City Council member for the Third Ward, which includes the northern half of Nicollet Mall. “It tackles the guts, and it’s a massive overhaul of the public realm . . . that will be a centerpiece for our city.”

Frey shrugs off analogies to other construction projects around the metro, such as the one-year rebuild of Hwy. 169 from Golden Valley to Eden Prairie or the two-season rebuild and widening of Hwy. 100, calling them “apples to lasagna” comparisons.

Downtown Council President Steve Cramer is confident that the refreshed Nicollet Mall will make up for three summers of disarray.

He says this summer the Downtown Improvement District will roll out signage that helps preview the final results as a reminder of what all the dust and noise is in service to.

And Cramer says he believes that the two summers of utility work helps future-proof the street. “Once it’s done,” he says, “we’ll have 25 years of peace.” At least until the city needs to tear up the street to add a proposed streetcar. —Andre Eggert