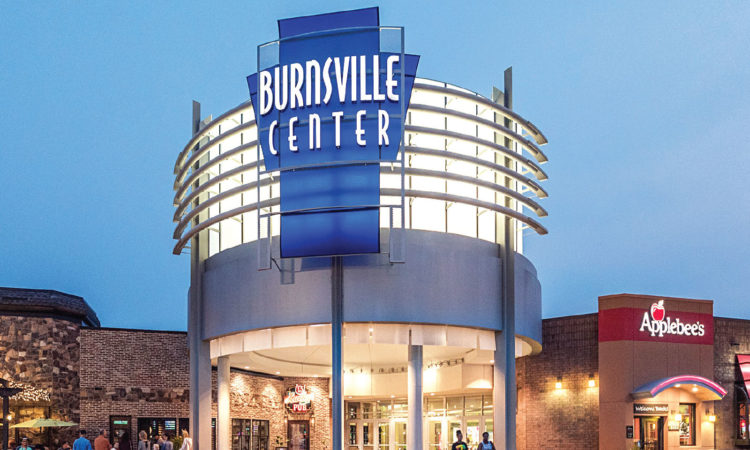 Despite a foreclosure and new ownership, the city remains hopeful about a new and improved downtown.
By Jenna Grundtner
February 23, 2021

It’s common knowledge that 2020 was a trying year for retail businesses (to say the least). Burnsville Center was no stranger to those struggles. Numerous vacancies have popped up in the mall for about five years, most notably the closure of Sears in 2017.

Then 2020 came. In August, the mall went into foreclosure; then-owner CBL Properties, a real estate investment trust, cited vacancies and rent reductions as the primary cause of the default. By year’s end, New York-based Kohan Retail Investment Group had purchased the mall.

Burnsville Center, which opened in 1977, remains open and relatively unchanged to customers. There are fewer stores to shop and masks must be worn, but otherwise it’s business as usual. But behind the scenes, the City of Burnsville has been brainstorming the next 30 years. Its comprehensive plan, known as the Burnsville Center Village Redevelopment Vision, aims to completely transform the mall and surrounding areas north and south of County Road 42 by mixing retail with housing, hotels, parks, entertainment venues, public transportation, and more—all to create a “Main Street type of feel.” Burnsville’s assistant community development director Regina Dean says the city hopes the current mall tenants will stay and be a part of the new community.

“The viability of it continuing strictly as retail is highly unlikely.”

Since the city does not own the mall and its surrounding properties, the project is entirely developer-dependent, Dean says. “We’re doing everything we can to eliminate any roadblocks.” The city has already rezoned from commercial-only to mixed-use.

Twin Cities real estate veteran Mike Sims, senior vice president at Launch Properties, agrees that Burnsville will need to reposition and incorporate various uses, as is the trend for malls these days. He says the center is well positioned, “with good access, good visibility, and strong traffic … but the viability of it continuing strictly as retail is highly unlikely.”

In late February, the Star Tribune reported that Kohan will likely sell some stand-alone buildings around the mall as part of the redevelopment plan. The developer previously told the paper that it shared most of the city’s goals. The company’s involvement will be necessary for any future developments, and the city has been eager to establish a relationship.

Time to Move On
The Tech 20 List: 2021
The Virtual Lobbyist
Duluth Builder Capitalizes on Sauna Surge

This story appears in the Feb./March 2021 issue with the title “Burnsville Center’s New Center.”